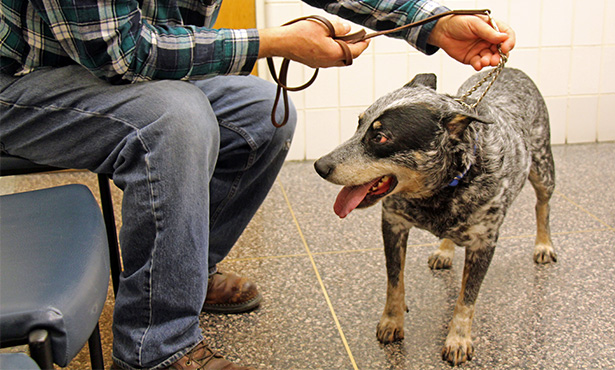 Betty and Bob Erickson got their first blue heeler because they raised cattle. Now it’s been 10 years since they last had any milk cows, but they haven’t given up on the blue heelers.

Shadow—at 8 years the oldest of the three dogs that comprise the Ericksons’ current herd—has brought the family to the University of Illinois Veterinary Teaching Hospital four times in four months to be cared for by the emergency, surgery, intensive care, ophthalmology, and dermatology services.

It started last summer. Shadow wasn’t doing well, and his local veterinarian prescribed a special dog food and pills to address a liver problem. That seemed to help for a while, but by December, things were bad again. 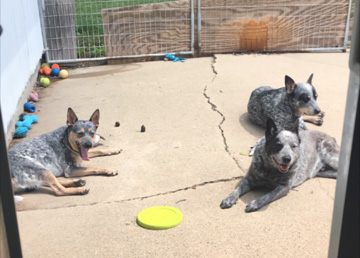 “Our veterinarian in McNabb sent us to Peoria for a CT scan of his stomach,” Bob recalls. “We came straight to U of I from Peoria for a gall bladder surgery. His stomach was all yellow underneath, and he was very sick.”

The hospital’s ER service checked Shadow in on a Friday night a couple of weeks before Christmas. The next day Dr. Christina Cocca, small animal surgery resident, performed the gall bladder surgery, and Shadow spent the next four days in the ICU, where Dr. Jessica Corrie, a surgery intern, continued managing his care with the help of the ICU staff.

In the course of managing Shadow after the surgery, a few other conditions came to light: hypothyroidism, first of all.

“We had to give Shadow a lot of pills when he came home,” says Bob. “We went through a lot of liver.” 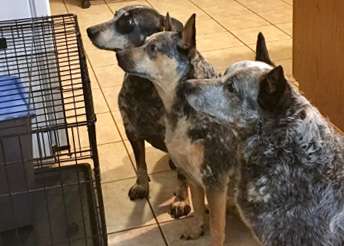 Treat time! Shadow (at the back) waits with Buddy and Patches for blueberries and peapods on a recent morning.

Liver is one of the strategies the Ericksons use to sneak the pills past Shadow. And of course, when Shadow gets a special treat, Buddy and Patches get some too, which accounts for the large volume of liver. Stick cheese is the subterfuge of choice for Shadow’s thyroid pills.

Another condition treated at the teaching hospital was dry eye. After consultations with the hospital’s ophthalmology service, Shadow now gets daily eye drops and considerable relief.

The ear infections are likely connected to an underlying allergy, so Shadow also got a consult with the dermatology and otology service, which is devoted primarily to skin and ear conditions.

On a day near the end of March, Shadow had a follow-up visit with veterinary dermatologist Dr. Jason Pieper and small animal intern Dr. Scott Miller. The ears and skin allergies were clearing up very nicely.

A wipe with medicated towelettes or an application of medicated mousse to the paws every few days should keep that in check, Dr. Miller advises. It will take a few days before Shadow’s thyroid test results come back, but the prognosis is that Shadow will now be making fewer visits to the hospital than he had over the previous four months.

“We’ll see you in June to recheck the allergies once the summer allergens get going, and after that we’ll need to see Shadow once or twice a year to monitor the thyroid condition,” says Dr. Miller.

With luck and continued spoiling by the Ericksons, Shadow will have a long and healthy life. The family dogs have set an impressive precedent for longevity.