Animal owners are often moved to make a generous gift in gratitude for the lifesaving care delivered at the University of Illinois College of Veterinary Medicine. The gift Karen Gupta made in recognition of the care provided to Sophie, her golden retriever, is a little different.

Sophie passed away August 1, 2019, after a brief illness. Although her dog spent only a short time at the Urbana hospital, Karen was deeply impressed by the kindness and expertise of the veterinarians and staff. Her gift honors Sophie, a pet that shared an uncommon bond with Karen and her two daughters, Reagan and Lauren.

“I know everybody says this, but our dog was absolutely exceptional,” Karen claims. “She was amazing from the very beginning, but she really became extraordinary when we moved from Florida to Illinois in 2013.”

Integral Part of the Family

A civil engineer by profession, Karen completely renovated the lakefront house they purchased near Springfield. “I built this beautiful home with Sophie, because she literally was in the passenger seat of my vehicle with me the whole time,” Karen says.

“People started to know us as ‘Karen and Sophie.’ We became so inseparable, I would walk in a place and someone would ask, ‘Where’s Sophie?’ as though I was missing half of myself. We had a great bunch of years.”

Sophie also routinely accompanied the family on vacations. Last summer, however, they decided to leave Sophie in Springfield rather than bring her to the hiking trip in Seattle because the dog seemed slightly lethargic, even though a trip to the veterinarian indicated nothing amiss.

At first, Karen received reassuring texts from the dog sitter that Sophie was doing well and eating her food.

“Then I got a text that she peed on the floor. I said, ‘Take her straight to a veterinarian right now. Sophie does not have accidents on the floor.’”

Shocking Report from the Vet

The report from the dog sitter’s vet was shocking. “She said, ‘Your dog is bleeding internally, and has been for some time,” Karen remembers. “The only chance she has for surviving the night is taking her to Urbana. There is nothing I can do here to help her. If anybody can find out what’s wrong, they can. I’m sorry, but your dog needs to go to U of I.’”

While the dog sitter volunteered to rush Sophie from Springfield to the Veterinary Teaching Hospital, Karen’s daughters, Lauren and Reagan, encouraged Karen to take the next plane home. En route to her midnight flight out of Seattle, she received a call from the hospital: Sophie’s heart was racing and she probably wouldn’t survive the night.

At her layover in Minneapolis, Karen called the hospital. She learned that a new doctor had just arrived and identified Sophie’s condition as stable.

“Dr. Ron said these words to me that were just magical,” Karen recalls. “He said, ‘I know you’ve been traveling all night. Sophie is stable and she’s had something to eat. That’s remarkable for a dog in her condition. All I can say is, drive safely, stop and get something to eat, and get here in one piece so Sophie can see you again. I will take care of Sophie; you take care of you.’”

Karen finally arrived at the hospital and “absolutely fell apart seeing Sophie,” she says. “They brought me to this room called Molly’s Place (created in 2017 through a gift from Ed and Judy Polzin for pet owners in times of stress or grief), and they brought Sophie to me. It didn’t feel at all like a clinical setting. The counselors let me cry and work through it. It was amazing.”

Dr. Goncalves said Sophie might have a form of cancer, but needed a CT scan to know for certain. However, a scan would require sedation, and Sophie’s chances of surviving the anesthesia were slim. Euthanasia was recommended.

Instead, “I asked if I could take her outside,” says Karen. “I took her for a walk in the circle, called my girls, and sat and cried.”

Ultimately, Karen asked to take Sophie home. “Dr. Ron and I agreed that she needed to try to ride with me, because my girls were arriving that night in St. Louis. It was worth the gamble to see whether Sophie could live long enough to see the girls again. And she did.”

A Peaceful Good-bye at Home

Sophie’s last few hours, back home in Springfield, were peaceful and filled with love. “We laid on the floor with her all day, trying to get her to eat or have an ice cube,” Karen says. “All the things we said she couldn’t do she could do that day. But she really didn’t want anything. She just lifted her head and handed her paw to one of us every so often, like ‘Hold my hand.’

“Then she laid in the grass by the trees, where the birds were chirping. We prayed for Sophie and let her go about 8 p.m., as the sun was setting. It was sad but so amazing.”

Shortly thereafter, Karen brought her daughters to the college and retraced every step she took with Sophie. “I wanted them to see Molly’s Place, the grassy area where we sat outside,” she says. “We came into the hospital and everybody thought we were there for a patient. I said, ‘No, I’m Sophie’s mom.’

“So many people said, ‘You’re Sophie’s mom? You have such a remarkable dog!’ ‘What a sweet girl!’ ‘She lit up everybody’s life.’ The staff was just remarkable. To walk through a facility and have so many people stop us and remember our dog, it was just amazing.”

The grief still lingers and Sophie will never leave their hearts, but the family continues their compassion for animals. Advocates of Springfield’s Animal Protective League that cares for sick and abused animals and a foster home for leukemia-positive cats, the family has fostered several pets and adopted one since losing Sophie.

“We have a foster kitten named Ivy, and have fostered a few dogs,” says Karen. “One of these we adopted on December 6. She’s a lab-mix puppy named Maddie, because she was found in Madison County.” 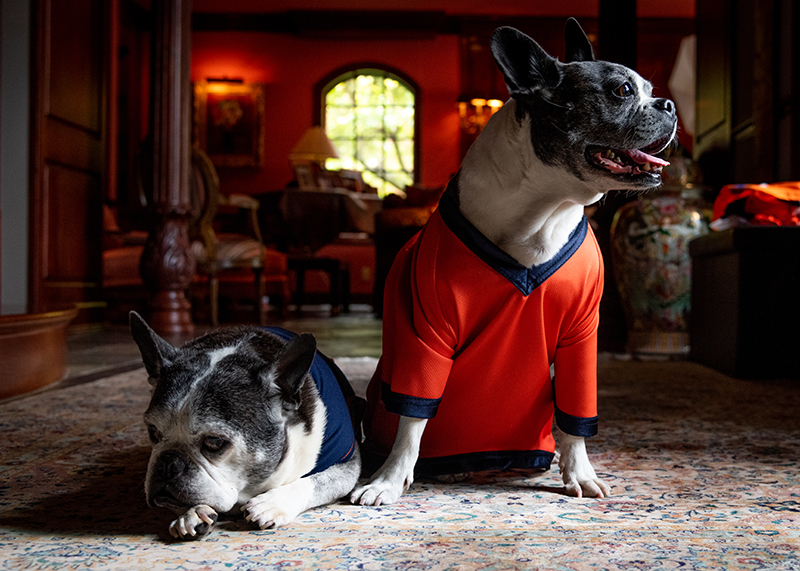