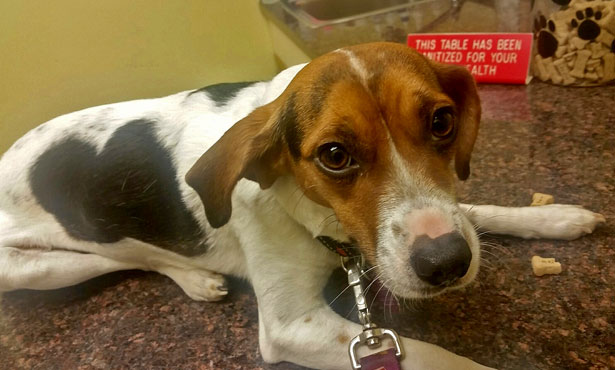 Lexi Goldstein, a two-year-old beagle-rat terrier mix from Elk Grove Village, Ill., is believed to be a record holder at the University of Illinois Veterinary Teaching Hospital. However, it’s a record no dog wants to break.

In January 2016, Lexi had more than 30 heartworms removed through her jugular vein in a painstaking, 90-minute surgery led by veterinary cardiologist Dr. Ryan Fries.

“I don’t think it’s commonplace, especially in Illinois,” Dr. Fries says. “Since people use heartworm preventatives a lot more, we don’t see it nearly as often. And for her, small dog that she is, I would say we removed a substantial amount of worms for her body size.”

Allan Goldstein, who owns Lexi with his wife, Terry, says they put their puppy on heartworm medication a month after obtaining her from a pet rescue facility in Arlington Heights. However, lack of knowledge about her background may have played a part in her potentially fatal condition.

“We saw her, fell in love, and took her home,” recalls Goldstein, whose previous family beagle was euthanized just months before. “But we had no information about her history other than she was picked up as a stray in Effingham. When we got Lexi they said, ‘We gave her a heartworm test. No heartworms.’”

Several months later, though, symptoms began to surface. “She became very listless,” Goldstein says. “She wasn’t eating, and worst of all, wasn’t drinking. She was becoming dehydrated.” After visits to a veterinarian, an animal hospital, and a battery of tests, the diagnosis: Lexi had caval syndrome, the most severe stage of heartworm disease.

That news turned the Goldsteins into heartworm investigators.

They learned the parasite causing heartworm is transmitted through the bite of an infected mosquito. “Except heartworm tests only work accurately when the worm is at least seven months old,” Goldstein says. “And only for male heartworms.

“When we got Lexi, she could have had heartworms that were a week old or six months old and they would have been undetected,” he laments. “We never thought of that as an issue.”

The issue suddenly became getting the heartworms extracted—quickly. “There was a vet in the Chicago area who could do it, but she didn’t have the right equipment,” Goldstein says. “It’s pretty sensitive surgery. Since we live in Illinois, we decided to take her to Champaign-Urbana.”

Goldstein, an aerial photographer and flight instructor, considered flying Lexi to the hospital, “but I wasn’t sure how she would tolerate her first flight, with all the noise and vibration,” he says. “She was miserable as it was.” They flew down I-57 instead, whereupon they received some troubling news.

“You really just have one chance, and 60 percent to 70 percent of dogs make it through,” Dr. Fries told them. “But that still leaves 30 percent to 40 percent who are going to die despite doing the right thing and removing the worms.”

The Goldsteins pondered the odds.

“We weren’t sure what to do,” Allan says, “but we figured a young dog probably could survive a whole lot better than an old dog, so we decided to go for it.”

Dr. Fries was assisted by students, fellow veterinarians, and technicians. “This was really an exciting thing,” he says. “None of them had ever seen anything like this. And of course, it was wonderful that everything worked out. She did phenomenally.”

Through the incision in Lexi’s jugular, Dr. Fries used a tiny retrieval basket to remove heartworms from the right atrium—taking great care not to break them apart into the bloodstream—two to three at a time.

In all, 33 worms were extracted from Lexi, each measuring a foot or longer. “Oh, they’re disgusting,” groans Allan. “I can’t eat spaghetti anymore.” And though she’s not completely out of the woods, still needing a series of shots to dissolve the few remaining heartworms that escaped detection during surgery, Goldstein says Lexi is getting stronger and acting more like herself every day.

“She’s a very well mannered dog,” he observes. “Whoever had her before we did trained her beautifully. She’s just the sweetest dog, a real sweetie.”