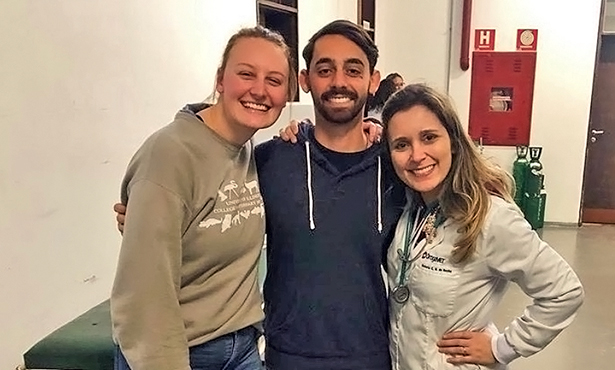 Editor’s note: Courtney Dixon (at left above, with fellow student and a Brazilian clinician) and Michael Greener traveled to Curitiba, Brazil, for an extended externship experience last summer. They each submitted a blog about the trip.

At the beginning of July, I jumped on a plane and headed off to Brazil for a three-week externship at the UFPR (Federal University of Paraná) Veterinary Hospital along with another Illinois veterinary student, Michael Greener. I had no clue what to expect out of the trip but was so excited regardless. After a long 24 hours of traveling I was met at the Curitiba airport by my amazing host, a second-year wildlife resident. I arrived on a Sunday afternoon and she gave me a tour of the hospital that night and let me help with treatments for her wildlife and exotics patients.

The first week, Michael and I were both on the small animal surgery rotation. By the time we got to the hospital at 7 am, there was already lots to do. The first surgery we were able to observe was a rectal pull-through surgery to remove a rectal mass. I was very impressed by the facilities at the hospital and the residents and fellow Brazilian students made us feel so welcome. When there were language barriers (though many of them spoke English very well), they were more than willing to look up words or draw things in order to communicate with us and even took us out to local restaurants for lunch! We were also able to observe a TPLO (tibial plateau leveling osteotomy), hind limb amputation, mastectomy, aural hematoma repair, inguinal hernia repair, PDA (patent ductus arteriosus) repair, and were able to observe many consults.

My second week I spent with the dentistry group. The dentistry resident was incredible and always took the time to explain procedures to me and translate her appointments for me. I was able to observe many dental extractions in both canine and feline patients and learn how various teeth are surgically extracted. We also performed a dental on a military canine with a fistula and root exposure and repaired a fractured tooth in a feline patient. The coordinator for our trip, Dr. Marlos Sousa, also brought us to the zoo with him during this week to observe an echocardiogram he was performing on an anteater. 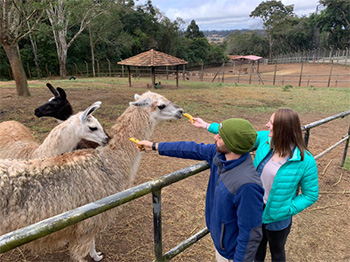 My final week I spent with the wildlife and exotics group. This department was constantly busy with surgeries, appointments, emergencies, and in-patient treatments. The residents on this rotation were amazing at teaching and allowing me to get hands-on experience handling and treating patients. I was able to draw blood from a rabbit, administer medications, and observe many procedures. Some of the procedures I was able to observe included a rabbit OHE (ovariohysterectomy) due to a pyometra, a wing amputation in an owl, an internal fixation for a broken femur in an Amazon parrot, treating a baby bunny for splay leg, and many more. Marlos also brought us back to the zoo during this week and organized a behind-the-scenes tour for Michael and me, where we were able to learn about each individual animal in the zoo’s care and observe how the zoo prepares food for all the animals.

I can’t even begin to fully explain how amazing and valuable this experience was for me. Everyone we met, from our host families to the residents and students at the hospital, were so kind and welcoming to us and made this an unforgettable trip. During our free time after work and on the weekends, our hosts and Marlos made sure we always had something exciting to do. From visiting all the parks in the city (and seeing capybaras!) to visiting the feira (the local Sunday market) to exploring the botanical garden and Oscar Niemeyer museum. They also made sure we tried all the local foods, including eating at a Churrascaria (Brazilian barbecue) and trying brigadeiro and quindim (local pastries). After our three weeks at the hospital, Michael and I hopped on a bus and spent two days at Iguazú Falls, where we were able to experience both the Brazilian and Argentinian views of the incredible waterfalls before heading back home to Illinois.

I am so grateful to Marlos, the UFPR Veterinary Hospital, and my host family for this experience. I had an incredible time, met amazing people, and learned so much (even a little Portuguese!). Obrigada, Brazil! 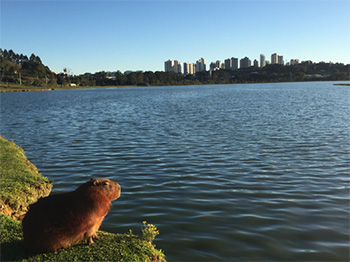 A capybara in a Curitiba park.

My externship at the Universidade Federal do Paraná, Curitiba, Brazil, was an unforgettable experience. I performed many procedures on a variety of animal species, had the opportunity to meet professionals in my field, and improved my Portuguese language skills. Being a half Brazilian and half American veterinary student, I found studying abroad in Brazil to be an amazing journey to learn about my family’s roots. I experienced a Latin culture, and I had the opportunity to see more of this beautiful country that I can also call home.

During the first week in Brazil, I worked in the small animal surgery clinic. I got to see so many surgeries I’ve never seen before, such as a rectal tumor removal, a TPLO, a hindlimb amputation, mastectomies, and an inguinal hernia repair.  All procedures that I saw were done on dogs.

The coolest procedure was the removal of a dioctophyme renale, which is a parasitic worm in the kidney. The veterinarian had to remove the infected kidney, and the parasite measured longer than from my fingertips to my elbow.

Hands-on with Exotics and Wildlife

During the second week in Brazil, I worked in the companion exotics and wildlife clinic, which allowed me to have the most hands-on experience. On the first day, I participated in an echocardiogram on an anteater at the local zoo after its diet was changed. By the end of the week, I took vital signs from a number of different animals, as well as administer SQ and IM injections, drew blood, prepped animals for surgery, and even catheterized a rabbit’s ear!

I enjoyed observing leg and wing amputations, rat spays, splints put on birds and rabbits, and analyzing X-rays of chinchillas, birds, and rabbits. I palpated a chinchilla jaw, which had inadequate tooth wear syndrome. What I found the most interesting was that in Brazil, doctors prep and scrub the animals differently for surgery than what I had been taught in school.

The third week I hopped around in different specialties, but mostly found myself in the exotics and internal medicine wards. I saw a bird called sabiá with a broken carpus. I also had the opportunity to see a tropical screech owl with a broken tarsus/metatarsus and an eye that had to be enucleated. It was really interesting to see the ultrasound of the eye before and after the procedure was done.

While we were conducting a physical exam of an owl, a pseudolynchia canariensis (it’s common name is pigeon louse fly) flew out of the feathers! I also saw the stabilization of a broken peacock leg. In internal medicine I restrained animals for ultrasounds, assisted with the placement of urethral catheters, and saw a thoracentesis being done to a dog. I also watched a surgery that fixed a patent ductus arteriosus in a dog. It was an amazing experience to watch!

We also had a behind-the-scenes tour of the local zoo. At the zoo we got close with tigers, giraffes, hippos, monkeys, tapirs, and many others. We even got to feed many of the animals!

While abroad, I was able to witness a new system of veterinary learning and practice. Veterinary medicine is a five-year bachelor’s degree program in which students complete only a half-year of clinical rotations. There are no internship programs, and students can go directly to a two-year residency. For this reason, most Brazilian vet students choose to do a residency. A major difference is that in Brazil, there are no veterinary technicians, so the veterinarians have to do everything, including restrain, monitor, perform surgeries, and deliver anesthesia. 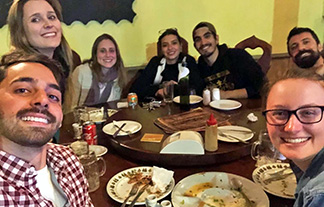 Although I had the most hands-on experience than I ever had thus far, I also got to do many fun things outside the school since the staff was so welcoming. Professor Marlos took us around the city of Curitiba. He showed us the lookout tower, Bosque Alemão, (German forest), Parque Tingui (the Ukrainian Memorial) and Tanguá Park and treated us to feijoada (Brazil national dish) for lunch.

One time we had a churrasco (Brazilian BBQ) with the cardiology residents and our hosts. My host barbecued the meat, and it was so delicious! We explored Vila Velha State Park, Feira Hippie (a street fair with food and arts and crafts), the botanical gardens, Museo de Olho, and Brazilian bakeries to taste desserts like brigadeiro and quidim. It was so nice to be able to explore Curitiba with locals!

Courtney and I also had the great opportunity to visit Iguazu Falls. Iguazu Falls is the largest waterfall system in the world. It was definitely one of the most beautiful sites I have ever seen. I highly recommend this externship at UFPR in Curitiba to whoever wants lots of hands-on experience and likes good food, desserts, and a beautiful city to explore!