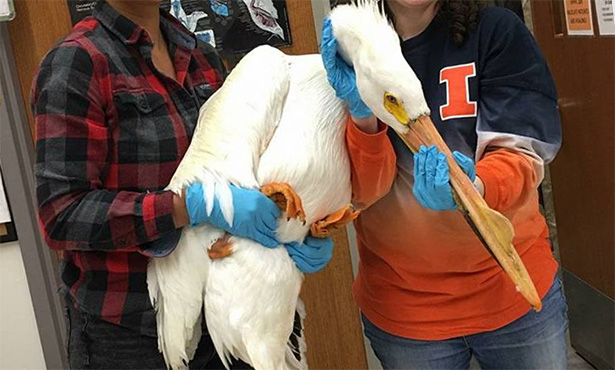 The bird will be released on April 30

An American white pelican that was found shot at the Newton Lake State Fish and Wildlife Area in Jasper County is ready to return to the wild, according to veterinary caregivers at the Wildlife Medical Clinic, part of the University of Illinois College of Veterinary Medicine in Urbana.

The pelican has recovered from the gunshot wound and subsequent lead poisoning.

Wildlife clinic leaders are planning to release the pelican on Monday, April 30, near Clinton Lake, where migrating pelicans have recently been spotted. Clinic leaders are hoping that the recovered pelican will join others of his kind on their spring migration from coastal United States to the Great Lakes and Canada to nest. (Watch a video of the release below.)

This pelican was the only survivor among a group of pelicans shot on April 3; five others died. Conservation police with the Illinois Department of Natural Resources (IDNR) brought the surviving pelican to the wildlife clinic for treatment. On April 14, charges were filed against two Newton, Ill., teenagers in connection with the illegal shooting of the federally protected birds. 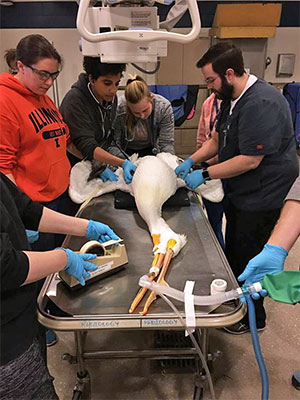 Volunteers on the pelican’s care team prepare the anesthetized bird for a radiograph (x-ray).

Although Illinois is in the migratory pathway of American white pelicans, this is the first pelican treated at the Wildlife Medical Clinic since 2012.

Dr. Sarah Reich, an instructor who oversees the Wildlife Medical Clinic, said the pelican, which ate almost 40 pounds of fish during his three-week stay, definitely made a lasting impression on the clinic’s student volunteers.

“Despite his injuries and weeks of care, he remained as sassy as we could hope for in this species,” she reported. “He was a rewarding patient and a welcome guest in the clinic, but nobody is going to miss the constant smell of fish in the clinic!”

The Wildlife Medical Clinic cares for about 2,000 ill or injured animals each year. All expenditures for food, diagnostic tests, equipment, medications, consultations, and surgeries for the clinic’s patients are covered through donations from the public.

To make a tax-deductible donation toward the cost of caring for wildlife patients, please visit our website or mail a check made payable to the University of Illinois Foundation to: College of Veterinary Medicine, Office of Advancement, 2001 S. Lincoln Ave., Urbana, IL 61802.