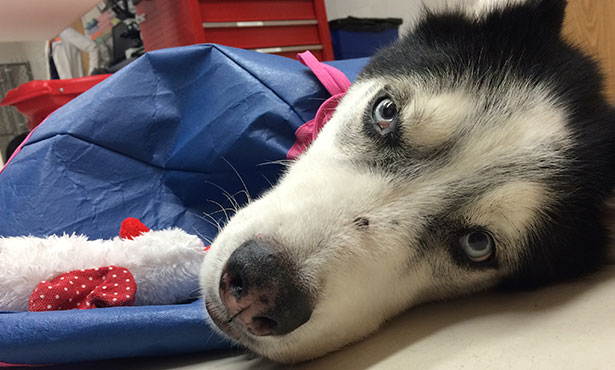 Clay Johnson says of his 14-year-old Siberian Husky, Ayden, “With his life story, you could write a book on this dog.”

It would be a tale of survival. Ayden was “rescued” by the Johnsons at eight weeks from a family whose previous three Huskies were hit by cars. He fell off a two-story roof and escaped virtually unharmed, but had to be neutered a second time due to the impact. (“He has really hated vets since then,” Johnson notes.)

In his latest and most impressive act of doggedness, Ayden has overcome the removal of not one, but two large cancerous masses from his right shoulder. The second, about the size of a cantaloupe, was extracted in August 2015 at the University of Illinois Veterinary Teaching Hospital.

In and out of the hospital nearly four months due to complications, the 80-pound Husky became the hospital’s equivalent of a house pet. “There was absolutely a special bond,” says veterinary technician Michelle Jaeger, Ayden’s daily contact during his stay who helped create a “napping nook” for him outside of his cage. “He just had a special personality. With Huskies, oftentimes their temperament causes them to be hesitant around people. But he was just phenomenal.” 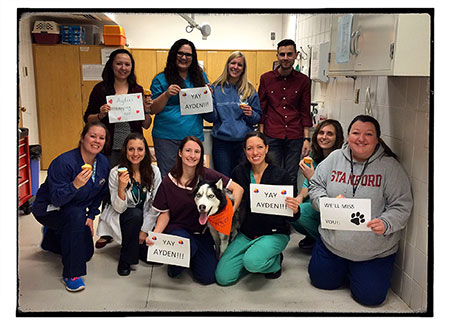 The staff grew so attached to Ayden, they threw a going-away party upon his discharge. “We tried to get all the students and doctors back that had helped with his care so we could take a big picture with him,” veterinary technician Michelle Jaeger says.

Johnson, who lives in Cayuga, Ind., says Ayden’s first tumor appeared when he was 12. “It was massive,” he recalls. “I mean, he couldn’t turn his head to the left.”

A local veterinarian removed the mass, but misdiagnosed it as noncancerous. When another lump appeared in the same area three months later, “obviously he didn’t get it all,” Johnson says. “I was done messing with the local vet. I called the U of I to schedule an appointment.”

Recalls Dr. Laura Selmic, assistant professor of soft tissue and oncologic surgery, “He came to us with a large mass, and unfortunately it was behaving quite aggressively. It was in a tough area to remove big masses from, because it’s an area that’s in constant motion when the dog is walking.”

The Johnsons were presented with options. “One was to take his leg, which would have been easiest in terms of making sure all the cancer was gone,” Clay says. “But he’s our grown-up kid. We just couldn’t do that to him. I know dogs adapt, but nothing else was wrong with him. I didn’t want him to wake up and think, ‘Hey, where the heck did my leg go?’” Thus, an operation to remove the second mass was performed by surgical resident Dr. Bridget Morton, under Selmic’s supervision. So extensive was the surgery that Velcro straps were used to stretch his skin and aid in healing. And healing was by no means an easy process.

“He’d be home a day or two, and his stitches would bust open,” says Johnson. “We have two kids, and he’d get excited. That happened twice. He got an infection. Then he ate some of his bandages and they had to do another surgery to get them out. That’s when we said, ‘No, keep him there until he’s healthy.’”

The hospital team went above and beyond to accommodate their long-term patient. “He was a super picky eater, so we had to coerce him,” says Jaeger. “Students and I would cook pasta and bring it in for him. At one point he wasn’t eating so I brought him a McDonald’s hamburger. He ate that.”

[Note: We are not advising a diet of fast-food for your average picky eater. And we definitely made sure Ayden’s hamburger did not include onions, which can be toxic to dogs!]

The staff grew so attached to Ayden, they threw a going-away party upon his discharge. “We tried to get all the students and doctors back that had helped with his care so we could take a big picture with him,” Jaeger says. “As we were all posing for the pictures, he didn’t care about any of that. He suddenly dove and stole a cupcake out of somebody’s hand.”

“They were amazing, the stuff that they did,” marvels Johnson. “They took very good care of him. Physically he’s healthy and close to where he was before, he’s still active and wants to play occasionally. He’s a great kid.”