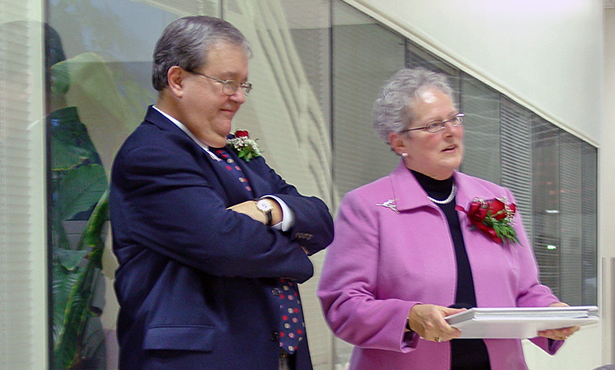 Terry Rathgeber, former associate dean for development and alumni affairs, passed away on Tuesday, April 21. Rathgeber grew the college’s advancement, alumni relations, and communications services over more than three decades. He seemed to know every veterinary student during his tenure, and maintained relationships with them as alumni and practitioners, often playing headhunter to match new graduates to jobs at Illinois practices. He will be greatly missed.

Rathgeber was hired as college editor in 1971. He founded the Veterinary Report newsletter and the weekly pet column program. When the university’s Urbana campus launched its first fundraising campaign in the 1980s, the college conducted a national search for its first development officer and chose Rathgeber.

Major gifts received under his guidance include the Edith Kosterka Equine Reproductive Program and the college’s first endowed faculty chair through the Billie Alexander Field Memorial Fund. The Companion Animal Memorial Fund is just one of the fundraising programs he implemented.

During his tenure Rathgeber oversaw the dedications of the Veterinary Teaching Hospital in the 1970s and the Basic Sciences Building in the 1980s as well as the celebration of the college’s 50th anniversary in 1998.

Upon his retirement in 2003 he cited with pride his role in growing the endowment for student scholarships and finding support for the Wildlife Medical Clinic, CARE Grief Helpline, and Zoological Pathology Program. Rathgeber also helped found the national Association of Veterinary Advancement Professionals and served as its president.

His contributions to the college were recognized with the Special Service Award in 1994 and the Academic Professional Excellence Award in 1995, which was endowed and renamed for Terry and his wife Judy at his retirement. (The image above was taken at the retirement reception for Terry and Judy in December 2003.)

In 2005, Rathgeber was named an honorary life member of the Illinois State Veterinary Medical Association in recognition of his vital role in advancing the veterinary profession in the state.