Dr. Paul Davis and Dr. Karin Crocker are both proud graduates of the University of Illinois College of Veterinary Medicine … 17 years apart. 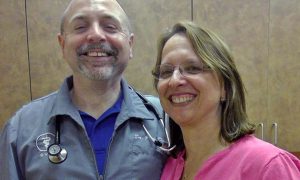 Dr. Paul Davis and Dr. Karin Crocker created a scholarship for Illinois veterinary students from the St. Louis Metro East area. In the photo at top, they are at the left with the staff of the Davis Pet Hospital. Their associate Dr. Edwina Schmitz (just left of center in black leggings and a red V-neck shirt) is also an Illinois graduate, Class of 2009. Can you guess what baseball team they favor?

Yet they met, fell in love, and married 170 miles southwest of the Urbana campus in Collinsville, Ill., part of the Metro East region bordering Missouri in the greater St. Louis area. It was there they decided to build their life together. It was there they established the Davis Pet Hospital in 2012, an exclusive small animal practice that continues to thrive.

And it is for that area they decided to endow the college’s new Dr. Paul Davis and Dr. Karin Crocker Scholarship, created to provide financial support to Illinois veterinary students from the Metro East region.

‘Help people from our area’

“The cost of going to vet school continues to rise, and we liked the idea of being able to help students not have quite so much debt when they finish,” explains Dr. Crocker, whose practice interests include neurology and gastroenterology. “We wanted to help people from our area, who will hopefully choose to come back to this area to practice.”

Aren’t you in effect creating your own potential competitors?

“Or, our future employees,” Dr. Crocker says with a laugh. The couple knows full well the difficulties of building a practice from the ground up. That was the path they opted to take, rather than buying an existing business.

“I was an associate at several Metro East practices all my career prior to that,” Dr. Davis says. “I realized I had a number of folks who followed me as I moved, more than I expected, so I felt like I had a small base to begin with. But I knew we needed a lot more to have a successful, viable practice, so it was absolutely scary to do it.

“We talked about it for several years. But the main issue we saw with buying an existing practice is, you don’t get the absolute perfect fit for you. You may be overcoming some negative culture rather than just starting from scratch. So we decided to open our own.”

‘Be versatile in what you’re willing to do’

That wasn’t the first major life decision the two made. They met in 1994 while working at the local emergency practice. With Paul’s encouragement, Karin elected to return to school and earn her veterinary degree at the U of I after more than 20 years as a technician. 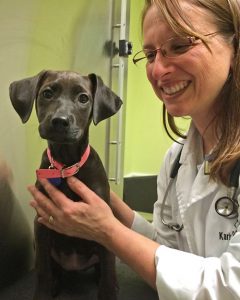 Dr. Crocker attributes some of her success in pursuing her veterinary degree to “stubbornness.”

“I always wanted to do it, but different things happen in life and you get off track,” she says. “We weren’t married at the time, but we were together, and he encouraged me to do what I wanted, so I worked hard and made it happen. I think it was stubbornness.”

Any advice for budding veterinary students who might wish to apply for their scholarship?

“I think my best advice is to be versatile in what you’re willing to do, both surgically and medically,” says Dr. Davis. “I know veterinary schools are turning out lots and lots of specialists now, so I think many vet students who go into general practice assume, ‘Hey, I’m going to refer X surgery or Y medical case.’ But when I started out in a small town, every time I suggested somebody drive to St. Louis for a knee surgery or anything else they would balk and say, ‘We’re not driving that far. You fix it.’ It certainly helped as we started our own practice, being able to do a lot of that ourselves.”

‘A lot of hours, no matter how you look at it’

That remains the case today, as the Davis Pet Hospital

handles emergency surgery, internal medicine, and a full array of small animal services. While they attended the College of Veterinary Medicine in different eras, Drs. Davis and Crocker do occasionally compare their educational experiences.

“We actually had a few instructors who were the same,” Dr. Crocker, a 2009 graduate, marvels, “but we talk about how different it was between our times there. A lot of things hadn’t changed. It’s still a lot of hours, no matter how you look at it.”

When not at the hospital, or at home with their golden retriever Percy, German shepherd Aili, and brown tabby cat Rue, Dr. Davis is an avid bass fisherman. “I’ve been in a bass club for 20-plus years,” he says. “It’s my only other addiction besides work. And even with fish, we try not to hurt them. We throw them right back as soon as we weigh them.”

Does Dr. Crocker accompany him?

“Oh, I don’t touch fish,” she says, laughing. “We joke with all the younger people on our staff, you need to have different hobbies from your significant other. Because there’s going to be a time you’ll want them to go away.”—Jim McFarlin