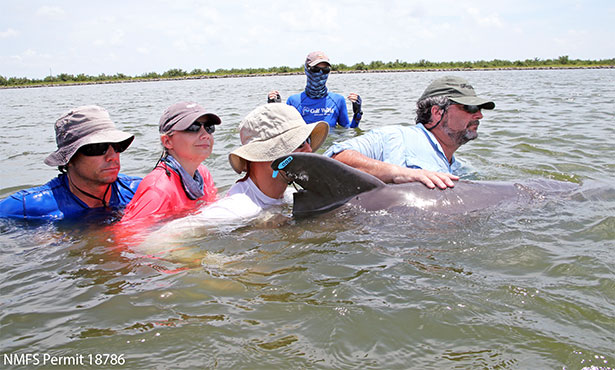 The 2010 Deepwater Horizon oil spill is considered one of the worst human-induced environmental disasters in history. Nearly 800 million liters of oil poured into the Gulf of Mexico, killing thousands of marine-dwelling species. In an effort to further understand how the toxic effects of oil have impacted dolphins and other marine mammals in the region, the Gulf of Mexico Research Initiative has issued a grant that is being co-investigated by University of Illinois College of Veterinary Medicine faculty member Dr. Kathleen Colegrove.

Because dolphins are a long-lived, slow-to-reproduce species, it could take 30 to 50 years for dolphin populations to recover from the Deepwater Horizon spill….

Dr. Colegrove’s passion for marine health has catalyzed an impressive research career. Her current role as a clinical associate professor with the college’s Chicago-based Zoological Pathology Program taps into her training in marine biology, comparative pathology, and veterinary medicine. An interest in how a changing environment can affect marine organisms led to Dr. Colegrove’s involvement in the aftermath of the oil disaster.

She served as primary pathologist during a five-year study conducted for the National Resources Damages Assessment (NRDA), which investigated an unusual dolphin mortality event that had developed in the wake of the spill. The new grant funding that serves as a follow-up to NRDA was released in January 2018, and research will continue through 2019. Officially titled the Consortium for Advanced Research on Marine Mammal Health Assessment (CARMMHA), this project will identify the long-term effects of oil on bottlenose dolphins.

“When completing the initial work for the NRDA, we needed to use the best information possible to find out exactly what the damages were after the oil spill,” Dr. Colegrove explained. “The dolphins residing in estuaries and bays closest to shore provided the best data, and the initial population projections were based on those stocks of bottlenose dolphins. We assume that similar damages will be seen in dolphins that live a bit further from shore. Research now will include health assessments of bottlenose dolphins from the Northern Coastal-Stock.”

CARMMHA is a multifaceted project that will integrate information collected prior to, immediately following, and eight years after the Deepwater Horizon oil spill. There are many known adverse physiological effects on dolphins and other marine life resulting from oil exposure. Reproductive failure, poor body condition, increased rates of infection, and lung and cardiac disease are some of the known outcomes. Dr. Colegrove’s expertise will serve in investigating cardiotoxicity—heart dysfunction or muscle damage—in coastal-stock dolphins.

Recent evaluations of marine mammals in the Gulf of Mexico have suggested a presence of cardiac abnormalities. Using a population of dolphins well-cared for by the U.S. Navy as a model, the CARMMHA team will work toward developing diagnostic techniques that can be applied in field assessments to characterize the current cardiac health of dolphins in the oil spill footprint.

Later in the year, Dr. Colegrove and a team of scientists and veterinarians will travel to Barataria Bay, La., a region that took the brunt of the impact from the spill. Health assessments on selected bottlenose dolphins will be performed in the shallow waters of the bay. In the hands of well-trained veterinarians, dolphins will receive a comprehensive medical examination including diagnostic ultrasound, blood sampling, biopsies for skin lesions, and even dental x-rays. The innovative assessments will enable veterinarians to determine the health status of each dolphin and whether there are continuing health effects of oil exposure. (The photo above shows Dr. Colegrove, wearing read, assisting in a dolphin health assessment conducted for the earlier study.)

The research team does not face an easy task. Several health factors must be taken into consideration when observing the dolphin stocks.

“There is a great deal of human-induced pressure on wildlife; you have climate change, fisheries interactions, and environmental disasters making impacts on wildlife populations,” Dr. Colegrove explained. “Because dolphins are a long-lived, slow-to-reproduce species, it could take 30 to 50 years for dolphin populations to recover from the Deepwater Horizon spill, and additional human-induced pressures could make the effects even worse. We’re using a stepwise approach to determine the immediate, intermediate, and long-term effects of oil exposure.”

The Gulf of Mexico Research Initiative has also aided in the funding of a soon-to-be-released documentary titled Dispatches from the Gulf 2. Narrated by actor Matt Damon, the film investigates the impact of the Deepwater Horizon oil spill on the Gulf of Mexico in its entirety. Dr. Colegrove and fellow team members contributed research findings to a subsection of the film, “The Dolphins of Barataria Bay,” which tackles the problem of reproductive success following the spill.

Featured photo courtesy of the National Oceanic and Atmospheric Administration