In January 2017, Marshall County (Ill.) Sheriff’s Deputy Bob Vester and his 10-year-old German Shepherd partner, Flits, were hailed as the 2016 K-9 Team of the Year by the Central Illinois Police and Working Dog Association.

Less than two months later, the livelihood, life, and limb of the police dog were severely threatened after Flits fell through the drop ceiling of a pharmacy while pursuing a burglary suspect. The one-story plunge left him with a multiple fracture of his left front leg—an injury so severe that initially, amputation was considered as a potential option.

“We went from Team of the Year to possibly not working anymore in a couple of seconds,” recalls Vester, a 10-year veteran of the department. “It was not a good time.”

The times are more promising now. Thanks to the surgical skills and rehabilitation techniques at the University of Illinois Veterinary Teaching Hospital, not only has Flits’s leg been reconstructed, but Vester also believes his partner may be able to return to active duty later this year.

“Dr. Duffy [Daniel Duffy, the hospital’s orthopedic surgeon who performed the operation] says he was kind of hoping for August, but he wants to take it one week at a time,” says Vester.

“He said if Flits gets to come back, it will be a win. Right now, we’re mostly just shooting to make sure he is able to walk and function without any pain. Anything other than that is a plus.”

Flits, the name given to him in his native Belgium (“It’s actually Flits von Hoffen, then a big long thing after that,” Vester says), suffered what is called a comminuted, or multiple, fracture of his ulna, one of the two bones in his forearm. “What made it very difficult is that the fracture extended all the way to his elbow joint,” Dr. Duffy explains.

“When dogs have an injury like that, the bones have to be reconstructed perfectly to be able to function long-term. It would not have been wrong to amputate him. He could have been a pet, absolutely, with three limbs. But with a dog like this and the work he does, they put thousands of dollars into training and he would not have been able to work again.

“So they brought him down here and we talked about options,” Dr. Duffy says. “Given the state of the fracture and what I could offer them, they decided to go forward with surgical intervention.”

The two-hour, minimally invasive procedure included use of an arthroscope to assess the extent of the damage, separating and realigning the fractured segments, then inserting a metal plate and screws to stabilize the limb. (Read an account of the surgery written by Dr. Duffy.)

“Then, to encourage him to heal, we injected stem cells from the top of the shoulder and bone graft,” Dr. Duffy says.

“The plate will stay in permanently. Provided he doesn’t undergo any complications, like infection, plate loosening, or the like, he will live with that plate for life.” 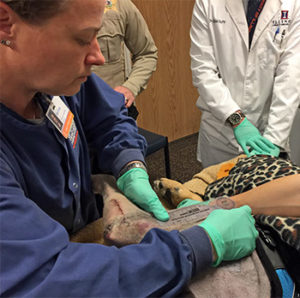 Flits, the only police dog in Marshall County, now undergoes a regular, intensive rehabilitation schedule at the hospital. His treatments are spearheaded by nationally respected certified veterinary technician Kim Knap, winner of the 2016 American Hero Dog Award for veterinary technicians by American Humane.

Flits and Vester have been partners for five years, after Vester accepted the canine officer position at the sheriff’s department. “It’s something I just always wanted to do,” Vester says. “I’ve always been amazed with what the dogs can do. When the opportunity came up and they offered it to me, I jumped on it.”

Now Vester is optimistic that the special bond he and his partner have formed will continue on patrol. “At one time we were told 100 percent not,” he says. “Now it’s looking as though he should.”

Meanwhile, after details of Flits’s injury, operation, and rehab were posted on the department’s Facebook page, contributions have been flowing in from across Illinois—and beyond—to help defray the shepherd’s medical expenses.

“I just put it out there and it kind of exploded,” marvels Vester. “We’ve gotten donations from Texas, out West, Washington, D.C. We’re kind of proud of the fact that zero tax dollars go into our K-9 program. It’s all done off of donations, and the fines we receive whenever we get an arrest. We always say, ‘If we don’t work, he doesn’t eat.’ But this has been awesome. It’s not at all what we expected to happen.”