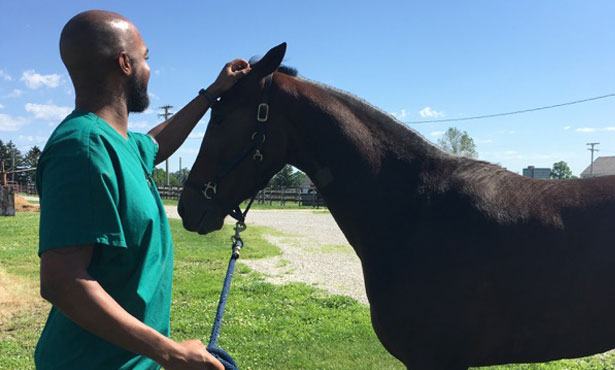 In late April, a Standardbred race horse was brought to the University of Illinois Veterinary Teaching Hospital showing signs of lameness. A couple of x-rays revealed a simple incomplete fracture of a bone just above the hoof on the left hind leg. Treatment options included surgery or conservative treatment, where the leg would be placed into a cast.

For personal reasons, the owners decided that it was not in their best interest to treat the injury and instead opted for euthanasia. Although Dr. Erica Secor, an equine surgery resident who was overseeing the case, understood and respected the owners’ wishes, she decided to look for alternative solutions.

Dr. Secor conferred with other residents and with the consent of the owners decided to look for a new home for this horse. She and her colleagues contacted as many interested people as possible. Jeremy Smith, a senior veterinary student from Ross University who is on rotations at the hospital, decided to meet him to see if they were a good match.

“He came over and put his head on my shoulder. All I could think was, ‘Oh God; this is it. I think I’m going to do it.’” Smith adopted the horse right then and there. Soon they gave him a new name, Wilson, based on the volleyball Tom Hanks’ character named in Cast Away.

Wilson’s treatment plan is several months long. He is spending the first six weeks of treatment on stall rest at the University of Illinois Horse Farm under the care of Molly Baldes, a research associate in the Department of Animal Sciences, and her undergraduate helpers. Over the first two weeks of his treatment, Wilson’s leg was in a hard cast. By the third week, the cast was replaced by a bandage, giving the bone a bit more responsibility to provide support. For most of week five and six, Wilson wore his bandage during the day but not at night.

Soon Wilson will be regularly walked on a lead to get him more used to using his leg. About six months after the fracture, Wilson will be able to do more strenuous activity, such as running around the pasture.

During his time on stall rest, Wilson went a little “stir crazy” and decided to go visit one of the pastures near his barn. By figuring out how to remove one of the clips on his pen’s lock, he was able to open the door and go on an adventure. Since Wilson is close to being healed and they don’t want him to get injured again, his pen now has a tougher lock.

Wilson will not return to racing. Instead he is going to be living a life of luxury as Smith’s pleasure horse. Smith will be able to let Wilson do his own thing at pasture like socializing, grazing, or running, while also taking him for trail rides whenever Smith has some time away from rotations.