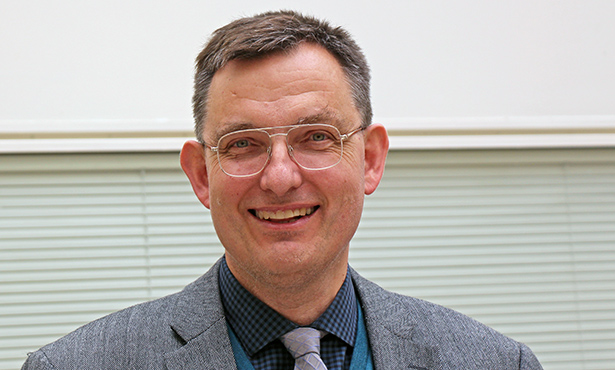 The University of Illinois College of Veterinary Medicine welcomes Dr. Uwe Rudolph as professor and head of the Department of Comparative Biosciences. Dr. Rudolph most recently held the dual positions of professor in the Department of Psychiatry at Harvard Medical School and director of the Laboratory of Genetic Neuropharmacology at McLean Hospital, an affiliate of Harvard Medical School. He was also an affiliate of the Stanley Center for Psychiatric Research at the Broad Institute of MIT and Harvard.

The institutes at this university are offering interdisciplinary collaborative opportunities that are not available elsewhere.

“His recruitment will immediately impact our campus,” said Dr. Peter Constable, dean of the college. “His research interests intersect extremely well not only with those of the comparative biosciences department but also with the Institute for Genomic Biology, the Interdisciplinary Health Sciences Institute, the campus-wide Neuroscience Program, and the Carle Illinois College of Medicine, to name a few.”

Indeed, those programs helped draw the international scholar to Illinois.

“He is an outstanding international scholar in the fields of neuroscience, pharmacology, and molecular genetics,” noted Dr. Jodi Flaws, a professor of comparative biosciences who served as interim department head. “Dr. Rudolph’s work on the mechanisms underlying the pharmacological functions of neurotransmitters is of the highest quality and considered by scientists from around the world to be the seminal work in the field.”

Dr. Rudolph, who has maintained licensure as a physician in Germany since 1987 and was certified there as a medical specialist in pharmacology and toxicology in 2004, feels as comfortable at a veterinary college as at a medical college. Research has been his focus throughout his career.

“Since graduation from medical school my ‘patients’ always had four legs,” he noted wryly. “Advances in basic scientific understanding of physiological and pharmacological processes can be translated into an improvement of animal health as well as human health.”

A current example was published in Nature Communications this month. A compound that acts on the neurotransmitter receptors that Dr. Rudolph studies was found to suppress itch in a mouse model and in dogs, whether or not histamine played a role in stimulating the itch. This finding has obvious therapeutic applications in veterinary medicine.

A Foundation in Medicine

Dr. Rudolph’s studies began with medical training in his native Germany and included one year of studies at the University of London; in his final year he was also a visiting student in internal medicine at the Massachusetts General Hospital in Boston. He earned a doctorate for a biochemical research thesis on signal-transducing G proteins from the Free University of Berlin, completing the combined medical and scientific training after eight years.

He then came to the United States for a postdoctoral fellowship with Dr. Lutz Birnbaumer at Baylor College of Medicine, in Houston, Texas. Working in the laboratory of Dr. Birnbaumer, now a member of the National Academy of Sciences (NAS), Dr. Rudolph was first author on papers in Nature Genetics and Proceedings of the NAS reporting the first G protein subunit knockout mouse, which—in addition to expected deficits in defined signal transduction pathways—unexpectedly developed ulcerative colitis and adenocarcinoma of the colon.

In 1993 Dr. Rudolph moved to the University of Zurich in Switzerland, where he used the tools of modern mouse genetics in his studies of neuropharmacology. After completing his habilitation credential (which typically requires at least 15 original publications and substantial teaching experience) there in 1999, he continued on the faculty.

In particular, his group studied gamma-Aminobutyric acid (GABA), the chief inhibitory neurotransmitter in the mammalian central nervous system. They developed knock-in mouse models in which the effects of the benzodiazepines (such as diazepam [Valium]) are abolished in specific subtypes of GABAA receptors. This work helped identify the GABAA receptor subtypes that regulate anxiety, vigilance, and memory, and also the GABAA receptor required to achieve surgical tolerance with some clinically used general anesthetics.

We are now living in a time where novel technologies that revolutionize scientific inquiry are developed at an ever-increasing pace. To stay competitive, it is necessary to utilize the latest technologies.

“Ever since benzodiazepines were introduced into clinical practice almost 60 years ago, pharmaceutical companies have tried to develop drugs that would have anti-anxiety effects without sedative effects. This endeavor failed, because the precise structures mediating these pharmacological actions were not known,” said Dr. Rudolph. “Our research identified the distinct GABAA receptor subtypes that mediate these two different effects, which provided a blueprint for the development of drugs that control anxiety without sedation.”

Seminal articles reporting this research were published in Nature and Science and covered by news outlets including the New York Times.

Recent collaborative research in Zurich also discovered that non-sedating anti-anxiety compounds designed according to this recipe—via GABAA receptors in the spinal cord—also suppress pain and, as described above, itch.

In 2005 he moved from the University of Zurich to positions at Harvard and McLean. In addition to continuing his work on GABAA receptors, he also generated mouse models for psychiatric disorders. In one example, mice were engineered to mimic a small additional chromosome found in a family affected by schizophrenia and bipolar disorder that was cared for at McLean Hospital. The additional copies of genes in this extra chromosome proved to be sufficient to elicit phenotypes that are consistent with these neuropsychiatric disorders.

His recent work enhanced our understanding of how GABAA receptors modulate the susceptibility to chronic stress, which may provide the basis for the development of fast-acting antidepressants. In a recent review in Trends in Pharmacological Sciences he attempts to merge our understanding of molecular drug targets and our knowledge of the function of brain circuits, proposing the concept of “circuit pharmacology” to emphasize the importance of studying the function of drug targets with cellular resolution.

At Illinois, Dr. Rudolph will continue to study the effects of GABAA receptor subtypes in specific populations of neurons in the brain.

“We may develop novel tools that enable us to understand these effects in greater detail than ever before. Such research might lead to novel insights into mechanisms of drug abuse and regulation of a variety of cognitive functions.”

As a physician turned scientist, Dr. Rudolph believes the creation of the Carle Illinois College of Medicine may hold potential for “transform[ing] the way medicine is practiced.” He recalls serving at an institution where the medical school and engineering school were literally across the street from each other, but interactions between the two were relatively limited, “presumably because the incentive structure for collaboration was unfavorable.”

“Early in my career I was taught that, for most scientists, the best way to succeed is to focus on scientific questions and not so much on technology,” he said. “We are now living in a time where novel technologies that revolutionize scientific inquiry are developed at an ever-increasing pace. To stay competitive, it is necessary to utilize the latest technologies.”