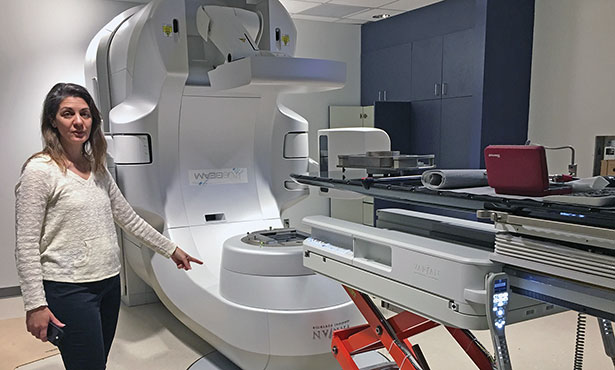 For decades, the Illinois oncology program has been recognized for the breadth and depth of its leadership in cutting-edge research, compassionate clinical service, and clinical and communication training for veterinary students. This month our program gains another point of distinction by adding a Varian TrueBeam® linear accelerator.

Illinois is the second U.S. veterinary college with this top-of-the-line linear accelerator in veterinary medicine. In addition, our machine is equipped with certain capabilities not currently available at any other veterinary teaching hospital.

Cobalt delivers radiation by releasing the radioactivity (photons that are present in a small source) toward the patient in a shape that is set for the machine based on the size of the tumor. Linear accelerators, on the other hand, generate radiation on demand. Electrons are formed and accelerated, producing photons when they strike a target. If we wish to deliver radiation using electrons, the target can be moved out of the way and replaced with a foil that scatters the electrons.

Either photons or electrons can be used for treatment. The choice depends on the depth of the tumor and the proximity to critical structures, such as the central nervous system, the eyes, or certain organs. In addition, we have the ability to change the energy of the photons or electrons that are created. Higher energy beams penetrate more deeply, so treatment can be further tailored to each patient.

‘Exact Shape of the Tumor’

As with cobalt, the resulting beam of energy can be shaped into a rectangle as it exits the machine (similar to collimating a diagnostic radiograph). In contrast to a cobalt machine, the beam can be further shaped using a multi-leaf collimator (MLC) or custom block to fit the exact shape of the tumor, based on coordinates supplied by a computer-generated treatment plan. 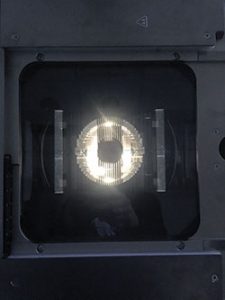 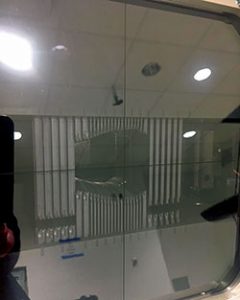 Two views of the multi-leaf collimator in the TrueBeam.

MLCs consist of a series of side-by-side sliding panels with the narrow edge oriented toward the patient. These leaves are tall enough to block the high energy radiation that exits the machine, allowing photons to reach the patient only in the shape that is created when they slide out of the way.

Electron beams can also be shaped, but not with an MLC; a plate-like block for the desired shape is created based on a computer-generated, to-scale pattern and a metal alloy is poured into the space outside of the shape to block unnecessary electrons.

The process of designing a radiation treatment plan has also become much more sophisticated with recent technology. The process of choosing the angles from which radiation is delivered, the energy of the beam, and the manner in which the beam is shaped is the same for human and veterinary patients.

Previously, plans were developed by visually inspecting radiographs and the patient to develop a 3-dimensional concept of the depth, shape, and orientation of the tumor inside of the patient. Radiographs were used to ensure that the patient was properly positioned. With the advent of computed tomography (CT), 3-dimensional imaging rather than planar radiography became the standard for planning and patient positioning.

Our new treatment planning system, Eclipse, allows us to import a CT scan to a computer program. We then use tools to label structures for the computer, and design beam angles that avoid important anatomic structures. By dividing the dose into multiple beams from different angles, all of which converge upon the tumor, we are able to minimize dose to normal tissue and maximize dose to the tumor. The result is improved efficacy and decreased toxicity compared to earlier methods of radiation.

In addition, the TrueBeam® is equipped with a cone-beam CT, which allows us to perform a CT scan with the patient on the treatment table to verify that the animal is in the same position as it was during the diagnostic CT that was used for planning.

Capabilities that will be used immediately include intensity-modulated radiation therapy (IMRT) and volumetric modulated arc therapy (VMAT, also called RapidArc). With both of these methods, each beam uses the MLC to modulate how much radiation is delivered to each part of the treatment field (like pixels on a screen). In this way, we can allow each beam to contribute variable doses of radiation to further optimize the radiation plan.

When Do We Use Radiation Therapy in Animals?

Radiation therapy has many indications. Most often, we use radiation to accomplish local control when this is not possible using surgery alone, and the risk of death due to metastatic disease is low. Examples include locally invasive tumors for which it can be difficult to achieve complete histologic margins with surgery alone, such as soft tissue sarcoma and mast cell tumor. Additionally, we commonly treat tumors that cannot be removed with surgery because of their location, such as brain or nasal tumors, apocrine gland anal sac adenocarcinoma (especially when it has grown outside the sac or has begun to spread to regional lymph nodes), and invasive thyroid tumors. 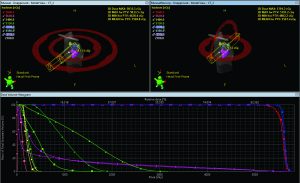 A three-dimensional image of the head of a dog with a brain tumor. The circles represent the path of an arc of radiation focused on the spot inside the head where the tumor has been discovered.

Abbreviated courses of radiation are sometimes used to palliate clinical signs and also minimize cost and time away from home. Examples include decreasing pain due to an osteosarcoma (bone tumor), decreasing congestion and epistaxis from a nasal tumor, decreasing discomfort due to enlarged lymph nodes when lymphoma is refractory to chemotherapy, or improving urine flow when carcinoma affects the urethra or prostate.

Side effects due to radiation can be divided into early and late effects. The early/ acute effects are seen in rapidly dividing tissues that are in the radiation field. For example, when irradiating a nasal tumor, there will be some hair loss, redness, and desquamation of the overlying skin, as well as mucositis. These adverse events occur toward the end of treatment (most fractionated protocols are administered over 3 to 4 weeks, with small doses given once daily, Monday through Friday), and can worsen after the treatment is complete.

After peaking, these signs will heal over a 2- to 4-week period, during which symptomatic treatment for pain, inflammation, itching, and occasionally superficial infection is administered. The most important part of this supportive care is to prevent self trauma with the use of e-collars or similar measures. Specialized bandaging material can be used if needed, but we prefer to allow the area to be open to the air. The more highly conformal treatment techniques that we will be able to employ with our new machine will minimize these side effects.

Late effects typically occur 1 or more years later (occasionally as soon as 6 months after treatment is complete), and manifest in slowly dividing tissues such as nerves (demyelination or degeneration), bone (osteonecrosis), or the lens of the eye (cataracts). These are rare because we design our protocols to minimize this risk. However, late effects are permanent when they occur, and hair often regrows white or grey.

Animals considered candidates for radiation will be evaluated through oncology, as ours is an integrated medical and radiation oncology service.

We are very excited to offer this cutting-edge technology to our four-legged patients!