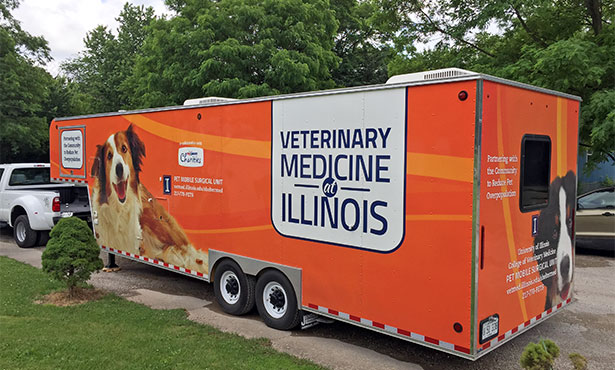 By far the most common surgeries performed on dogs in the United States are spay and neuter procedures—collectively called gonadectomies—that remove the reproductive organs to prevent unwanted pregnancies and pet overpopulation. 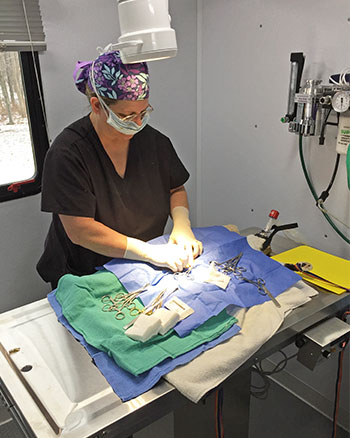 Dr. Teri Kidd was the first person to perform a spay and neuter procedure in the University of Illinois shelter medicine mobile surgical unit, acquired with funding from PetSmart Charities.

But while these surgeries are common, they are not without controversy. Misconceptions and concerns about these procedures abound. A big reason for the confusion is the overwhelming number of studies that have been done on gonadectomies. Intuitively, you might think that so much research on a subject would provide ultimate clarification, but instead the ocean of data has caused a lot of uncertainty.

Dr. G. Robert Weedon directs the shelter medicine program at the University of Illinois College of Veterinary Medicine in Urbana, which performs more than 4,000 low-cost spay and neuter surgeries each year at rural shelters in east central Illinois. He says that many research studies have been misinterpreted or over-interpreted, causing confusion among both veterinarians and owners.

That is why Dr. Weedon and three fellow shelter medicine researchers from the University of Minnesota, the American Society for the Prevention of Cruelty to Animals, and Mississippi State University recently published a review article* evaluating the relevant literature and drawing conclusions about gonadectomies, especially regarding the optimal age to perform this procedure.

Here is a sampling of the findings covered in Dr. Weedon’s article. Take care to note the incidence of each disease.

This list, which represents is only a fraction of the data Dr. Weedon and his coauthors address in their review, helps illuminate the complexity of the science regarding sterilizing pets. The ideal age for a spay or neuter is not clear cut; veterinarians have to consider many factors when recommending timing for the procedure.

Timing of Spay and Neuter May Impact Health

For example, waiting until a later age to spay or neuter a pet may increase the dog’s risk of certain types of cancer. Choosing not to spay or neuter a dog leaves the animal at a relatively high risk of pyometra in female dogs and benign prostatic hypertrophy/hyperplasia in male dogs.

On the other hand, currently published data suggests that in some breeds, spayed and neutered pets have an increased risk of other types of cancer, as well as of obesity.

Your veterinarian is responsible for evaluating the relative risks and communicating those risks accurately to you. For example, you may hear of a study that indicates that that spaying your female dog increases her likelihood of acquiring bladder stones; your veterinarian should discuss this risk with you, and let you know that bladder stones are reported in only one in 100 dogs.

And the connection between the gonadectomy and the disease may be coincidental rather than causal. In the case of bladder stones, Dr. Weedon emphasizes, “no clear cause-and-effect has been established between spays and an increased risk of bladder stones.” Some veterinarians speculate that the increased rate may be due to the fact that owners who have had their dogs spayed are more observant and more willing to seek veterinary care and treatment for bladder stones.

Dr. Weedon recommends spaying or neutering pets in almost every scenario, although the ideal age can change depending on the breed and health of your dog, as well as the circumstances in which the dog lives. Your veterinarian has the knowledge to help interpret the large amount of contradictory data, and the training to make the best recommendation for the age at which to sterilize your pet.

To learn more about the risks and benefits of spay and neuter surgeries for your dog, contact your local veterinarian.