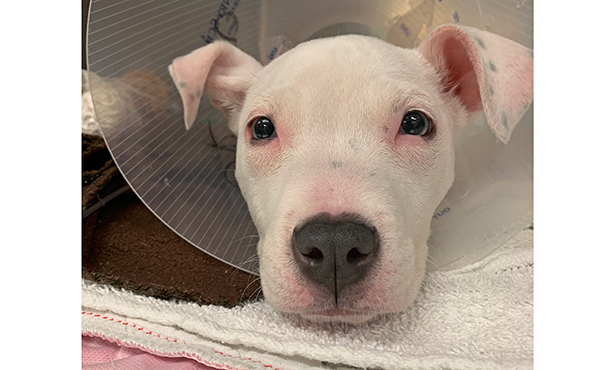 Hannah Bailey was sick. The six-month-old mixed-breed puppy couldn’t keep food down. She had lost weight. Her local veterinarian diagnosed an enlarged esophagus and suggested that her new owners take her to the University of Illinois Veterinary Teaching Hospital in Urbana.

Luckily for Hannah Bailey, a specialist there was able to treat the underlying cause of her problems—a congenital disorder known as a persistent right aortic arch (PRAA)—via a minimally invasive procedure. Soon after the procedure, the puppy was alert and eating. Patients treated with the traditional, and more invasive, surgical repair for PRAA spend more time in post-surgical recovery.

This case marks the first time a minimally invasive PRAA repair was performed at the Urbana teaching hospital.

The Case of the Regurgitating Puppy 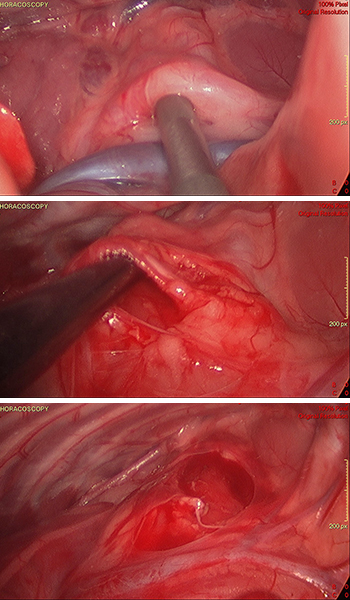 “After the puppy’s local veterinarians determined that the weight loss and inability to keep food down were related to her esophagus, they performed a barium swallow study,” says Dr. Scott. Barium, which shows up on X-rays, was fed to the puppy so that the veterinarian could get a picture of her esophagus, the tube that actively moves food from the mouth to the stomach.

The barium study revealed a dilated esophagus in front of her heart, which is frequently caused by a congenital disorder known as persistent right aortic arch (PRAA).

“Before puppies are born, their blood is oxygenated by their mother, not by their lungs. Special blood vessels are in place around the heart that allow the blood to bypass the lungs,” Dr. Scott explains. “Once puppies start breathing, these blood vessels normally regress.” Other blood vessels of the heart may fail to regress, and PRAA is the most common such problem.

PRAA occurs when the aortic arch is formed on the right instead of the left. The vessel (ductus arteriosus) that directs blood flow away from the fetal lungs remains on the left and loops around the esophagus and trachea. As this vessel regresses, it become a fibrous band that compresses the esophagus. Food cannot pass through the constricted esophagus to the stomach, so the esophagus gets stretched out and can’t perform its job of moving food. Puppies are unable to keep down their food and unable to gain weight.

Sometimes PRAA goes unnoticed until the dog begins to eat solid foods. While the puppy is nursing, milk may be able to pass through the constriction and reach the stomach.

“This disorder is most commonly seen in German shepherds and Irish setters but has also been reported in cats, horses, and cattle,” Dr. Scott says.

“Our first step was to perform additional imaging studies to rule out the presence of other congenital abnormalities of the blood vessels and to help us plan the surgery,” Dr. Scott explains. “Hannah Bailey did not show any other abnormalities, so we were able to offer our treatment options to the owners.”

A non-surgical treatment option for PRAA involves changing what and how the pet eats. Pets with PRAA can no longer eat dry food or be allowed to get any food scraps, which will just be brought back up. Instead, they will have to eat gruel-type food and be elevated for at least 15 minutes after feeding. Gruel is watery food that can be more easily moved into the stomach through the constricted esophagus. A special type of chair for animals with an enlarged esophagus holds them in an upright position while gravity assists in transporting the food. 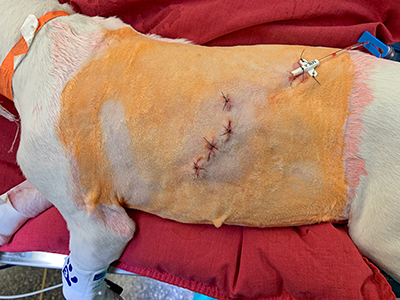 Four 1 cm incisions were made at the back and bottom of Hannah Bailey’s chest to allow room for the surgical instruments to reach the fibrous band. The chest tube at top, placed to drain any air or fluid post-operatively, was removed the morning after the procedure. Her skin has a temporary orange discoloration from the aseptic solution of iodine used in preparation for the surgery.

A thoracotomy is a surgical option for correcting PRAA. This option requires a large incision and a lengthy recovery period, typically including time in the intensive care unit.

“A conventional thoracotomy is quite invasive as it requires making an incision into the chest to be able to see the fibrous band causing the constriction and to dissect it,” Dr. Scott says.

Because Dr. Scott has special expertise, Hannah Bailey’s owners were able to choose a third option: a minimally invasive thoracoscopy.

This minimally invasive procedure uses small incisions in the chest to insert a camera and instruments. The camera allows the surgeon to see the defect, and the instruments are used to break it down.

Because the incisions are small, the animal is less painful after the surgery and usually goes home the next day.

“Hannah Bailey was bright, alert, and eating the night after her surgery,” Dr. Scott says, adding that the puppy is making a full recovery. “At her four-week recheck, she was doing great. She will soon be eating regular food after initially eating gruel in an upright position.”

“Minimally invasive techniques can be used to treat many conditions,” Dr. Scott says. “It just takes the knowledge and confidence to use it.

“I trained under a mentor who performed a lot of these surgeries. Now I plan offer these procedures and to teach the team here at U of I.”

If you have questions about minimally invasive procedures, contact your local veterinarian.