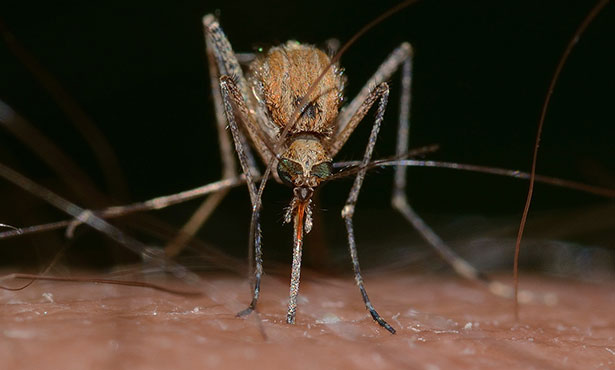 Mosquito season is here. Not only are the bites inflicted by these flying pests itchy and annoying, they also carry the risk of disease for humans and animals alike. Veterinarians actively monitor, treat, and seek solutions for diseases that affect human and animal health.

Heartworm disease is a well-publicized and potentially deadly disease transmitted by mosquitoes to dogs (and cats), which is why pet owners are strongly advised to administer monthly preventive medications. Zika, a mosquito-borne human disease linked to birth defects, grabbed headlines in the past few years when it first entered the United States.

West Nile virus similarly made a big, unwelcome splash when it arrived in New York City in 1999. The virus proceeded to make its way to the opposite coast, carried along by unsuspecting birds. Now every year around this time, West Nile virus pops up in the news as the first positive cases are reported.

West Nile virus, a flavivirus in the same family as the Zika virus, is spread by mosquitoes, mainly the Culex species. Mosquitoes become infected when they take a blood meal (i.e., bite) an infected bird. Some birds can develop high levels of the virus in their bloodstream, and these are called natural or “amplifier hosts.”

Only around one in five people infected with West Nile virus will develop symptoms, which are usually mild and flu-like. About one in 150 infected people will develop a serious, sometimes fatal, form of the disease, such as meningitis or encephalitis.

Horses make up the large majority of non-human mammalian cases of reported West Nile virus disease. Clinical signs in horses range in severity, just as in human cases. In horses, clinical signs of neurological disease can include ataxia (loss of control over movements), twitching, confusion or disordered mental activity, and paralysis.

As with most viral diseases, there is no specific treatment for West Nile virus, although infected horses may be given anti-inflammatory medication and supportive care. Severely ill horses that do not succumb to the virus may end up with permanent impairments in behavior or gait.

Fortunately, as with heartworm disease in pets, preventive measures are available for horses. The American Association of Equine Practitioners recommends annual vaccination of all horses, starting in the spring before the onset of mosquito season. More frequent vaccination may be warranted in high-risk areas or in individual horses with lower immunity.

The Wildlife Medical Clinic at the University of Illinois College of Veterinary Medicine sees a fair number of birds with suspected or confirmed West Nile virus in the late summer and fall. Typically, the natural host of a pathogen (birds, in the case of West Nile virus) is not significantly affected by the pathogen. However, some birds, especially hawks and other raptors as well as crows, ravens, and jays, seem to be particularly susceptible to this virus.

These patients usually exhibit neurological signs such as ataxia or seizures. Post-mortem findings usually reveal widespread inflammation, not only in the central nervous system but throughout the liver, heart, spleen, and even eye tissues.

Some birds respond well to supportive care and non-steroidal anti-inflammatory drug (NSAID) treatment, but most of the severely affected individuals do not recover. The equine West Nile virus vaccines are often used in avian species kept outdoors in zoological, rehabilitation, and falconry settings, though it has not been proven whether this approach is effective.

Preventing mosquito contact in the first place is the best way to avoid West Nile virus. Preventive steps include staying indoors when mosquito numbers are at the highest (usually between dusk and dawn), wearing clothing that covers all areas of skin, applying insect repellent when outdoors, and eliminating areas of standing water to decrease breeding and larvae production. Some communities take preventive measures through biological and chemical mosquito control programs to address the mosquito population over a large area.

For more information of West Nile virus, contact your physician or equine veterinarian or visit the Centers for Disease Control and prevention website at https://www.cdc.gov/westnile/.