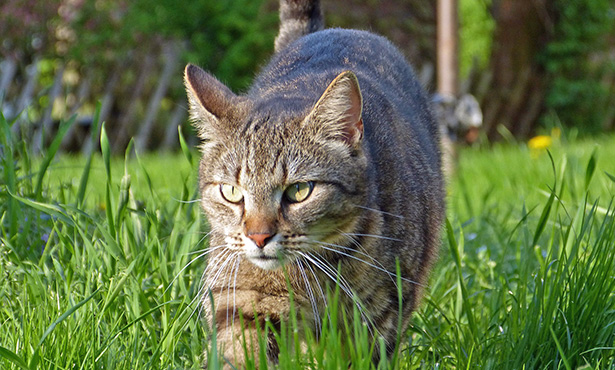 In U.S., More Cats Than Dogs Test Positive for Rabies

September 28 is World Rabies Day, a day to raise awareness about rabies virus and promote prevention and control efforts worldwide. But how much do you really know about the disease?

In TV shows and movies, rabies is typically depicted as a frothing-mouth wild animal disease. However, rabies can present itself in many ways and can affect any domestic warm-blooded animal. Dr. Gary Brummet, a small animal primary care veterinarian at the University of Illinois Veterinary Teaching Hospital in Urbana, says that the best way to prevent rabies is to vaccinate pets regularly.

Rabies is a disease that is caused by a virus found throughout the world. It is fatal to mammals, including dogs, cats, and humans.

“Rabies is transmitted through a bite or direct contact with the virus,” Dr. Brummet explains. Any other means of transmission is rare. The rabies virus itself is found in the saliva of an infected animal. The virus travels from the location of the bite to the brain via the nerves. After it reaches the brain, the virus will travel to the salivary glands, where it can then be transmitted to others.

“The speed at which an animal becomes infected with rabies after a bite can vary greatly,” Dr. Brummet says. “The closer the bite is to the head, the faster the illness will show clinically.” This process can take anywhere from two weeks to six months.

In North America, the skunk, fox, raccoon, coyote, and bat are important sources of infection. However, rabies is not only in wildlife, but also in domestic species, including cats and dogs. In 2017, 62 dogs and 276 cats tested positive for rabies in the United States, according to data published in the Journal of the American Veterinary Medical Association.

“In Illinois and the United States, bats are the number one species that transmit rabies,” Dr. Brummet explains. Bat bites are incredibly small and hard to see. If any contact is made with a bat, it is important to safely contain that bat and visit a veterinarian and human physician as soon as possible. The bat will need to be sent in for rabies testing.

“There are two forms of symptoms that rabies can exhibit. The first is known as the dumb form, and the second is the furious form,” Dr. Brummet explains. The dumb form, which is more common in dogs, involves progressive paralysis of the limbs and face and causes difficulty swallowing. The furious form is the typical and more well-known form of rabies. Animals will become aggressive and excitable, making it more likely that they bite another and spread the virus.

“The most common symptom of rabies is abnormal behavior,” Dr. Brummet says. An example is a skunk wandering in the daytime, because skunks are normally not out in the daylight at all.

A classic sign of rabies is the appearance of foam or froth in the mouth; the virus causes excessive salivation, which allows it to be transmitted more easily.

Rabies is untreatable and fatal in animals. Therefore, it is necessary to prevent infection in people who have been bitten by means of a series of rabies vaccine and human rabies immune globulin injections: four injections over 14 days.

Whenever there is an animal bite and rabies is suspected, the animal will be kept in isolation and observed.

“State law says that if any veterinary official learns that an animal bit a human being, the bite must be reported. The animal must then be quarantined for 10 days,” Dr. Brummet says. During this time, a veterinarian will safely examine the animal for signs of rabies. If, after 10 days, there are no signs of rabies, the animal will be allowed to return to normal life with its family.

“If an animal is bitten by another animal that is suspected to have rabies, there are two paths the protocol can follow, depending on the vaccination status of the animal,” Dr. Brummet explains. If the animal has ever been vaccinated, then it is a 45-day quarantine and isolation that can be done at home. If the animal has never been vaccinated, then it is a 6-month quarantine. Animal control will make the decision regarding the best location for the animal to be during the quarantine.

Prevention Is the Best Medicine

“With the outcome of rabies infection being death, the best way to keep pets healthy is to routinely vaccinate them for rabies,” Dr. Brummet says. Vaccines have done a great job to reduce the number of rabies cases in the United States. Human rabies, also fatal, used to be very common before the vaccine was available. Now, there are only 1 to 3 rabies deaths among people in the U.S. each year.

Rabies vaccination has saved both animal and human lives.

“Animals should be kept on leash or in a fenced-in area when outside to avoid an unfortunate encounter with wildlife,” Dr. Brummet advises. He also notes that if you spot a wild animal acting abnormally, you should contact animal control right away.

If you have any questions about the rabies virus, contact your local veterinarian.

Image by Katzenspielzeug from Pixabay