Maggots have a reputation for being creepy crawlies that should stay far away from our homes and our families. But these tiny fly larvae have been used in medicine for centuries for a unique purpose. Their role is so beneficial that, despite all our advanced technology and scientific discoveries, they are still used today.

Recently, a horse came to the University of Illinois Veterinary Teaching Hospital with a severe skin wound on his leg. The wound extended down the bottom half of his back left leg and did not appear to be healing very successfully. In fact, the wound had been getting bigger despite appropriate treatment at home. The doctors in charge of the case decided it was a good opportunity to use maggots.

Dr. Annette McCoy, an equine surgeon, says that maggot therapy is often used to debride—or clean out—wounds. “The maggots feed only on dead and dying tissue,” she explains. “They have no interest in the healthy flesh, so when all the dead tissue has been removed, they stop eating.” 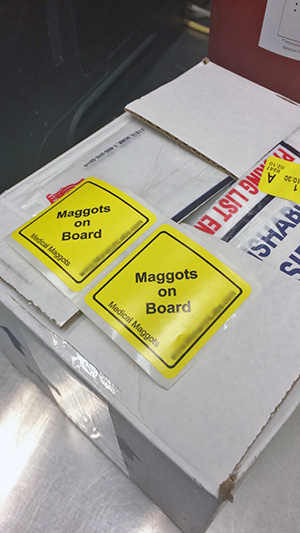 Maggots not only consume the dead tissue, but they also eat bacteria that might be growing in the wound, which further helps healing.

Medical-grade maggots are germ-free and come from an FDA-approved company that produces sterile maggots. This means that the maggots don’t continue on with their life cycle and turn into flies, like maggots in the environment.

“It’s based on the veterinarian’s comfort level with these bugs,” Dr. McCoy says. “Some have no problem handling maggots, while others would rather try other treatments first.”

Maggot therapy is not only used on horses, but on small animals as well, with the same general purpose of debriding a wound. Maggot therapy is also used in human medicine, mostly for ulcers and non-healing traumatic or post-surgical wounds.

The medical maggots are not as big in size as one might expect. “They come in a small jar and are only a few millimeters long,” Dr. McCoy says. They are placed on the wound, contained by a bandage, and allowed to eat for a few days.

“When they are removed, they will be significantly larger, which makes sense because they were just allowed to feast for two or three days straight.”

The animal typically does not feel any pain from the maggots because their activity is limited to damaged tissue, although some irritation might arise from the surrounding healthy tissue due to the movement under the bandage.

After three days, the wound Dr. McCoy had treated with maggots was rechecked, and it appeared much healthier. The dead tissue was gone, and there was less discharge and inflammation, giving the wound a better chance at healing.

“Maggots definitely aren’t for everyone, but you can’t deny that they have a pretty awesome skill,” Dr. McCoy says.

To learn more about maggot therapy or other wound treatments, talk to your local veterinarian. 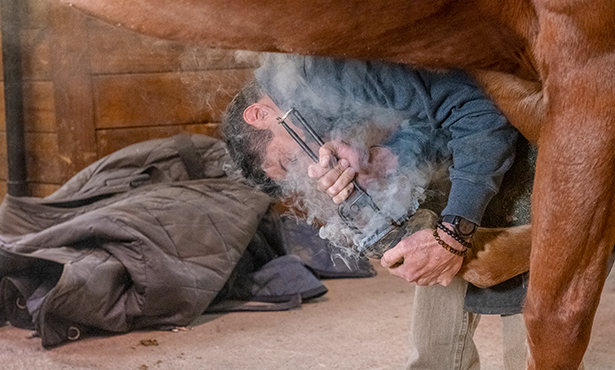