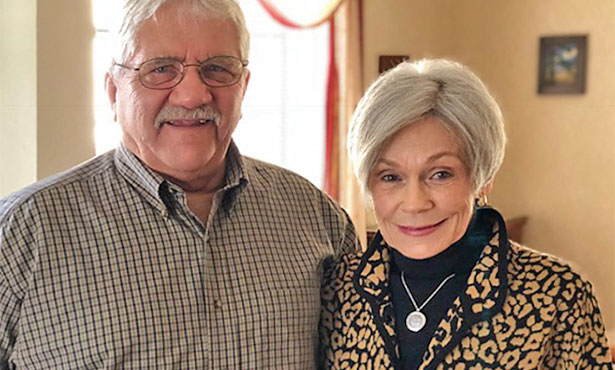 It’s fair to say Judy and Ed Polzin were not accustomed to cats.

Judy admits. “When we got our first cat, I didn’t have the slightest idea what to do.

“I called my husband at work and said, ‘There was this stray cat outside. I brought him in and put him on the porch. Is that all right?’ He said, ‘Yes, but you have to go get a litter box.’”

“I had no idea what a litter box was.” The Fred and Geraldine Steffen Memorial Scholarship, established in 2007, honors the late parents of Judy Polzin.

It’s also fair to say that four cats, one dog, and a canary later, the Polzins’ knowledge of and passion for animals has deepened dramatically over their 50-plus years of marriage. So much so that in 2007, the couple established the Fred and Geraldine Steffen Memorial Scholarship at the University of Illinois College of Veterinary Medicine in honor of Judy’s late parents.

The Polzins have no direct connections to the College, nor the field of veterinary medicine, and neither did the Steffens. Judy’s father was a steelworker, her mother a homemaker. However, when the Polzins began considering a way to pay tribute to her parents, it all made sense.

“The reason is because they were good, generous people,” Judy explains. “They were kind. We have no children, and I just wanted something so that their names would be remembered after we’re gone. I put that together with our love for animals and the obvious solution was to create a scholarship for veterinary students.”

The Steffen Memorial Scholarship goes annually to “a student who has completed the second year in the curriculum and who is interested in small animal, zoology or wildlife medicine, with demonstrated financial need and compassion for  all animals.” “That’s what we wanted,” Judy says, “to have the focus on small animals.” 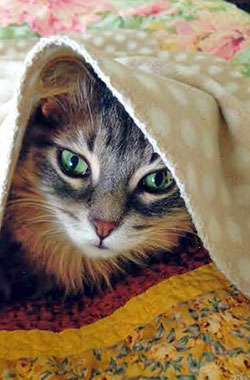 The Polzin’s created a quiet room within the Veterinary Teaching Hospital in honor of their cat Molly.

Their focus was exemplified by their last pet,  Molly, a domestic longhair cat whose 2015 passing inspired the Polzins to also make a generous gift creating Molly’s Place inside the Veterinary Teaching Hospital. Dedicated in March 2017, Molly’s Place is a quiet room where pet owners can go for privacy, peace or mourning over a beloved four-legged member of the family.

“A year or so before Molly died, we would bring her to our vet every Thursday for fluids,” Judy  recalls. “She was going into kidney failure and had leukemia as well. Every once in a while, someone would come in early in the morning with a pet that had to be euthanized. They would go into a certain room and you knew what was about to happen.

“A few minutes later, the people would come out and they would be in tears, but they had to walk past all of us in the waiting area. We just thought that seemed kind of cold. It was too bad there wasn’t a place that they could go to compose themselves after that ordeal, even a place to spend time with their pet beforehand. So when Molly eventually did pass away, we wanted to do something in her memory. I asked the College if they had such a place. That’s when we started talking about it.”

When the Polzins visit Molly’s Place now, their emotions are understandably mixed. “I do think it’s something that’s necessary, but it’s kind of a Catch-22,” says Judy. “It’s a place I don’t want to see used, but on the other hand it’s for something that is inevitable. So I’m glad it’s there.”

Both retirees, Ed and Judy have come to the College to meet every Steffen scholarship recipient in person except one, who was unable to attend the annual event. This year, Judy will deliver a speech at the affair.

“Gosh, yes,” she says, with a tremulous laugh. “I just hope I can get through it. When I’m working on it, it just brings back so many memories that it makes me cry. But I’ll do my best.”