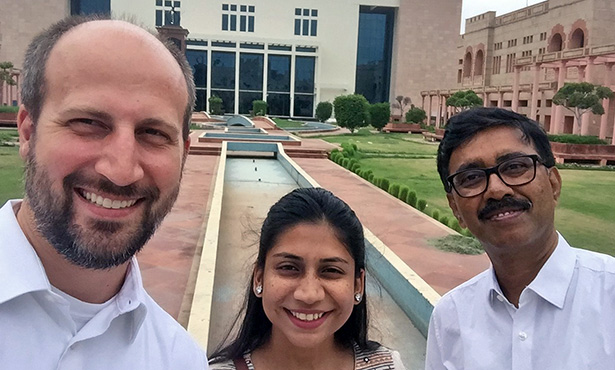 Two researchers from the College of Veterinary Medicine spent the latter half of July in southwest India, meeting with colleagues to develop a plan to learn more about Kyasanur forest disease, an emerging tick-borne health threat. 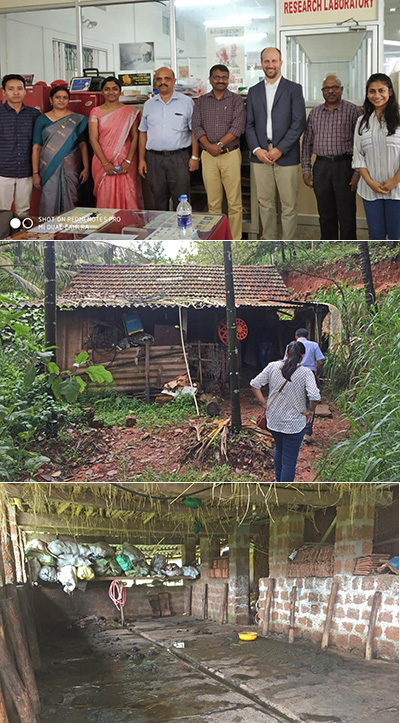 Dr. Will Sander, assistant professor of preventive medicine and public health and director of the DVM/MPH Joint Degree Program, traveled with Sulagna Chakraborty, a doctoral candidate in epidemiology in the Program in Ecology, Evolution, and Conservation Biology. (They are shown in the photo above with a collaborator from India in front of the National Agricultural Science Complex in Dehli.)

They solidified collaborations with three veterinary colleges and the Ministry of Agriculture’s Veterinary Research Institute in India. The One Health project to better understand the epidemiology of the ticks that spread Kyasanur forest disease also involves input from the U.S. Centers for Disease Control and Prevention and the National Centre for Disease Control of India.

Kyasanur forest disease is from the flavivirus family, related to dengue, yellow fever, and West Nile virus. Kyasanur forest disease kills up to ten percent of people who become infected. The disease has been confined to India, but has expanded its range from one state to five states over the past decade, increasing the concern that certain factors are driving expansion of both the tick and the virus.

Over the two-week trip, Dr. Sander and Sulagna traveled to affected sites in southwest India in the states of Karnataka and Kerala and met with key contacts in Delhi.

The planned five-year project will use funding from the U.S. Department of Defense to improve capacity for field surveillance and laboratory diagnostics as well as better understand how the tick plays a critical role in the spread of this fatal virus.

Images at right, from top: Dr. Sander, third from right, and Chakraborty, far right, with collaborators from Kerala Veterinary College; below: two field sites from the Shimoga district, including an interior cattle holding area (bottom).