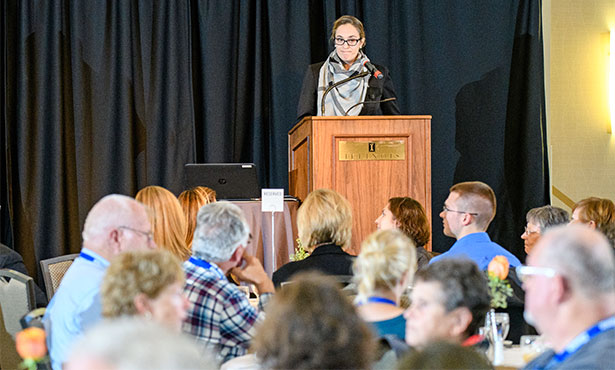 The University of Illinois College of Veterinary Medicine and its alumni association presented two awards on October 26 during the college’s annual Fall Conference for Veterinarians.

In introducing the honorees, Dr. Lynne White-Shim, president of the Veterinary Medical Alumni Association (pictured above), remarked that the individuals selected for the awards “represent the very best of our college and the veterinary profession.” 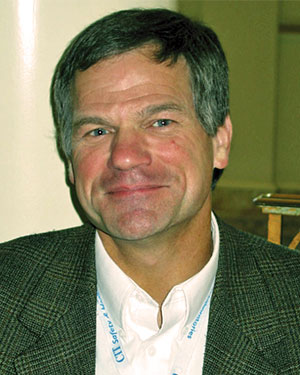 Dr. Daniel Morton, who earned a PhD from the college in 1990, posthumously received the Dr. Erwin Small Distinguished Alumni Award, which recognizes distinguished graduates of the college who have excelled in their respective fields and have made significant contributions to the profession and/or the college. This award was established in honor of the late Dr. Small, a 1957 Illinois veterinary graduate who devoted his life to advancing the veterinary profession through leadership on a national and international level and who served the college as professor emeritus and associate dean of alumni and public affairs.

After completing his PhD, Dr. Morton remained at the University of Illinois for three years, serving as clinical assistant professor and assistant director in the Office of Laboratory Animal Care. Over the next 10 years, Dr. Morton held positions of increasing responsibility at Baxter Healthcare Corporation, Abbott Laboratories, and Pharmacia Corporation. From 2003 until his untimely death in 2015, Dr. Morton served as a Research Fellow at Pfizer, Inc.

He was a diplomate of both the American College of Veterinary Pathologists and the American College of Laboratory Animal Medicine, and he made notable contributions to both organizations. For the Society of Toxicologic Pathology he held the offices of president, secretary-treasurer, and section editor for the journal Toxicologic Pathology, as well as serving on multiple committees.

Dr. Morton was honored in his lifetime with the American College of Veterinary Pathologists Presidential Award in 2008 and the Society of Toxicologic Pathology Lifetime Achievement Award in 2014.

In a memorial tribute to Dr. Morton published in the journal Toxicologic Pathology shortly after his death, the authors wrote:

“Dan was the epitome of the quiet leader: he led not through the force of his ego but by his thoughts and actions. He elevated the people around him, gave credit for successes rather than taking it, and accepted personal responsibility instead of directing blame at others. Dan helped to guide a generation of toxicologic pathologists, and his death leaves a void that will be felt by many.” 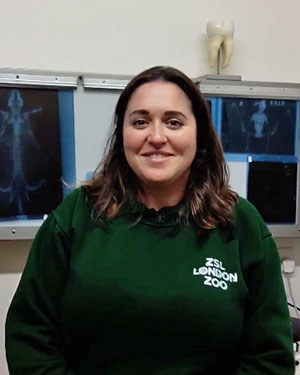 Dr. Amanda Guthrie, an Illinois DVM in 2006, received the Outstanding Young Alumni Award, which recognizes veterinary graduates who have excelled early in their specific field and who embody the Illini spirit of “labor and learning,” through creativity and entrepreneurship in the field of veterinary medicine.

Dr. Guthrie is currently a senior veterinary officer for the Zoological Society of London, which oversees two animal collections numbering more than 21,700 individual specimens. She was selected for the dedication, self-motivation, discipline, and passion she demonstrated in pursuing board certification in zoological medicine.

Despite outstanding qualifications, Dr. Guthrie did not match in the highly competitive zoo residency matching program upon graduation. Instead, she followed the rigorous non-residency path to qualify for the examination, which includes seven years’ work experience in zoological medicine and five first-author manuscripts, one of which must reflect original research.

After graduation, Dr. Guthrie worked in a variety of exotic animal settings in the United State while also contributing to the conservation of wild species, including the Kemp’s Ridley sea turtle, Asian elephants in Thailand, and sloth species in Costa Rica.

Because Dr. Guthrie was unable to attend the awards program, her classmate Dr. Sarah Vuolo was on hand to accept on behalf of Dr. Guthrie.