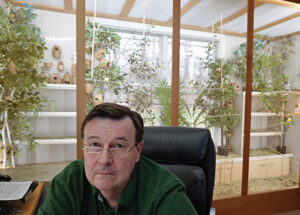 I was raised in the industrial, rainy northwest of England near Liverpool, and got my veterinary degree from Cambridge University in the somewhat snooty, sunny, and much-less-wet southeast.

My veterinary education was relatively slow paced (over 6 years) and very enjoyable after the very challenging first two years. I particularly enjoyed “seeing practice” in the vacation times, often in idyllic James Herriot-like practice settings. I was fascinated by the excellent state diagnostic support services available to food animal veterinarians at the time, support that did not exist on the small animal side.

Internal medicine as a specialty did not exist in the United Kingdom when I graduated, so it was an eye-opener when I landed a small animal rotating internship at the University of Pennsylvania in 1978. My first case was a pyometra in a dog with DIC! I learned a great deal very quickly, was fascinated by the (new to me) diagnostic support services for small animals.

I was offered residency training program in internal medicine, during which I saw two particularly instructive cases, both of which I published. The first was a cat with hyperviscosity syndrome in which there were many fascinating things to “measure.” The second was a dog with short bowel syndrome after massive intestinal resection, in which there were many things that would have been interesting to quantify, none of which were available.

Gastrointestinal disease in dogs and cats, especially exocrine pancreatic disease and enteric diseases associated with dysbiosis (or small intestinal bacterial overgrowth, as it was first recognized). Those were the subjects of my PhD at the University of Liverpool in the 1980s, and it is great to see the current explosion in our knowledge regarding dysbiosis.

I am particularly gratified to see the widespread recognition of exocrine pancreatic diseases in cats, which were considered to be so rare as to be essentially non-existent when I was in residency training. Now everyone knows that cats get pancreatitis and exocrine pancreatic insufficiency, and that cobalamin deficiency is common (and treatable) in cats with digestive diseases.

What is the current clinical trial you are conducting?

My colleague Dr. Patrick Barko and I are investigating the use of a novel multi-strain probiotic consisting of three strains of bacteria known to have positive effects on reducing inflammation and promoting healing of the small intestine, and should be useful in treating chronic enteropathies (IBD). Work-up subsidies worth up to around $2,000 are available, and all participants will receive the probiotic (which is not available elsewhere) free of charge for at least up to 6 months.

Tell us about one of your favorite cases.

Feline pancreatic disease cases can be immensely gratifying to diagnose and treat. Perhaps my favorite cases are those with exocrine pancreatic insufficiency and severe cobalamin deficiency. They are nowhere near as rare as people think, and their clinical signs are usually atypical (for example, many have poor appetites rather than the anticipated polyphagia) so the diagnosis is rarely suspected. However, they are so easily diagnosed with certainty by assay of serum fTLI and cobalamin for less than $200, and most can be managed very successfully. I love doing consults on those cases.