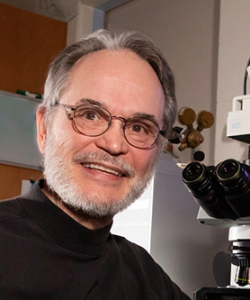 1995  Director of Center for Microscopic Imaging, University of Illinois

Testicular growth and development, estrogen regulation of the male reproductive tract, spermatogonial stem cell regulation and the effects of gene disruption on spermatogenesis and efferent ductule structure and function.

Dr. Hess studied Zoology and Science Education for an undergraduate degree at the University of Missouri-Columbia with High Honors in 1971. While working full-time in Poultry Research and later as a technician in Electron Microscopy, he completed a Master's degree in Physiology at the University of Missouri-Columbia in 1975. Then he moved to Washington University School of Medicine in St. Louis, where he worked as an Electron Microscopy Associate until 1978. At Mount Sinai Medical School in New York City he worked in Pulmonary Medicine, but was later selected to study for the PhD at Clemson University in Animal Physiology, studying Reproductive Biology from 1980-1983. He did 3 years Postdoctoral training in Reproductive and Endocrine Toxicology at the US Environmental Protection Agency, in Research Triangle Park, NC. In 1986 he began his long career as a Professor at the University of Illinois, Urbana-Champaign, were he also served as the University Director of Center for Microscopic Imaging from 1995-2003; Director and PI of the NIEHS Training Grant in Environmental Toxicology from 1998-2002. Currently, as Professor Emeritus he teaches Cell and Tissue Biology at the Medical School and is active in several research collaborations on the effects of gene disruption in spermatogenesis and efferent ductule structure and function.

Hess RA. (2014) Disruption of estrogen receptor signaling and similar pathways in the efferent ductules and initial segments of the epididymis. Spermatogenesis 4, e979103.

Invited International Lectures (selected from over 100, of which 55 were given in foreign countries):

Invited Lecture, "Small tubules, surprising discoveries: from efferent ductules in the turkey to the discovery that estrogen receptor alpha is essential for fertility in the male,” The V International Symposium on Animal Biology of Reproduction (ISABR 2014), Campinas, SP, Brazil, October 8-11, 2014. This meeting was dedicated to Dr. Rex Hess in tribute to his lifetime scientific contributions.

Invited Speaker, “Estrogen importance in the male: from a curiosity to absolute necessity,” Department of Endocrinology and Cell Biology, University Medical Center Utrecht, The Netherlands, September 29, 2003.

Invited Speaker, “Estrogen importance in the male: from a curiosity to absolute necessity,” Mini-symposium at the Institute of Biological Sciences, Federal University, Belo Horizonte, Brazil. April 11, 2003.

Invited speaker, The Boden Research Conference 2000 on "Estrogens and Male Health,” Sponsored by the Australian academy of Science, the Australian Society of Reproductive Biology and Endocrine Society of Australia, November 2-3, 2000, in Sydney, NSW, Australia.

Invited speaker at the United Nations University Symposium on Environment and Human Health, held at the University of Ulm, Federal Republic of Germany, March 4-8, 1990.

Memberships (current and past)

Society for the Study of Reproduction (present)

Editorial Boards (past and present service)

President of the Champaign Chapter of the International Lion's Club (2009)

LDAP Details for Hess, Rex A