History of the College

Throughout its proud history, the University of Illinois College of Veterinary Medicine has been grounded in science and inquiry into the workings of the body, committed to improving the health and welfare of animals and people, and united as a caring community.

Veterinary Education and Service before 1948 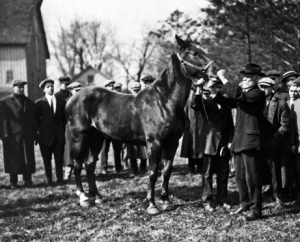 In the late 1800s weekly “horse clinics” were offered on the University of Illinois campus.

Veterinary service and education at the University of Illinois date to the early years of the university’s existence. A course in veterinary medicine and surgery was first offered in 1870, and weekly “horse clinics” became a staple of care for local owners in the late 1800s. In the early 20th century a busy veterinary diagnostic laboratory on the university campus met crucial needs in the state’s agricultural industries, along with livestock disease eradication programs led by university personnel.

Although a College of Veterinary Medicine was authorized by the state General Assembly in 1919, it was not until 1944, in response to growing demand from farmers and veterinarians, that the Board of Trustees formally established the college. The following year, in 1945, the Illinois legislature authorized funding to construct a basic science laboratory for the college, though the building was not completed until 1952.

Establishment of the College 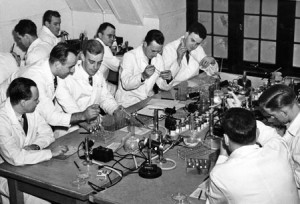 The first veterinary class at Illinois received instruction in a former sorority house on Pennsylvania Avenue in Urbana.

When the first class—twenty-four men, all of whom were World War II veterans—enrolled in 1948, lectures and labs took place in an old sorority house while kennels, large animal stalls, and surgeries were located together in a remodeled beef barn. When the basic science building on Peabody Drive opened in 1952, it included an annex for diagnostic and research activities. In 1952, when the first class graduated, the college’s first PhD degree was also awarded. The following year, Dr. Lyle Hanson, who later joined the faculty, became the first to earn a master’s degree from the college. By 1955, a Large Animal Clinic was completed on Maryland Avenue, while the Small Animal Clinic continued to operate from the old beef barn. Also in 1955, Dr. Dorothy Safanie became the first woman to earn a DVM from the college. 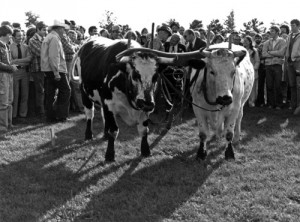 In recognition of the college’s origins in the state’s agricultural industry, an ox-drawn plow was used at the groundbreaking ceremony for the Basic Sciences Building.

By 1962 the growing college recognized the need for larger facilities. A year later the current 40-acre site at the southeast corner of the Urbana campus, bounded by Lincoln Avenue, Hazelwood Drive, and St. Mary’s Road, was identified for new construction and relocation of the college. In 1971 the Small Animal Clinic and Surgical-Obstetrical Laboratory (now known as the Clinical Skills Learning Center) opened. The Large Animal Clinic was completed in 1976. The college’s first endowed scholarship, the Anna M. Gulick Scholarship, was established in 1964.

State funding for the current Basic Sciences Building—as well as new facilities for the campus’s College of Agriculture—was provided through the Food For Century III initiative, aimed at strengthening the research and educational underpinnings of the food and agricultural industries. When the $24 million facility was dedicated in April 1983, it united the college’s facilities in one location for the first time.

Leadership in Veterinary Research and Teaching 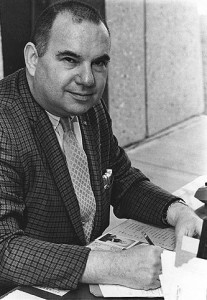 Dr. Erwin Small devoted more than 50 of his 85 years to serving the College of Veterinary Medicine and the veterinary profession worldwide. The professor emeritus and former associate dean for alumni and public affairs died in 2009.

Luminaries in veterinary research and education helped establish a strong reputation for the College of Veterinary Medicine in its early years. Dr. Lloyd Davis pioneered the field of veterinary pharmacology, and Dr. Norman Levine was internationally known for his research on Protozoa and other parasitic organisms that cause diseases, such as malaria and toxoplasmosis, in animals and humans. Dr. Erwin Small, who spent more than 50 years at the college, was a national leader for organized veterinary medicine and the advancement of the profession. Toward the end of the 20th century, Illinois broke ground in pedagogical research into the use of simulations and models to enhance mastery of veterinary clinical skills while conserving animal resources.

With its Center for Zoonosis Research, established in 1960, the college was an early advocate of interdisciplinary research collaborations aimed at improving human and animal health. Both infectious disease and environmental toxicology were prominent areas of research for the college in the second half of the 20th century. In 2004 an NIH grant for facilities renovation expanded and updated biomedical laboratory space in the basic sciences building. With the advent of genomic research and molecular biology, the concept of “one medicine” took on greater meaning: not only are the health and well-being of humans, animals, and the environment intimately linked, but at the most basic levels many biological functions are shared. The College of Veterinary Medicine emerged as strong proponent of translational biomedical research—discoveries at the genomic, molecular, and cellular levels that had applications for improving human and animal health. The college’s two basic sciences departments adopted new names during this period to reflect the fact that they engage in biomedical discovery that is not limited to veterinary applications. 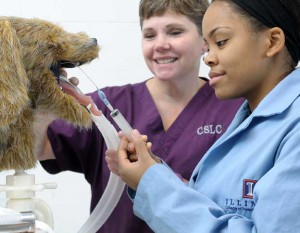 The Clinical Skills Learning Center, which opened in 2009, is one of the nation’s most comprehensive facilities and continues to expand each year.

In 2006 the college adopted a bold strategic plan that led to remarkable advancements over the following three years. By 2009, the faculty had conceived and implemented an innovative veterinary curriculum that integrated clinical competency throughout the four-year degree program; had built the nation’s most comprehensive clinical skills learning facility; had established a clinical presence in Chicago to support the teaching and outreach mission of the college; had launched the Center for One Health Illinois; and had successfully met and exceeded its fund-raising goal for the Brilliant Futures campaign, bringing in a total of $51 million.

With its three academic departments—Comparative Biosciences, Pathobiology, and Veterinary Clinical Medicine—and three service units—the Chicago Center for Veterinary Medicine, the Veterinary Diagnostic Laboratory, and the Veterinary Teaching Hospital—Illinois claims many strengths that provide a firm foundation for growth: historic ties to the agricultural industries in the state; location within a world-class university; international recognition for the newly introduced veterinary curriculum and the Clinical Skills Learning Center; research faculty with NIH-funded programs; veterinary specialists who are leaders in their fields; access to the state’s population center; a prominent and supportive alumni and donor base; and expertise that is highly relevant to a host of societal needs, from basic biology to public health, emerging infectious disease, food safety, food productivity, environmental toxicology, specialized medicine, and the human-animal bond.

In charting the college’s future course for addressing the needs of society and advancing veterinary science, the faculty draw on these assets and on their own proven track record of successful innovation.