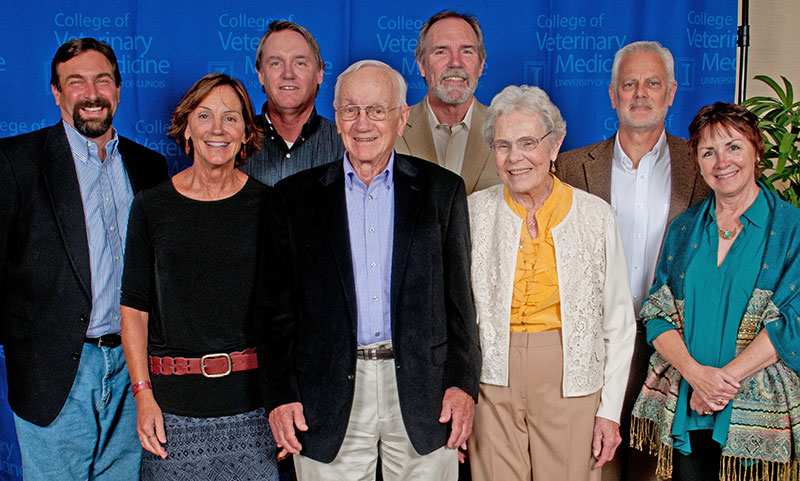 Above, Dr. Lloyd Helper with his wife, children, and sons-in-law in 2014 when he received the college’s Dr. Erwin Small Distinguished Alumni Award.

The College of Veterinary Medicine mourns the loss of Dr. Lloyd C. Helper, who served on our faculty for 38 years and remained engaged with the college long after his retirement in 1993. He died on Sunday, July 18, in Fort Collins, Colo. We remember him as a pioneer in the field of veterinary ophthalmology, a tireless advocate for students, and a devoted leader, friend, and family man.

Dr. Helper was hired as an instructor at the college upon his graduation from it in 1955. He spent the years from 1956 to 1958 on active duty in the U.S. Air Force Veterinary Corps, then returned to the college faculty while joining the Air Force Reserve, where he attained the rank of Lieutenant Colonel. In 1961, Dr. Helper earned a master’s degree in clinical medicine from the college.

In 1966, Dr. Helper began a long and productive association with Dr. William Magrane, who had a decade earlier founded the American Society of Veterinary Ophthalmology and whose private veterinary practice in Indiana is recognized as the first in the world devoted entirely to eye diseases and surgery. Dr. Magrane came to the college’s hospital two days a month to see ophthalmology cases, and Dr. Helper seized this opportunity to help develop a new specialty.

In 1969 Dr. Helper entered a yearlong post-doctoral fellowship in comparative ophthalmic pathology at Stanford University School of Medicine. In 1971, when the American College of Veterinary Ophthalmologists (ACVO) became the third clinical discipline to receive specialty status, both Dr. Magrane and Dr. Helper were among the charter members.

Contributions at the College

Dr. Helper founded the ophthalmology service at Illinois and served as its chief until 1982, when he assumed the role of associate dean of academic and student affairs. Two of his four children followed in his footsteps by earning an Illinois DVM, David in 1983 and Patricia in 1984.

Dr. Helper continued his contributions to his specialty even as he led the student affairs office. In 1985, he served as president of the ACVO and he remained active for decades in the International Society of Veterinary Ophthalmology, which recognized him as a Foundation Honorary Member in 2013. In 1989 he authored the fourth edition of Magrane’s Canine Ophthalmology. He also held leadership roles at the regional, state, and national levels of organized veterinary medicine.

After his retirement in 1993, Dr. Helper enjoyed traveling and spending time with family, but he continued active involvement in the college. He was a regular and beloved presence at the college’s annual Fall Conference for Veterinarians, often in his trademark western cowboy hat, and attended the Celebration of Awards and Scholarships in the spring.

In 2002, he and his wife established an award to recognize “a deserving student and faculty member who enhance a cooperative learning environment among students and a constructive mentoring/coaching relationship between faculty and students.” The Dr. and Mrs. Lloyd Helper Veterinary Student and Faculty Collegiality Awards stand as a lasting testament to his contributions to the College of Veterinary Medicine and his spirit of cooperation, dedication, and friendliness.

In 2014, the college honored Dr. Helper with the Dr. Erwin Small Distinguished Alumni Award, which recognizes distinguished Illinois graduates who have excelled in their field and made significant contributions to the veterinary profession or the College of Veterinary Medicine. The photo featured above was taken during that award ceremony, when Dr. Helper was surrounded by his loving family.

The family has requested that those wishing to recognize Dr. Helper consider a donation in his memory to the Dr. and Mrs. Lloyd Helper Veterinary Student and Faculty Collegiality Award Fund.

Tributes from Colleagues and Former Students

Dr. Lloyd Helper was indeed a champion for veterinary medicine, veterinary education, and veterinary ophthalmology. My first interactions with him were as a veterinary student, and while demanding much from us, he also would take the time needed when you did not understand a concept to help you and make sure you mastered it. Later I worked with him as a faculty colleague and appreciated his efforts and admired his leadership as Associate Dean. No doubt he will be missed by all.

Dr. Lloyd Helper had a profound impact on veterinary medicine through his efforts related to veterinary ophthalmology and veterinary education. He was a founding member of the American College of Veterinary Ophthalmology (ACVO) and held many leadership positions in the ACVO and veterinary medical associations. Dr. Helper is widely known as the author of the fourth edition of Magrane’s Canine Ophthalmology. He also had a long-held interest in veterinary education and served with great distinction as Associate Dean of Student Affairs in our college for 11 years until his retirement in 1993. Dr. Helper was always collegial and personable, and his surname accurately described his demeanor.

I feel fortunate to have known Dr. Helper. He was a charter member of the American College of Veterinary Ophthalmologists and his contributions to our specialty are immense. He was a champion of veterinary students and was passionate about their education. He was a gentleman and will be greatly missed by all who know him.

Dr. Helper was a remarkably friendly person who was devoted to and very proud of his wife, family, the American College of Veterinary Ophthalmologists, and the University of Illinois. His contributions to science and the evolution of veterinary education were vast. Ninety one years well spent!