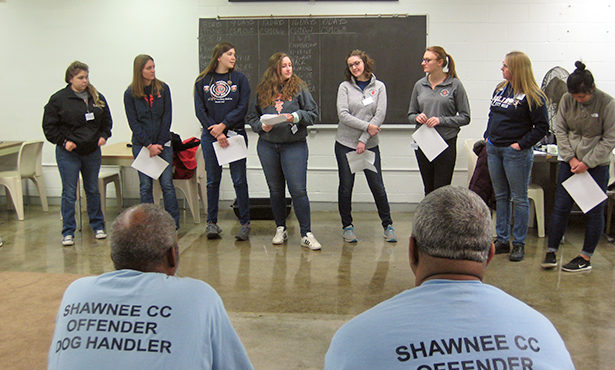 After our Human-Animal Bond Association club visited Shawnee Correctional Center in October to learn about the S.W.A.T.T. (Shawnee Wellness Assistance Therapy Training) program, we were eager to help in any way we could. The program coordinator, Angela Galbraith, invited us to come back in December when the next group of dogs arrived. We offered to teach the inmate handlers about basic canine health and care. Angela said such skills might help the inmates find jobs after their release.

The dogs come from Project Hope Humane Society in Metropolis, Ill. There they get a thorough veterinary exam, neuter/spay surgery, vaccinations, and heartworm and flea/tick preventive medication. The dogs enter the prison in good health, and are housed there for 12 weeks while the inmate handlers provide training and socialization, under the instruction of a professional trainer. Five new dogs arrived at the prison in December, and several new handlers joined the program as well.

On December 8 our group of nine veterinary students made the three-hour trip to Vienna, Ill. After we and all the supplies we brought along made it through security, Angela led us to a large classroom where the inmates and dogs were waiting.

We Meet the New Dogs and Handlers

On our first visit we had met with only about eight inmates, so it was a little intimidating to speak to around 25 inmate handlers and alternates, as well as several guards. But we gathered our composure when we saw the pups. All five dogs were there and were as adorable as can be! Their names are Cindy Lou Who, Mickey, Sachel, Curtis, and Darcy. (If you would like to peek at them, here is a link: https://www.projecthopehumanesociety.org/swatt )

Next, we demonstrated to the inmates how to do a basic physical exam. We handed out a general physical exam sheet and a list of normal vital signs for dogs. Our doggy volunteer allowed us to demonstrate how to observe a dog from nose to tail, looking for signs of illness or injury. Then we showed how to use the stethoscope to listen for a heart rate and how to take a respiratory rate. We explained to the inmates the importance of looking at oral mucous membrane color and how the CRT (capillary refill time) could give a good indication of adequate perfusion.

Lots of Information, Lots of Questions

In addition to vitals, we explained how to examine the different body systems. We discussed signs of illness that could be noticed in the dogs’ skin and coat, eyes, ears, nose, throat, oral cavity, cardiovascular, musculoskeletal, gastrointestinal, urogenital, and neurologic systems. Learn what is normal for your dog, we advised, so you will be able to recognize something abnormal when it appears. The inmates had a lot of questions about what various signs could mean.

In teaching about emergency conditions and their treatments, we covered lacerations, choking, and bloat/GDV. Then we proceeded to go through basic CPR procedures for a dog that is in cardiac arrest, explaining that this situation requires immediate veterinary attention but that CPR could be implemented on the way to the veterinarian to give the dog a chance at survival.

The Clinical Skills Learning Center at our college loaned us a life-sized dog model named Jerry for a better simulation and demonstration. The inmate handlers had many questions about the amount of pressure and the timing of the compressions. We told them that the beat of the compressions was done either to the song “Stayin’ Alive” or to “Another One Bites the Dust.” (We prefer “Stayin’ Alive” as we feel it is a much better song for the hoped-for outcome!)

Finally, we discussed basic dog grooming, including regular brushing, ear cleaning, nail trimming, and tooth brushing. The inmates had brushes for the dogs and had been brushing them already. That’s great because brushing not only helps keep their skin and coat healthy, but also promotes bonding with the dogs and gets them used to physical contact. It could also alert the handlers to  injuries or sores on the dog’s skin or body.

Donations from the College

Each of the dogs received a toothbrush and toothpaste, generously donated by the dentistry service at the Veterinary Teaching Hospital. Since these dogs had probably never had their teeth brushed, we advised the inmates to work up to it slowly. We explained ways to encourage and reward the dogs for even a little brushing, so that the dogs would begin to see toothbrushing as a positive experience they looked forward to.

We also brought some ear-cleaning wipes and demonstrated how to use these to clean the dogs’ ears. Because many dogs are leery of having their feet touched or held—and consequently really do not like to have their nails trimmed—we described a gradual process to create a positive experience around having their feet handled to help the dogs overcome their natural fear.

After the presentation, each group of handlers got the chance to practice the skills we had described. They listened for a heartbeat, using the two stethoscopes and timer we donated to the program. Then they examined mucous membranes and check CRT, as well as handled the dogs’ feet and examined their ears. They also practiced toothbrushing techniques and acclimating the dogs to having their teeth brushed.

A Small Step at a Time

Some of the inmates were a little nervous when trying these new procedures, not wanting to hurt the dogs. We were able to show them one-on-one how to attempt each new skill a small step at a time, then reward the dog with a treat. It was clear that the inmate handlers had already begun to earn the dogs’ trust in the several days they had been together. We are really looking forward to seeing how this will progress over the 12-week training program.

It was truly amazing to see how excited the inmates were to learn these new skills and gain new knowledge. Whenever we paused to ask if there were questions, so many inmates’ hands would go up. They were so engaged in learning. We even noticed one gentleman taking notes!

Our visit was a very positive experience for us, and we are eager to learn how well it met the information needs of the handlers.