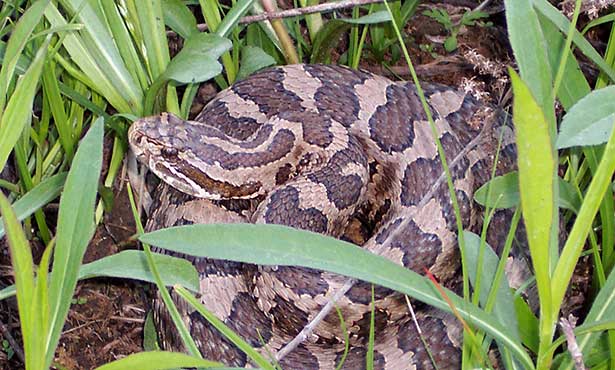 In the first study of its kind, researchers characterized the skin microbiome of a population of free-ranging snakes to begin to understand how the animals’ environmental microbial community may promote disease resistance as well as how it may be disrupted by infection.

The study, which was recently published in Scientific Reports, a Nature research journal, focused on eastern massasaugas in Illinois. This species of endangered rattlesnake is highly susceptible to the fungal pathogen Ophidiomyces ophiodiicola, which causes snake fungal disease (SFD). SFD results in disfiguring sores on snake skin, has a high mortality rate, and poses a significant threat to snake populations in North America and Europe. The mechanism by which the pathogen causes disease is unknown.

“Globally, fungal pathogens are increasingly associated with wildlife epidemics, such as white-nose syndrome in bats and chytridiomycosis in amphibians,” said Dr. Matt Allender, a faculty member at the University of Illinois College of Veterinary Medicine and an affiliate of the Illinois Natural History Survey (INHS), part of the university’s Prairie Research Institute. “Snake fungal disease has been identified in a number of snake species, but very little is known about contributing factors for infection.”

Dr. Allender, who heads the Wildlife Epidemiology Laboratory, has been investigating SFD for more than 8 years. In 2014 he introduced a quantitative polymerase chain reaction (qPCR) test to quickly identify the fungus from a swabbed sample.

“In a 20-year collaborative study led by INHS researchers, we have been the primary investigator of numerous studies documenting disease trends in the eastern massasauga including overall health, but none of these health parameters seemed to explain the emergence of SFD. This study was undertaken in light of recent promising findings about the importance of environmental microbial communities in animal and human health.”

Based on their analysis of 144 skin swabs collected from 44 snakes in 2015 and 52 snakes in 2016, all near Carlyle Lake, Ill., researchers determined that infection with SFD altered the bacterial and fungal diversity of the snakes studied. On the infected snakes, Ophidiomyces was present even at locations on the snakes’ bodies distant to the open sores, indicating that the skin’s entire microbiome is altered by the infection.

No Ophidiomyces spores were detected on SFD-negative snakes, as would have been expected had those snakes’ microbiome proven protective against the pathogen.

Findings related to the specific bacteria and fungi found in greater or lesser abundance depending on the disease status of the snake are detailed in the study.

“Disease-causing organisms function within the community of microbes that colonize the snakes and their environment. Success of the pathogen is governed by interactions with the skin and soil microbiome and survival in the environment,” said study co-author Angela Kent, professor in the Department of Natural Resources and Environmental Sciences who directs the Program in Ecology, Evolution, & Conservation Biology in the School of Integrative Biology at Illinois and is an affiliate of the Carl R. Woese Institute for Genomic Biology.

“Understanding the microbial ecology of diseases is critical to protecting threatened wildlife species from emerging pathogens. Microbiome studies are helping us to address this area, and will ultimately lead to improvements in the way we manage wildlife.”

The researchers believe their findings will have broad relevance to other snake species and habitats and will provide insight into mechanisms of pathogen emergence, fluctuations in wellness of individuals, and development of therapeutic interventions.

Additional coauthors on the microbiome study include Dr. Sarah Baker, a postdoctoral researcher at INHS, and Megan Britton, who will complete her veterinary degree at Illinois in 2019.