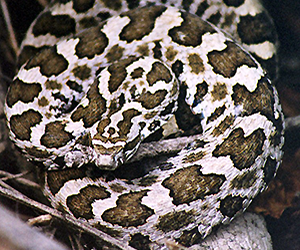 Illinois prairies are an imperiled ecosystem as evidenced by their reduction from an estimated 21 million ha of prairie historically to only 2,300 ha, or about 0.01%, remaining at present. Although primarily lost through mechanized agricultural practices, Illinois grasslands have suffered losses from degradation, urbanization, and invasive exotic species. This widespread ecosystem loss and degradation has ramifications for the plant and animal species relying on those habitats. The Eastern Massasauga (Sistrurus catenatus catenatus) historically occupied wet prairies throughout northern two-thirds of Illinois. Settlement and conversion of prairie habitats for agriculture presumably led to the precipitous decline, noted as early as 1866. In 1994, the Illinois Endangered Species Protection Board listed the Eastern Massasauga as state endangered and it is a candidate for listing under the federal endangered species act (USFWS, 1999). Presently, the Eastern Massasauga may only occur in 1 – 3 extant populations in Illinois and only the Carlyle Lake population is potentially viable. Studies of the Carlyle Lake population began in 1999 and have continued yearly to present.

Studies of wildlife disease in natural populations aid conservation and recovery because many factors lead to immune suppression in reptiles and thus direct or indirect mortality. Commonly, such factors include environmental contamination, habitat alteration (degradation, climatic change, etc.) which then lead to illness, or parasitic infestations. We have performed health surveys and an ophidian paramyxovirus investigation for the Carlyle Lake Eastern Massasauga population since 2003. In 2008, we identified three Eastern Massasaugas from the Carlyle Lake population died from a keritinophilic fungal infection Ophidiomyces ophidiicola(snake fungal disease (SFD); formerly Chrysosporium sp.). Fungal infections in reptiles are typically opportunistic pathogens, infecting animals with depressed immune systems. However, experimental studies show O. ophidiicola can serve as a primary pathogen and source of mortality in reptiles. Since 2008, we have diagnosed six Eastern Massasaugas from the Carlyle Lake population (3 in 2008, 1 each in 2009, 2010, 2012) with an O. ophidiicola infection. Despite treatment with anti-fungal medications in the last three cases, all infections proved fatal (Allender et al, 2011a). In 2011, we began health assessments of the Carlyle population focusing on early detection of the fungus using PCR of facial swabs, but diagnosed none of the 38 animals in the assessment as having O. ophidiicola (Allender et al., 2011b). Given that cases of O. ophidiicola still occur at the site, our failure to detect it in 2011 suggests that the current methods are inadequate and emphasize the need to refine our detection methods.

Detailed study of declining populations is necessary to identify areas having the maximum conservation value. Since 1999, INHS collaborators have collected demographic data on the Carlyle Lake population of Eastern Masasaugas. They have documented relatively high survival rates and a nearly stable population trend which suggests density dependent factors restrict population size at South Shore State Park. Because populations are subject to environmental and demographic stochasticity, only long-term studies can capture the variation in life history traits. Unfortunately, they also found survival rates of neonates are low and the main source of mortality is high predation rates before their first over-wintering. Thus, mortality may be decreased by bypassing this period of high neonate mortality through head-starting, followed by release into crayfish burrows timed to mimic natural ingress.