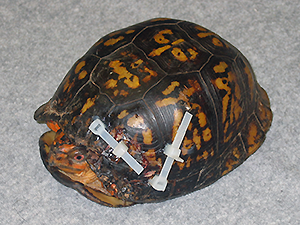 The eastern box turtle is listed in Appendix II by the Convention on the International Trade of Endangered Species, vulnerable by the IUCN red list, and is threatened or a species of concern in several states across its range (insert some turtle pics). Recently, significant declines have been observed in numerous populations due to road mortality, habitat fragmentation, and disease. While a combination of factors is likely playing a role in the decline of the box turtle, disease outbreaks have emerged across the eastern US in chelonians. Specifically, ranavirus and has accounted for mortality events in box turtles in the eastern US.

Since 2007, we have been performing physical examinations, blood testing, and disease investigations of box turtles in both Tennessee and Illinois. Thanks to John Rucker and his turtle dogs we have been able to sample nearly 3000 turtles. We have been able to characterize the health or test for diseases in half of those, making this the largest health project in box turtles ever. We have monitored for infection, organ damage, heavy metal contamination, plasma proteins, while mapping health and disease using GIS technology.

Box turtles are long-lived, inhabit both aquatic and terrestrial habitats, and have relatively small home ranges making them a suitable candidate as a sentinel. To characterize their changes in response to environmental health, assessment of observed variation of this species is required. Thus, a comparative health assessment was employed in 825 Eastern box turtles in east central Illinois and Oak Ridge, Tennessee, to establish a baseline health assessment with regard to sex, age class, season, and location, identify temporal trends, and map parameters. Hematological and plasma biochemical variables measured included packed cell
volume, total solids, white blood cell and differential counts, calcium, phosphorus, aspartate aminotransferase, bile acids, creatine kinase, and uric acid. The top model included the main effects of year, location, and sex, but no interactions. Spatial analysis of turtles in Tennessee demonstrated increased WBC and decreased PCV in 2011 associated with a clear-cut silviculture site. The results of this health assessment can serve as a baseline of population health in future studies and aid in the utility of this species as a sentinel. 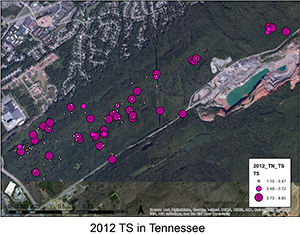 This project began in response to a fatal case of ranavirus in a box turtle in 2003. Ranaviral disease events in amphibians are often clustered into local epizootics, with significant impact on local populations, but natural outbreaks (not related to movement) in reptiles have only been documented once in North America (Vermillion County, Illinois). The effect of population stability in the face of ranavirus outbreaks has been debated. Several reports have concluded that ranaviruses are a threat to biodiversity within an ecosystem, while others suggest it can have a local population impact but does not lead to extirpation.

Unfortunately, this wasn’t the first outbreak in Vermillion County to threaten box turtle conservation. In 2011, over 60 dead eastern box turtles were observed over a two week period in May. Upon follow-up fieldwork, seven of the 12 live turtles found had missing limbs and subsequently died despite treatment attempts. The disease was characterized by necrosis of all tissues with intralesional bacteria. While the ultimate cause of death was not determined immediately, a collection of cases identified Bacteroides in similar lesions of all turtles. The impact of this disease syndrome is unknown, but if it causes high mortality as seen in 2011, it may lead to local population extirpation. 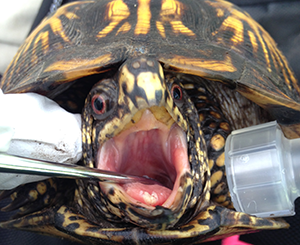 The outbreak in 2011 prompted demographic and health surveillance across Vermillion county that has resulted in collection of over 300 individuals. Furthermore, this health assessment allowed a quick reaction to the ranavirus outbreak in 2013. However, follow-up is desparately needed to characterize the response of the population and establish the risk for long-term sustainability.

There is a large void in the information on natural diseases in box. The lack of understanding of health and disease in box turtles may impact the ongoing conservation strategies for this species and its ecosystem. In a comprehensive epidemiology study investigating ranavirus in box turtles under non-outbreak conditions, prevalence is extremely low.

Current project goals include to further characterize the health of these populations and investigate for new diseases that threaten the conservation of the box turtle. Additionally, we are exploring the role of biodiversity of the presence of these diseases and the impact they have on behavior, transmission, and persistence.