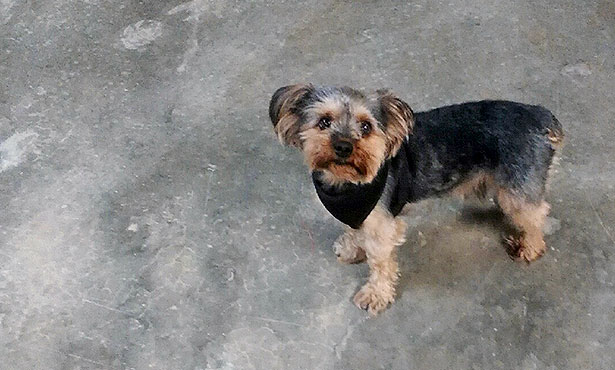 This story about my dog Ozzie starts when I inherited my father’s boat, which was about five years before Ozzie was even born. My father’s boat and I were made in the same year: 1963. For sentimental reasons, my family wanted to keep the old boat even though the motor it had was not really powerful enough to drive it.

To make a long story short, after several years of unsuccessfully looking for an affordable used motor to go with my father’s boat, I found a better motor that came with a boat and a trailer, all at a good price. I bought it, planning to pull the motor off and sell the boat and trailer.

This boat and trailer were in our driveway on July 9 when I let my Yorkie, Ozzie, off the deck to chase a mole that was crossing the driveway. Typically Ozzie would ask to be let back in after about five minutes, but this time he didn’t. My son and I called for Ozzie and drove up and down the road looking for him.

By the time we returned home, my wife had found Ozzie in the driveway under the boat trailer that I had bought to save money. We moved the trailer and boat and I picked up my Ozzie. He was paralyzed from his ears back, and he couldn’t bark or yelp. It was as though rigor mortis had set in. His legs were swollen.

My wife, son, and I drove Ozzie to the nearest emergency veterinary clinic. When we arrived, it was about 3 a.m. I was devastated, and so were my wife and son. The veterinarian took X-rays and did blood work. It all came back negative. At about 5 a.m. we left Ozzie there for observation and headed back home. It was the first time Ozzie had been without us since we got him three and a half years earlier. On our way home, we all cried because we didn’t really know what had happened to him.

About 7 a.m. the clinic called to say that Ozzie was having a seizure and his eyes were rolling back in his head. When we arrived, the seizure had ended, but he still wasn’t able to move. He looked like he was suffering, so I signed the papers to have him humanely put to sleep.

‘Go to the University of Illinois’

My wife reminded me that Ozzie had helped me out of some rough times. I decided to call Ozzie’s regular veterinarian in Vandalia, Dr. Connie Heaton. She told me to bring Ozzie and his records to her clinic. Within 40 minutes of arriving, Dr. Connie told us that little Ozzie had a broken neck!

Four days later, Ozzie could move his neck to look up to the left, but things weren’t getting much better. Dr. Connie informed my wife and me that if we wanted to save our dog’s life, he needed to go to the University of Illinois Veterinary Teaching Hospital.

So of course, we went. Within two hours of checking him in, they gave us the news that he needed surgery. Dr. Benjamin Perry was wonderful. He explained what needed to be done and what it all was going to cost. After Ozzie got a CT scan and an MRI, the surgeon, small animal surgery resident Dr. Clara Moran, told us that without surgery Ozzie would not get better, but with surgery he had a 50/50 chance. We said OK.

Ozzie’s surgery was performed by Dr. Moran and by veterinary neurologist Dr. Devon Hague. At 9:30 p.m. the surgeon called to say that the surgery had gone very well. She didn’t want Ozzie to get excited, so we couldn’t come to see him for a couple of days. When we did get to visit, he still couldn’t move, but we could tell that he was happy to see us.

Every morning and evening we received a call from either a resident or an intern, keeping us up to date. We visited Ozzie every weekend and watched him get better. After about two weeks, he could stand on his own. We took him home on a Saturday about three weeks after the surgery.

‘We Had Quite a Scare’

We thought he was doing fine that weekend, but on Monday morning when I got up, he didn’t move. I felt him. He was cold and wasn’t breathing or moving. We had quite a scare until my wife yelled his name and he raised his head.

We took Ozzie right back to the University of Illinois, where he stayed another two weeks receiving therapy and rehabilitation for his right side, which was slow. When he at last walked out of the hospital, it was amazing to think that just a month earlier he had been paralyzed from his ears back.

Today Ozzie still has some problems walking on our tile floors, but when we go for walks, he runs like he is chasing a rabbit all over again. We walk about a mile a day. He keeps me on the go.

‘Now He Is Even More Spoiled!’

The University of Illinois made it possible for my baby to come back home. He is sort of a special needs dog right now, but he is worth it. Every walk we take, every time he is sitting on my lap or sleeping on my side of the bed all night, he is still alive and at home. My boys thought Ozzie was spoiled before, but now he is even more spoiled!

I would like to thank Dr. Connie Heaton of Vandalia and the staff of the U of I from the receptionists to all the staff and students. The doctors were amazing! They treated us like they cared, and in our time of need it really meant something. I would trust them again if needed—but let’s hope there’s never anything so serious again.