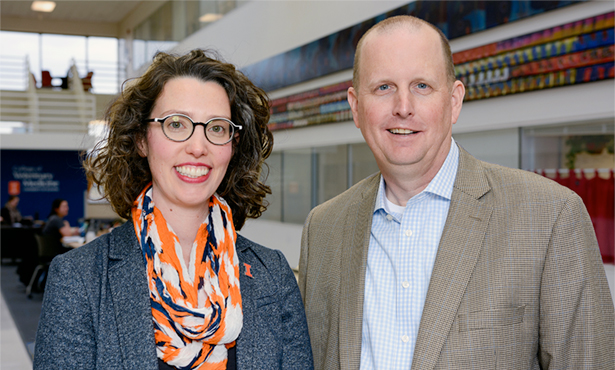 Influenza, SARS and COVID-19 are all zoonotic diseases, readily transmitted from animals to humans. The viruses that cause these diseases also share traits that allow them to quickly mutate, infect widely and spread around the world.

In a new podcast, a veterinarian and expert in zoonotic diseases offers insights into the special characteristics of the new coronavirus that make it more like influenza and less like SARS or the virus that causes the especially lethal Middle Eastern Respiratory Syndrome.

Listen to the podcast

“Most of what we think are the major human pathogens probably started in animals,” said Dr. Jim Lowe, a professor of veterinary clinical medicine at the University of Illinois at Urbana-Champaign and an expert on infectious disease management in agricultural animals. Influenza passes back and forth from humans to other species – SARS likely started out in bats, and MERS has been traced to camels.

Each of these viruses has RNA – not DNA – at its core. Unlike DNA, which is a double-stranded helix with two copies of each of its genes, the single-stranded RNA in these viruses encodes only one copy of its genome. This allows the viruses to quickly mutate and evolve resistance to the body’s defenses or to antiviral medicines, Dr. Lowe said. It also allows them to quickly adapt to new species.

“The viruses that are new and can spread rapidly tend to be more virulent, at least initially,” Dr. Lowe said. “But what I find interesting about the new coronavirus is that it’s actually not very virulent. The case fatality rate is somewhere in the 1% range outside of China.”

This rate is based on preliminary data, he said, and will likely change over time. But early signs suggest that its lethality is closer to that of influenza than to the other coronaviruses.

According to published reports, the case fatality rate for SARS was about 10%. For MERS, it was 35%. SARS “didn’t transmit very well. It died out fairly quickly,” Dr. Lowe said.

He said he expects the new coronavirus to become less virulent over time.

“As these things get more adapted to human beings, they tend to resolve their level of virulence down to something that’s more sustainable,” he said.

He predicted the virus will eventually become endemic, “which means that the disease is here and it’s not going away.”

Humans will have no choice but to adapt to it, much as societies have adapted to influenza, he said. A vaccine may be eventually developed – Lowe said this could take years – and in the meantime, humans who survive the illness will develop immunity to at least some strains of the virus.

“We’ve got transmission, but the disease is generally mild. Most infected people probably don’t even have symptoms,” he said. “We know the number of infections is grossly underestimated. That’s a good sign. That suggests many people have strong enough immune systems to easily fight off the infection.

“There is likely to be a crisis in the short term, as the health care system struggles to cope with the number of people who are sick enough to need hospitalization. That’s unfortunate and sad,” Lowe said. “But ultimately, this infection will likely turn out to be something that we can manage, like we manage the common cold.”

Dr. Lowe is also an affiliate of the Carl R. Woese Institute for Genomic Biology at Illinois.

By Diana Yates, Life Sciences Editor, U. of I. News Bureau. Photo by Greg Boozell.

See the original news release on the News Bureau website.