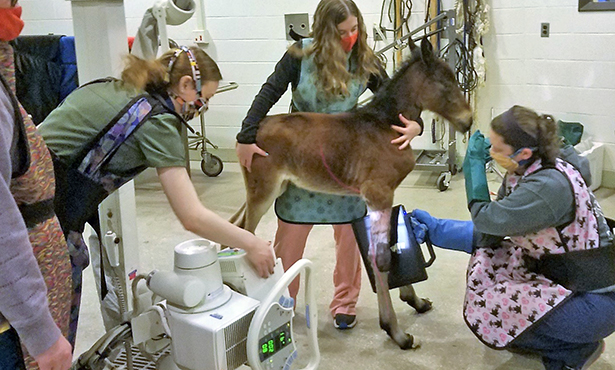 While people are sheltering in place and implementing social distancing, life goes on for some creatures.

In the equine medicine and surgery service at the University of Illinois Veterinary Teaching Hospital, springtime is foal season. Dr. Pamela Wilkins, professor of equine medicine and specialist in equine neonatology, shares details on a few cases she has overseen during quarantine.

“It’s not rare to have a maiden mare struggle with a newborn foal,” says Dr. Wilkins. 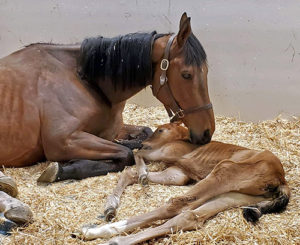 After some help from equine critical care veterinarians, this mare fell in love with her baby.

The pain and stress associated with first-time deliveries may cause mares to fail to bond with or to outright reject a foal. Dr. Wilkins maintains some hope in these situations because, “Sometimes with just a little coaxing at home they can come around.”

Hormonal manipulation was used successfully to stimulate the bonding instinct in a mare whose foal born about a week ago. The mare had experienced dystocia, the medical term for a difficult birth, while the foal was delivered at home. There was tearing of the birth canal, and mother and baby were brought to the Veterinary Teaching Hospital.

“We administered prostaglandin, which made her sweat and go through some of the experiences associated with delivery,” explains Dr. Wilkins. “Then we soaked up her sweat with a towel and used it to wipe down the baby. When the baby was brought back to her, she recognized the foal as her own.”

Dr. Wilkins adds, “Now, they are ‘in love’ with each other.” The pair is expected to go home soon. 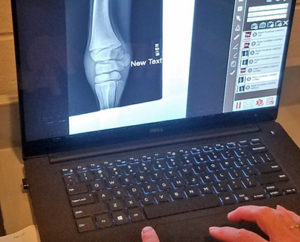 A radiograph shows infection in this foal’s joint. The photo at the top of the page shows the radiograph being taken.

When the dam is not able to care for her newborn foal, the foal is at risk for a number of medical complications. Foals that do not receive colostrum, or first milk, from their dam are susceptible to a high rate of infection.

The mare produces colostrum rich in infection-fighting antibodies only during a short time after birth. The foal must nurse well over about the first 12 hours of life in order to benefit from the immunity passed from its mother. According to Dr. Wilkins, “When a foal doesn’t get colostrum from its dam, we administer antibody-rich plasma and often use antibiotics to prevent opportunistic infections.”

Another patient currently at the Veterinary Teaching Hospital is a foal that was rejected by its dam. Its owners struggled to care for it at home, and eventually brought the foal to the hospital unresponsive and very weak. After a week of intensive care, the foal was able to get up and stand.

However, because it did not have colostrum as a newborn, the foal is now being treated for an infected joint. Luckily, it is feeling much better and is expected to make a successful recovery.

A Case of Twins

Twins are very rare in horses. Dr. Wilkins says, “Horses usually can’t carry a twin pregnancy to term, and if they do, it’s unusual for twins to survive.” 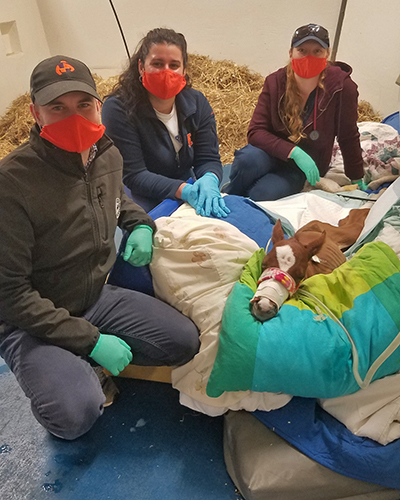 The surviving twin foal, a female, is showing a strong spirit. She is not allowed to stand while doctors ensure that her bones are strong enough to carry her weight.

Veterinarians check for twins via ultrasound early in pregnancy, but it is sometimes very hard to tell that there are two embryos in the mare’s uterus. If the twins are carried by the mare to term, she often suffers from complications during birth because the legs of the foals become intertwined during delivery.

Recently, twin foals were brought to the hospital after being delivered by caesarian section surgery. Unfortunately, due to the severity of her injuries, the mare had to be euthanized without waking up from surgery. When the 12-hour-old premature foals arrived, their combined weight did not equal the weight of one normal-term foal. The colt twin died within 24 hours, but the filly twin has survived and is showing some fight.

Dr. Wilkins is keeping a watchful eye on her condition. “Her body systems are working well, but one concern is that her bones are not fully calcified yet,” she says. Doctors worry that if she stands on her legs with her full weight, the bones could be crushed.

Through a collaborative effort between the equine faculty and rehabilitation services, this little filly is being outfitted with a cart to help her get moving around. Dr. Wilkins and the equine medicine care team are hopeful. “It’s still too soon to know if she will survive, but she is getting the best care possible and we are all rooting her on.”