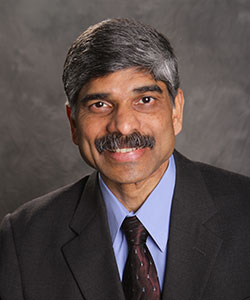 The long-term goal of our research is to understand the mechanisms regulating mammalian spermatogenesis. This is a significant problem to study because the incidence of infertility is on the rise (15% in couples of reproductive age group) and the male factor accounts for approximately half the cases. Currently, treatment options for male infertility are limited due to the idiopathic nature of the disease. Understanding the regulation of spermatogenesis at the molecular level could lead to development of novel therapies for the infertile male. Specific research projects are listed below.

We showed that RNA Pol II pausing maintains the precise spatiotemporal pattern of gene expression within the seminiferous epithelium. Using the spermatid-expressed Acrv1 gene as a model, we showed that Pol II is loaded at the promoter in spermatocytes but is paused to facilitate precise onset of mRNA expression in round spermatids. We predict that pausing coordinates the synchronous stage-specific expression of male germ cell-specific transcripts.

Role of TDP-43 in male germ cell differentiation and fertility

We cloned TDP-43 from the testis and showed that it functions as a repressor of transcription in male germ cells in 2006. Subsequently it was discovered that TDP-43 is causally linked to neurodegenerative disorders leading to intense interest in TDP-43 and 1900+ publications. Our work has focused on the function of TDP-43 in the testis and firmly established that TDP-43 is recruited to the promoter where it represses transcription by holding RNA Pol II in a paused state. Through collaborative work we demonstrated TDP-43 abnormalities in the sperm/germ cells of infertile men. Our unpublished work shows that TDP-43 is essential for spermatogenesis and male infertility.