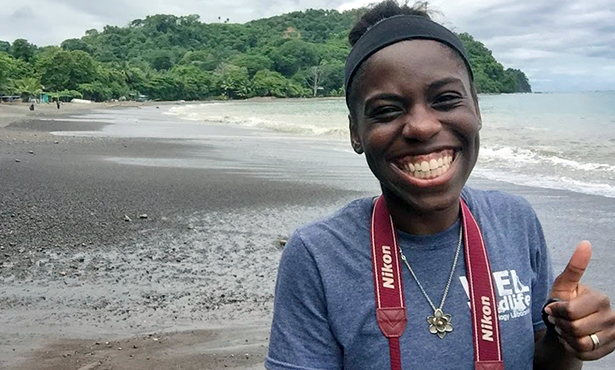 Travel Abroad ‘Can Accelerate Your Education’

Taylor J. Willis insists she didn’t enroll at the University of Illinois College of Veterinary Medicine so she could see the world. It just turned out that way.

Malaysia, Brazil, South Africa, Australia – through externships, spring break excursions, conferences and job shadow opportunities, Willis has circled the globe to enhance her chosen specialty, zoo and wildlife medicine, since arriving in Urbana-Champaign four years ago. Has the Denton, Texas, native always been such an aggressive globetrotter?

“Before vet school, no, sir,” Willis admits. “My family and I traveled a lot within the U.S. when I was younger, but international travel was never on my radar. I didn’t see it coming, but it really impacted me because I got to see veterinary medicine in different lights, how other countries do things differently to accomplish the same goal. It kept my mind open.”

While Willis believes all her excursions have broadened her veterinary vision, she says two weeks in 2017 at the UFPR Veterinary School, Curitiba Zoo, Refugio Biological Park and exotic bird conservancy Parque Das Aves in Brazil may have had the most profound effect.

“It was my very first trip with the U of I, and it was to another vet school,” she explains. “It was interesting to see the academic differences between the two. And to get hands-on experience while being thrown into a different culture you might not know much about, you just gain confidence in yourself, not only as a person but as a veterinary student.”

In 2017 Willis attended an International Veterinary Student Association conference in Malaysia, learning how vet students can contribute to the profession on a global scale. In Spring 2019 she accompanied Dr. Sarah Reich, medical director of the college’s Wildlife Medical Clinic, to Currumbin Wildlife Sanctuary in Queensland, Australia. And last fall she worked with the Veterinary Wildlife Services team at Kruger National Park in northeastern South Africa, one of the largest game preserves on the continent.

“It’s just unreal,” she marvels, “how something as simple as getting out of your country for two weeks can accelerate your education like a million times.”

Of course, Willis was fairly open-minded already. Earning her undergraduate degree in her hometown at the University of North Texas, she had never lived outside the state of Texas until deciding to attend the College of Veterinary Medicine.

“I never even heard of Champaign-Urbana,” Willis admits. “I kind of knew coming in that I wanted to do zoo med. Yes, that can change through the years, but I was pretty dead set on zoo and wildlife. So I went through the process of looking at schools and programs online.

“I read about the Wildlife Medical Clinic here. Then I looked to see which faculty within those related fields had research papers, and there were plenty. Then I saw they had various scholarship opportunities as well as study abroad and international options. So it was just looking at the website and seeing how the program was with zoo and wildlife that brought me here.”

‘The Greatest Experience on Interview Day’

The lifelong Texan remembers her memorable introduction to Midwest living after arriving with her mother, Derbha Jones, for her interview visit. “I was wearing what people up here would call a sweater, Converse shoes and a pair of jeans with holes in them — ‘plane ride clothes,’” she says. “When we got off the plane, it was snowing. I think it was a blizzard. Flights were getting canceled on my interview day. I would admit to you, I had a little bit of weather shock.”

Walking into the school, the first person I happened to talk to was Dean Foreman. … For me, that conversation, along with seeing how he and the office staff interacted with me and my mom like we had been part of the college family forever, that was a big deal for me.

However, she quickly adds, “I had the greatest experience on interview day. I know some people frown on having your parents go with you for grad school interviews. ‘You’re past your undergrad days, you should be able to go by yourself.’ But family means everything to me, and my Mom is quick to tell me if she doesn’t feel I’ll be comfortable in a place. This was such a big change for me, I wanted her opinion.

“Walking into the school, the first person I happened to talk to was Dean [Jonathan] Foreman [Associate Dean for Academic and Student Affairs]. I had no idea who he was! It was just a very casual conversation, asking me if I was nervous, where I was from, did I have an idea what I wanted to do. For me, that conversation, along with seeing how he and the office staff interacted with me and my mom like we had been part of the college family forever, that was a big deal for me.”

Willis’ mother and father, Reginald Jones, both originally started their careers as X-ray technicians, and Willis vacillated between med school and vet school deep into her undergraduate career. She would volunteer at a zoo one summer, a nursing home the next.

“Then I shadowed an orthopedic surgeon,” she recalls.

“I watched one rotator cuff surgery and almost passed out,” Willis says with a laugh. “I’m not a squeamish person, and I’m not saying I don’t get a similar feeling watching surgery on dogs, cats or bigger animals like rhinos. But every move the surgeon made in the person’s shoulder, I felt it, too. I was like, ‘Oh, maybe this isn’t for me!’”

A subsequent volunteer stint, as camp counselor at a zoo close to home, solidified her passion. “Teaching, educating the future generation who love animals was a big deal for me,” she says. “I saw how I could handle the animals I love the most, realized I would love to have more experience with them, and saw how education can play a role in conserving those animals as well.”

And which of those animals does she love most? “Among zoo creatures I would have to say the great apes,” Willis replies. “If I had to pick one, it would definitely be chimpanzees. Even though they can be terrifying, and I respect that they are highly intelligent creatures that can do damage if I do something to make them feel threatened, I am mesmerized by them.

“It blows my mind watching interactions between zoo staff and the chimps they work with. It is a connection, a bond like I’ve never seen between a human and an animal. The staff is part of their family, and the chimps are part of ours. It’s wild.”

Her first step after graduation will be a little less wild: “I’m headed to Gulf Coast Veterinary Specialists in Houston, Texas, for a one-year small-animal rotating internship with a little bit of exotics. So I’ll get to be close to home for the year,” she says.