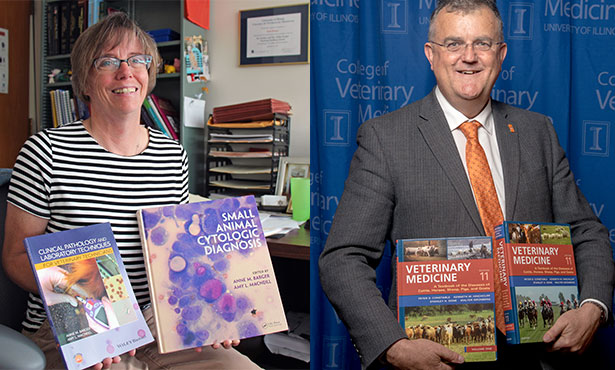 They Wrote the Book on It

Since its founding, the College of Veterinary Medicine has been the academic home of faculty recognized for compiling the definitive body of knowledge in their fields. Extending this long line of experts, Dr. Anne Barger and Dean Peter Constable have both recently published textbooks.

“The publisher is based in Great Britain, and they asked us to make the list of contributors as international as possible,” notes Dr. Barger. “As a result, I’ve made tons of new connections in the field, and even was invited to speak at a meeting of the European Society of Veterinary Clinical Pathology.”

Chapters have been written by veterinarians from Austria, Canada, France, Italy, and South Africa, as well as from eight states in the U.S. Contributors feature five of Dr. Barger’s colleagues at the University of Illinois. The book is more than 500 pages long and includes more than 1,300 images.

Veterinary Medicine: A Textbook of the Diseases of Cattle, Horses, Sheep, Pigs, and Goats, published by Elsevier, is the most extensively cited textbook in veterinary medicine. Dean Constable became one of its authors for the tenth edition, issued in 2007, and was the lead author, along with Drs. Kenneth Hinchcliff, Stanley Done, Walter Gruenberg, of the new, two-volume eleventh edition.

The text takes a global perspective not only by covering clinically important diseases of large animals worldwide, but also because the education and practice experience of its four authors and nine coauthors took place in 12 countries on five continents.

“Substantial changes were made for the eleventh edition,” notes Dr. Constable, “including the reorganization of material to reflect which primary organ system is affected, the addition of more than 150 new figures, and incorporation of peer-reviewed references since 2006.”

Also carrying a 2017 copyright date is the sixth edition of Pathologic Basis of Veterinary Disease, edited by emeritus faculty member Dr. James Zachary and published by Elsevier. This text includes an Expert Consult website with access to the complete book in digital form, plus thousands of images.

In the digital age, more and more Illinois faculty are delivering definitive texts online. Dr. Maureen McMichael’s recent books have included the second edition of Handbook of Canine and Feline Emergency Protocols, in 2014, and the 2016 Life-Threatening Cardiac Emergencies for the Small Animal Practitioner, written with Illinois colleague and cardiologist Dr. Ryan Fries, both published with Wiley. She is currently working on a book that will exist only in digital format.

“It’s a K9 emergency field guide for first responders,” explains Dr. McMichael. “It will have video, schematics, images, and links and it can be personalized for each handler’s dog with their resting vitals, working vitals, weight, and other important information.”

The publisher is EText@illinois, part of the university.

Drs. Brian Aldridge and Jim Lowe recently received an innovation grant from the Provost’s office to create a second MOOC on sustainable food production. The collection of microlectures that will comprise the course, in essence, forms a 21st century textbook.

“We’re delivering the definitive knowledge in this field through an interactive, digital format for a global audience,” says Dr. Lowe.