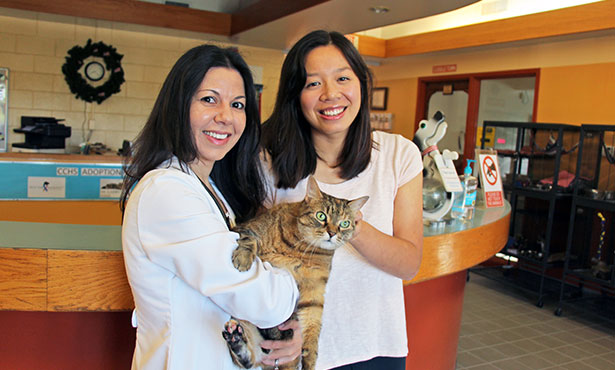 Mandy Erdei has a special place in her heart for shelter animals.

Not only did she grow up with dogs adopted from shelters, but she herself is adopted.

“I’m happy to pursue any opportunity to increase an animal’s chance of getting adopted into a forever home,” she says.

This past summer, Erdei, a third-year veterinary student at Illinois, teamed up with Dr. Loukia Agapis, an instructor in the shelter medicine program, to study whether acupuncture could reduce stress in shelter cats awaiting adoption.

Ours is a radical concept. No shelters are offering acupuncture. If we find that this treatment is effective, the practice could be easily implemented.

Animal shelters tend to be extremely stress-inducing environment, especially for cats; stress harms the body, regardless of species. Reduction in stress through acupuncture has the potential to reduce chances of upper respiratory diseases, increase an animal’s well-being and comfort, and—since happy and healthy cats may be more desirable to potential adoptive families—increase the cat’s adoptability.

From May through August, Erdei collected data at the Champaign County Humane Society, evaluating a total of 60 shelter cats. The study design was single-blind: Dr. Agapis, who has trained with the International Veterinary Acupuncture Society, knew which cats had received acupuncture, but Erdei did not.

“We are so thankful to Champaign County Humane Society for allowing us to conduct the study in their facility,” says Erdei. “Purina donated many items to the humane society as a thank you for allowing us to carry out our project there. And the study was only possible through a generous grant from Maddie’s Fund.”

Maddie’s Fund is a family foundation based in Pleasanton, Calif., that is dedicated to improving the well-being of companion animals across the United States. Established by David and Cheryl Duffield in memory of their miniature schnauzer, Maddie, the fund has awarded more than $208 million in grants since 1994 to save animal lives, improve shelter medicine education, and promote pet adoptions.

Erdei, the first University of Illinois student to be awarded a Maddie’s Fund grant, plans to continue working with shelter animals after graduation.

When new shelter cats arrived, Dr. Agapis performed a general examination of each animal and, using a random method, determined which cats would receive an acupuncture treatment. On each of the following three days, Erdei observed and recorded each cat’s behavior using a standardized evaluation. She was looking for such signs as socializing, playing with toys, and self-grooming, which indicate that the cat feels comfortable.

“We practiced stress-free handling,” says Dr. Agapis. “We did not want this additional treatment to add to the cat’s stress or disrupt the flow of the shelter.”

The specific mechanism by which acupuncture works is largely unknown. The practice stems from traditional Chinese medicine, but has gained popularity in the evidenced-based practice of Western medicine in recent years.

“It is thought that acupuncture is effective because the needle placement accesses pressure points that run along the body, referred to as ‘meridians,’ that may correspond to nerves,” explains Erdei.

“In traditional Chinese medicine, a behavioral issue like stress is considered a Shen disturbance and thought to arise from an unbalance of yin and yang. So essentially, by stimulating the pressure points with the acupuncture needles, we are trying to restore balance,” adds Dr. Agapis.

For this study, Dr. Agapis selected points behind the ear, on top of the head, and behind the forelimb, specific points she had previously used in dogs with good success.

We have high hopes for this project, but regardless of the outcome, I am excited to have been involved in the process. After all, without research, we cannot move forward.

“One of the great things about acupuncture is that it has nearly no side effects. It is extremely safe. The sterile needles used are five times smaller than those used to draw blood, and most animals do not even feel them,” explains Dr. Agapis.

Previous studies have shown that acupuncture can reduce stress in horses and people; Erdei and Dr. Agapis believe theirs is the first study to look at stress reduction via acupuncture in shelter cats.

‘Forever Home’ Is the Goal

As the fall semester gets under way, the two researchers are in the data analysis stage of the study.

“Ours is a radical concept,” says Dr. Agapis. “No shelters are offering acupuncture. If we find that this treatment is effective, the practice could be easily implemented. Any veterinarian could be trained to perform this treatment, and the only supplies needed are the needles, which are inexpensive.”

Erdei adds, “We have high hopes for this project, but regardless of the outcome, I am excited to have been involved in the process. After all, without research, we cannot move forward.”

“The goal of any shelter animal is to get adopted into a forever home, and this is overall what we hope to aid with this study,” says Dr. Agapis.