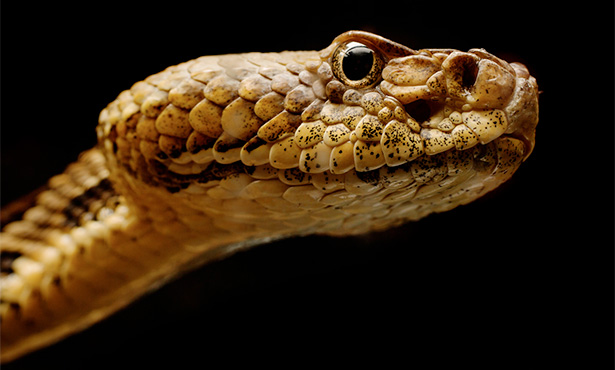 Biologists and veterinarians across the central and eastern United States are calling on researchers at the University of Illinois to help them identify, understand and potentially treat snake fungal disease, a baffling affliction affecting more than a dozen species of wild and captive snakes in at least 15 states.

The Illinois team, led by veterinary clinical medicine professor Dr. Matt Allender and his colleagues at the Illinois Natural History Survey, are targeting every aspect of the disease – its epidemiology, how it grows, how it is transmitted, how to treat it, and even which disinfectants work or don’t work against the primary fungus associated with the disease, Ophidiomyces ophiodiicola.

“We have collaborative projects in nine states,” Dr. Allender said. “Some of our collaborators are just sending us samples and we’re helping with the diagnostic testing. Others, including individuals at some zoos with infected snakes, are working with us to test new treatments.”

One treatment now in testing involves nebulizing snakes individually in tanks, a drug-delivery method sometimes used on birds with respiratory problems. (Watch a video about this work.)

“Before this, nobody had nebulized a snake,” Dr. Allender said. “When I told my veterinary colleagues – not biologists, but people who treat individual animals – what I was planning, they said, ‘That’s never going to work.’”

Dr. Allender and former veterinary student Lauren Kane demonstrated, however, that administering treatments via a fine spray allows therapeutic levels of terbinafine, an antifungal agent that kills O. ophiodiicola in cell culture, to get into healthy snakes’ blood plasma. Their report on this work appears in the Journal of Veterinary Pharmacology and Therapeutics.

The researchers are testing whether snakes with the disease actually benefit from the nebulizer treatment.

Many other studies from Illinois will help those hoping to respond to snake fungal disease. One study, led by Dr. Allender and first-year veterinary student Marta Rzadkowska and published in the Journal of Wildlife Diseases, reveals which disinfectant treatments – used by veterinarians and wildlife biologists to prevent the spread of infection – work against the fungus.

“Marta found lots of disinfectants that were effective,” Dr. Allender said. “But it’s the ones that are not effective that are the bigger story, because those are the ones that the fungus is resistant to.”

Other recent advances on understanding snake fungal disease have come from Illinois, including a 2015 analysis led by INHS mycologist Andrew Miller and graduate student Daniel Raudabaugh. This was the first in-depth analysis of O. ophiodiiocola, focusing on what conditions are conducive to its survival. The team found many similarities between this fungus and the fungus that causes white-nose syndrome in bats.

They also demonstrated that O. ophiodiicola infection is a causative agent of snake fungal disease. Healthy captive snakes that became infected with the fungus experienced the same symptoms and decline seen in infected snakes captured in the wild, the researchers found.

Dr. Allender and colleagues at several other institutions also are studying treatments other than nebulizing snakes. One particularly worrisome finding, to be published soon in the Journal of Zoo and Wildlife Medicine, is that treatments with voriconizole, an antifungal drug often used in animal care, sometimes kills even apparently healthy snakes.

“We’re trying to protect an endangered species,” said INHS herpetologist and postdoctoral researcher Sarah Baker, a collaborator with Dr. Allender on several studies. “A lot of pit viper populations are declining – not only in Illinois, but nationwide. Snake fungal disease is just one more threat that they have to contend with, and anything we can do – to find effective treatments, for example, or disinfectants that stop people from spreading the disease from place to place – could make a difference for their long-term survival.”

Dr. Allender also is an affiliate of the INHS, a division of the Prairie Research Institute at the U. of I.

Numerous sources, including the U.S. Fish and Wildlife Service and the Illinois Department of Natural Resources, support this research.

Read the original article with links to the researchers and publications.