Week 2: Lifestyles of the Rich and Famous

Two weeks in and we are already famous (and a little rich in terms of vet student status since we passed our first pay day). Well not really, but we did appear in the background of a few news stories featuring LCFPD’s Blanding’s turtle head-starting program. What we really care about getting famous is our state-endangered Blanding’s turtles. Several local news squads joined us in the field this week to focus their stories on the head-starts. Over the past few years, the recovery program has released close to 900 young, juvenile turtles into the Lake County wetlands. The idea of this program began when predation was recognized as one of the top hazards to population growth. Predators such as raccoons and skunks are of top threats, responsible for destroying 93% of turtle nests in the wild and most often within 48 hours of females laying their precious cargo. Head-starting allows eggs to be incubated and hatched in captivity, newborns to develop and grow for a year or two, and released to go on doing 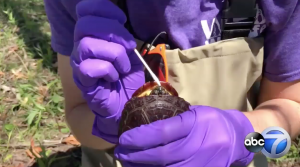 what they do best – being a wild turtle. The most rewarding part of this program is not to simply release these new turtles into their environment, but to find them again in the future indicating survivorship and hope for future generations. Being that these turtles do not reach maturity until 12-15 years of age, releasing a bunch of juveniles and not knowing whether they make it or not does not prove they are contributing to a sustainable population. It is then why trapping is monitoring of these populations is necessary. On a real note, how cool are our purple gloves that match our purple shirts? Thanks Dr. Allender for the color coordination and making us look top notch in fresh apparel!

Check out our Rich and Famous news segment:

So all this is super cool stuff, but what do we as a veterinary team do to fit into this whole “save the turtles” project? Let us enlighten you. 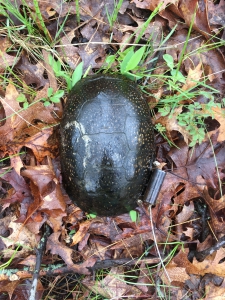 Every day the two of us split up to cover as much ground as possible. We each go with a group of biologists to a field site where we assist in tracking turtles with telemetry (radio antennae signaling) and checking traps. There are over 50 turtles that wear telemetry on their shells and each of these individuals are tracked at least 3 times every two weeks. We as team vet only sample each individual once per month, so outside of our sampling time we help collect data such as weight and GPS for the wildlife biologist team. Traps are set out every Monday and taken in every Friday; each week in different and new spots hoping to find turtles we haven’t seen in a while (as in years). These traps are baited with canned sardines – yup, never eating those in the future. For every Blanding’s turtle found in a trap, we get to whip out our fancy tackle kits of needles and swabs and collect health samples. In the field we collect blood from the subcarapacial sinus and swab for DNA in the mouth and cloaca. We do a complete physical exam, take weight, snap photos, get measurements, collect GPS and environmental temperature, record all of this in a complex file on our phones, place our samples in a cooler and sprint (if that’s what you call it in sweat-soaked waders) to catch-up with the biologists who are on to the next trap and next turtle. This carries on until early afternoon, when we head back to what we 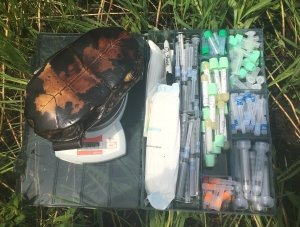 call the “Turtle Building” to run lab work on all of the samples we collected for the day – of course with good music and sounds of growing, head-start turtles splashing around in tubs in the background.

Enough with the technical stuff though. We know you just want to hear about the good, the crazy and the hard times we experience each and every day. For our consecutive blogs, that is precisely what we have decided to share with you while incorporating in some fun fact stuff as well.