Its been another exciting week for dragon team! With only four weeks left until classes start Ivana and Bryce are really trying to enjoy their last few weeks of summer with the bearded dragons and the epi lab before their lives get a little busier. 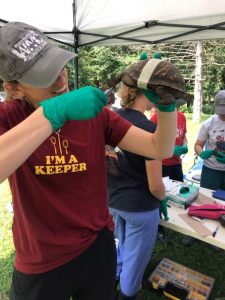 This week, Ivana spent much of her time helping turtle team collect data on box turtles around central Illinois. This was done through a variety of methods including drawing blood which can help determine the health of the turtles, along with measuring ocular pressure and measuring the general body condition of each turtle. One of the special things about this turtle outing is the use of the turtle dogs which help find the turtles using their amazing sense of smell. However, even with the use of the turtle dogs the turtles were difficult to find this week most likely because of the heat from the previous week which caused the turtles to burrow making them harder to find.

Bryce this week was busy working on his thrombocyte/leukocyte rich plasma. This study has allowed Bryce to increase his proficiency in blood draws from bearded dragons along with PCV/TP and hemocytometer use. So far, the study seems to be going well with mostly consistent results and he is getting much better at running the study, learning how to juggle multiple pieces at once.

The bearded dragons this week are doing great, and they even got some special attention from the interns, helping the interns practice basic veterinary care for lizards.

About the Author: Ivana and Bryce

Ivana and Bryce are both second years in the Wildlife Epidemiology Lab. Ivana is interested in a career in veterinary medicine related to zoological companion species. She is passionate about working with exotic pet species, strengthening the human-animal bond between these species and their owners, and improving the overall quality of animal care through research. Bryce is interested in working with all zoologic species although he is particularly interested in reptiles. He understands that there is a lot to be discovered about zoologic species and the diseases that impact them and is excited to contribute to the expansion of that knowledge.