Nesting season is winding down and that means that we are no longer monitoring our turtles at night to see where they lay eggs! We were able to follow a total of 21 turtles as they naturally nested in the wild and those nests will be periodically checked for depredation (destruction of nest by animals like raccoons or skunks who eat turtle eggs) until they hatch!

In the wild, a Blanding’s turtle will typically nest in June. Nesting females can travel distances of two miles to reach their preferred nesting site! Many females have sites that they return to year after year and so when a turtle we are tracking moves a large distance very quickly around the month of 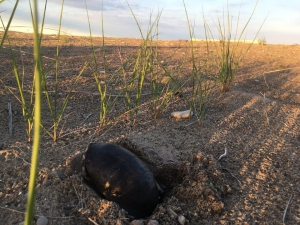 June, we can be pretty certain that she is preparing to nest! Blanding’s turtles nest at night presumably in part to make it harder for predators to find the nests but can begin digging holes before sunset. During the night, the female may start to dig several different holes only to abandon them and move to dig a new hole. Females may continue this behavior for several nights, never completing a hole and laying eggs until all of the right conditions are met, many of which are still unknown. A completed hole is flask shaped and is roughly 12 cm deep with enough room to lay and bury the eggs. The female will dig with her front legs and back legs, and will also use her back legs to position the eggs after they have been laid. After all eggs have been laid, the female can spend several hours covering up the hole and then may spend the rest of the night under cover near the nesting site or make the journey back to her home range that very night. The eggs will spend approximately 2 – 3 months incubating (60 days) until they hatch. The hatchlings remain in their nest cavity after hatching to absorb the yolk from the eggs. After the yolk sac is absorbed, the hatchlings emerge to begin their own journey and find a home range.

Challenges to this natural cycle of nesting include nesting sites being developed on, depredation, and a low hatchling survival rate. The encroachment of people on historical nesting sites can lead to turtles wandering on roads and through populated areas to find nesting sites which may not exist anymore. And as discussed in previous blogs, overly inflated populations of mesopredators like 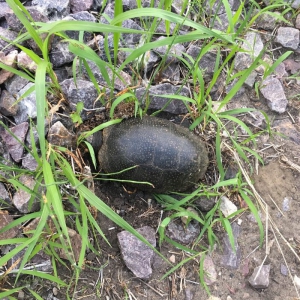 raccoons can lead to increased numbers of nests being destroyed and eaten. In Lake County, before the introduction of raccoon management at certain Blanding’s turtle sites, 92.3% of all monitored Blanding’s nests were depredated before the eggs had a chance to hatch. Given that in these same areas, Blanding’s turtle hatchlings born in the wild have a less than 1% chance of making it from egg to adulthood, these factors together create an unsustainable trend that contributes to the decline of these Blanding’s populations. Today, after a few years of raccoon management (was first implemented in 2013), we see that depredation of nests has decreased to 40% of monitored nests. Hopefully, with continued management along with other programs aimed at supporting Blanding’s in these areas, these populations will progress towards self-sustaining.

A program that all begins with nesting season is Lake County’s Blanding’s Turtle Recovery Program. This program utilizes the action of head-starting populations from young Blanding’s born and raised in captivity. Each season approximately ten gravid females are brought to McHenry County Wildlife 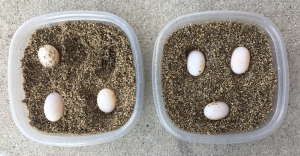 Research Center to induce egg-laying. Currently prostaglandin is the drug of choice used to induce oviposition in Blanding’s turtles. Oxytocin had been used in the past however had been noted to cause effects such as turtles still exhibiting nesting behavior once returned to the wild, making them more prone to predation or trauma while looking for the perfect place to “nest.” Eggs are collected from these induced turtles and they are homed in an incubator at the Wildlife Research Center for development, while the female is returned to her natural habitat. Once in substrate and placed in an incubator the eggs can not be rotated or fiddled with; when an egg is laid the embryo inside attaches to the wall of the shell. Tampering with the egg can cause movement and deformation of the developing embryo, with a chance of embryo death. Physical development can be controlled with incubation temperature. Females tend to develop close to 30.5 degrees Celsius while males tend to develop in conditions closer to 26.5 degrees Celsius. Half males and half females are targeted for in 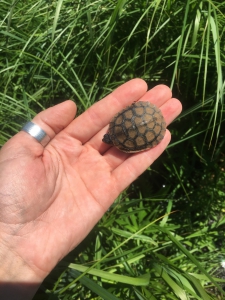 hopes of further increasing population numbers – this is about what would happen in the wild. When eggs are incubated in captivity it takes about 45 days, compared to 60 in the wild, before hatching. This year we had ten turtles induced resulting in 128 eggs (plus Abigail’s 6 eggs)! About 85% of these will hatch successfully in captivity. The goal of the Recovery Program is to release 100 head-starts each year and this will surely be met for 2017. Hatching and raising these head starts in captivity provides a better chance of survival in the wild. Turtles that are at least a couple years old and significantly larger than newborn turtles have a better chance of reaching that sexually-mature adult age of 14-20 years old. These turtles that are then released into the wild to carry on their journey as termed head-starts. In future years, finding these turtles is a good reflection of population and species success. Recently, Lake County has initiated a program where you can “adopt” one of these turtles! By donating to the Blanding’s turtle recovery program you get the opportunity to name a specific turtle in which you receive a photo of and any future updates when that turtle is found in the wild – all while supporting an endangered species. Attached is a link where you can adopt one yourself!

This past week we have started to re-sample the tracked turtles for a second time. Over the course of the summer we are aiming to attain four samples from each of the approximately 50 telemetered turtles (May, June, July, August). We will be trying for all the turtle we come across to get multiple 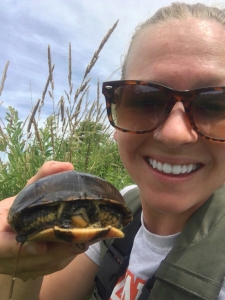 samples, but we don’t have a sure chance of seeing our trapped and handcaps again after we initially sample them. I was out with a telemetry set looking for Starla, a female who had just previously nested, when I “kicked” what I thought had to have been a turtle with my boot in the water. It certainly was – yup, this is a hand-capture! It was notched and so I sent the code to Gary who returned me with information that it was a head-started 2014 turtle and was also an initial capture for the year! It is always exciting, especially this far into the summer to get a turtle that has not been seen yet this season. I took a “shellfie” (turtle-selfie), marked GPS and put that gem into the front pocket of my waders to carry on in search of Starla. This was my high. I carried on and trekked through a fairly deep stream to find Starla where she swam around me in circles for five minutes. When I finally got her I put her in my backpack, packed up my telemetry and headed back to the base of our field site to work up these two turtles. I got back and unloaded my gear, took Starla out of my backpack, and reached into my pocket for my hand capture and… there was no turtle! It was gone, jumped out, disappeared, teleported somewhere somehow! This was my low. I walked the same trail back and forth twice while returning Starla and no sign of ghost turtle. It was a sad moment but that is when I decided I knew where I wanted to stack some of my traps for Blanding’s Bowl.

This past week’s high was realizing how much more proficient Lauren and I are in the lab!! We had a few challenging days this week with the start of re-sampling all of our telemetered turtles again with one day giving us 16 samples! At the beginning of the summer, that amount of samples may have taken us until past midnight to finish but this week we were able to breeze through hemocytometers and PCV/TP to allow us to be home by 9:30! It was so rewarding to reach a visible benchmark in our lab skills and I can’t wait to see how much more we can improve throughout the rest of the summer!

My low for this week was having a battle over my traps with a gang of raccoons. I set my turtle traps this week in an area that has dried up significantly with the lack of rain in Lake County over the past couple weeks. Some of my traps had to be set in shallow water and when I checked them the day after setting them, HALF of my traps had been dragged out of the water and the sardine cans ripped open and emptied! I had known that raccoons were in the area but I was surprised at their resourcefulness and dexterity it must have taken to remove the sardine cans and rip them open! By the end of the week, 6 of my 10 traps had their sardine cans eaten on multiple days and one of my traps was hidden or dragged so far away from its original site, that I was unable to find it again! It was amazing to see how smart and crafty these raccoons could be, but it would have been more amazing if they could have been crafty with something other than my traps this week. 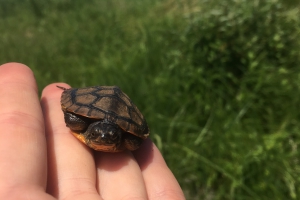 About the Author: Lauren and John

John and Lauren are rising second-year veterinary students spending the summer analyzing the health of the Blanding's turtle, a state endangered species.