The first turtle nested! She made a run for it, dug a hole and layed her eggs like a pro. She is a newly tracked turtle this year so we weren’t sure when or where to expect her to nest but she did so and it was all exciting! Until… the next day we went back to her nesting site and that once held 9-15 precious endangered Blanding’s turtle eggs was a hole with eggshells scattered on the surface. Her nest was depredated. Now, the first question that may come to mind is, why didn’t we protect the nest? Maybe put a board over the top for a week or two? Put chicken wire around it? Well the thing is, first it is necessary to understand natural nest survival rates and prove the largest threats. The second thing is, a goal is to make this population self-sustainable and independent of human management. 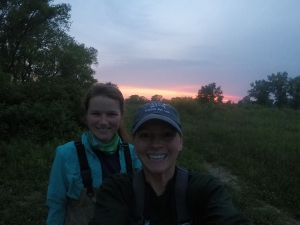 Nesting season is in full swing and the gravid turtles are very particular about where they are going to dig and dump their eggs. First things first, they need to find “diggable” land – some dirt, some sand, some place where they wont get submerged in water. What is so neat about this? Well, each turtle tends to have a home territory where they like to stay throughout most of the summer. They move around from swale to swale, from water to land, but for the most part they stay within the same ¼ mile stretch… that is until they are ready to nest. Blanding’s turtles are known to travel up to TWO MILES to find nesting grounds. One way that we know they are getting close to laying their eggs is they really start to move. The other thing about these Blanding’s turtles is that they nest at night, so we have a night crew of biologists who go out from sunset until 2 am to spy on the nesting turtles and identify nesting locations. This is why we know that a good amount of turtles like to nest on the beach or on the train tracks. This also allows for the LCFPD recovery program to identify nest survival rates. Of course, we had to get the full Blanding’s experience and go out with night crew a time or two just for fun.

You know what doesn’t mix well with night crew? A fear of the dark. You know what I have? A fear of the dark. Night crew was an extremely exhilarating (and terrifying) experience. I went out with Maria, one of the wildlife techs who also has a fear of the dark. We both really enjoyed walking along the beach tracking Anneke before the sun went down, but after that, the headlamps went on and the flashlights came out. Unfortunately, Anneke did not nest that night, so I was not able to see firsthand what it looks like, but Maria and I did find evidence of her digging practice nests. Despite a few jumpscares from some of the other members of our turtle team, it was a pretty cool night!

Beavers, bugs, and Paulie are three words to describe my night crew experience. One of our field sites has a known population of beavers who are not portrayed as the most pleasant of creatures. Although I never saw one in the pitch black

(probably for the better) when we would get too close to the waters edge a startling tail slap would smack the water and knock me into sheer terror. The bugs were terrible. It’s that summer night season when all the mosquitos are out for blood thirsty meals. At one point while driving between sites I literally googled “why are

mosquitoes good.” Did you know mosquitoes are pollinators? And they also make food for a lot of different critters including snakes, frogs, bats etc. Thankfully the species most known to transmit diseases are not in our neck of the woods. Finally along came Paulie. Paulie is a turtle who has been around for a while – she was caught in a fire several years ago and spent a couple years of her life at the Turtle Building recovering. She was released back to the wild last year and this night, we found her nesting! 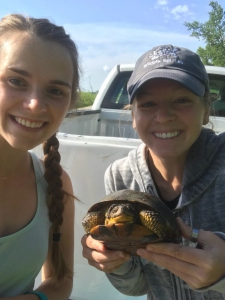