A plethora of boats, one Great Lake, and A LOT of snakes. Our first of two weeks out in Lake Erie has been quite an adventure already! Although we still have one more week here and plenty of more snakes to catch, Team Snake has been getting a lot of work done and has been collecting a lot of data for the annual Lake Erie water snake surveillance study. 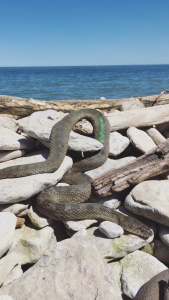 These two weeks have been brilliantly dubbed the “Nerodio”, inspired by the genus name of the Lake Erie water snake; Nerodia. This unique subspecies of water snake is a great example of conservation efforts making a positive impact. With fewer than 2000 adult individuals existing in the wild population in 1999, the Lake Erie water snake was placed on the federally endangered and threatened species list. With persistent conservation efforts, they were removed from the list of federally endangered and threatened species list in 2011. Although they are no longer federally listed, they now face a much larger problem: snake fungal disease.

Every day, Team Snake and the Stone Lab have been visiting various sites on multiple islands in Lake Erie in order to perform the annual surveillance study. Our day typically starts by meeting in the Stone Lab early in the morning to collect our gear and to go over which sites we would like to survey for the day. Once we have our game plan ready and our gear packed up, we catch our boat and head out to one of a handful of islands to start looking for snakes.

Looking for Lake Erie water snakes can be quite tricky. Not only can they be particularly difficult to spot but they can be alarmingly fast when fleeing as well. Not to mention, the snakes will not be shy to bite you if they are captured. Despite all that, Team Snake is always up for the challenge. With one or two pillow cases in hand, we scale the rocky shores and start looking for snakes. Lake Erie water snakes can be found in various ways. Sometimes they are simply basking on top of or resting underneath some rocks. Other times, they are high up in a tree branch above the water which then requires some of the best team work dynamics in order to successfully capture them. 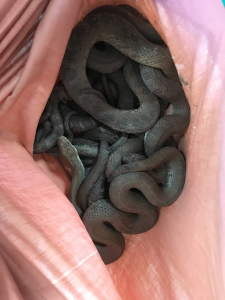 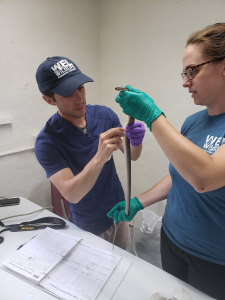 Swabbing the ventrum of a Lake Erie water snake

Once our pillow cases are full and we feel that we have caught enough snakes, we begin to process the snakes. Processing can be a bit time intensive as there are many steps that must be followed during processing. Frist, each snake is given a thorough physical exam by Team Snake. We look for any kind of lesions that could indicate snake fungal disease and make record of them. Following the physical exam, we perform a full body swab of the snake with a cotton top applicator. The body swab will be taken back to the Wildlife Epidemiology Lab for further analysis and will let us know how healthy each respective snake actually is. Once Team Snake is done with our part of processing, we hand the snakes over to the Stone Lab team. Each snake has various bits of information documented such as; snout-to-vent length, weight, and which site they were found at. Additionally, every Lake Erie snake must have some form of identification so that we can keep track of individuals overtime. In order to do that, a PIT (passive integrated transponder) tag is administered sub-cutaneously into each new snake that we capture. Although snakes lack any limbs, they can certainly be a handful! 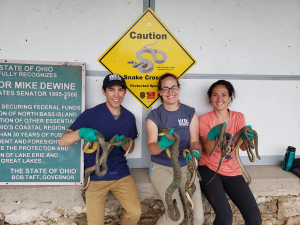 The first week of Nerodio sure has proven to be VERY busy and at times exhausting, but nevertheless Team Snake couldn’t be happier to be out in the field in Lake Erie. With week 1 quickly coming to a close, we are packing our things for week 2, where we will be stationed on Kelly’s Island to continue the annual Lake Erie water snake surveillance study. Stay tuned for the next blog post for more adventures from Team Snake!