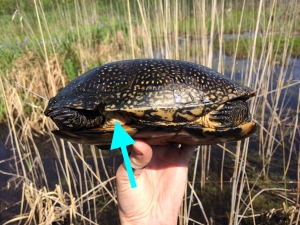 It is that time of season where female Blanding’s turtles are becoming gravid (carrying eggs). These turtles have delayed maturation, reaching sexual maturity between 14-20 years of age, which this one of the reasons for an unsustainable population. The amount of turtles that survive to this age, avoiding habitat destruction, road mortality, and predation, is on the low side. The females that are this age are the ones that are monitored, tracked, and/or induced for egg collection for the head-starting program. These ladies typically lay between 6-15 eggs. How do we know these turtles are gravid? They don’t exactly have a bulging belly. Instead we must use our palpation skills (feeling with our fingers) and place a finger in the prefemoral fossa to feel for mini ping-pong balls. After feeling a few turtles we have gotten better at distinguishing how far along they are in their gestation period which is about 60 days. We have been able to differentiate between follicles, soft eggs, and hard eggs! We are expecting to see these turtles make some big moves and start traveling in the next week or two, lay their eggs in what they find to be the best spot and leave the rest up to nature. Nesting season is coming in hot!

No explanation for this video, but just give it a listen. One of my favorite things to hear in the field is someone screaming “HANDCAP!” We all strive to get handcaps everyday. A handcap, or a hand capture, is when a turtle is found without using traps or telemetry. Oftentimes, these turtles are sitting on cattails basking or walking across our path, making them pretty easy to spot. The best part? The shellfie, of course! All of the biologists and vets who work with the Blanding’s turtles have a GroupMe that we use to communicate throughout the day. It is a requirement that you take a selfie with your hand capture, because you know what they say: “Pics or it didn’t happen.” But in all seriousness, it is really exciting to find hand captures, and we like to pat each other on the back when we find them! It is especially exciting to find gravid females or headstarts that were released a few years ago. You can spot some of our shellfies below!

Each unique Blanding’s turtle is identified several different ways. For one, they each have their own notch code. The scutes around the outside of their shell get filed in a specific pattern that no other turtle has. Secondly, some of the older turtles have pit tags in their hind legs – just as you would microchip your dog this allows for a quick scan and identification. Thirdly, the best part, they get their very own name. Every wild-born turtle as well as every unnamed head-start turtle over 250 grams gets named. And who names these turtles? Whoever finds the turtle first (this is the handcap we are talking about)! Throughout the season we will keep you posted on all of the turtles we have been honored to give a name. 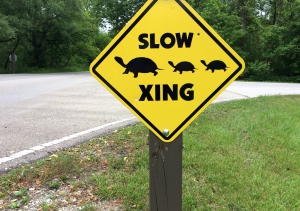 Ever seen a turtle sprint out in front of a car before? They must because why else would there be so many smashed turtles on the roads (sad sigh). A deer? Sure. A bird? Yes. A turtle? Hard to imagine. I can’t tell you the amount of times we have stopped on the way out to our field sites to see if a turtle is alive and unfortunately, most of the time they are not. However, there are fantastic people in this world and thus a story — I was making a trek back to the roadway from tracking a turtle and noticed a truck stopped in the middle of the road. As I got closer, I realized an older gentlemen was trying his best with a stick to move a young snapper off the road. He was dancing in circles around the snapper; each direction he went the turtle simply turned to look at him and snap out. I wish I could have filmed this. When I reached the road he hollered at me to see if I was a “turtle person” and was so thankful I was here to save this turtle! As I picked up the snapper, to much of his surprise, he thanked me and I of course thanked him right back. Please, please, please when you are on the roads BREAK FOR TURTLES! They usually are crossing to find some water to swim in or a spot to lay their eggs. We don’t like to see broken turtles with busted shells.