3 days, 3 people, 1 very successful trip to Indiana. Only a couple days after the school year had finally ended, three members of Team Snake (Kennymac Durante, Dr. Ellen Haynes, and Seth LaGrange) hit the ground running in order to survey the prevalence of Ophidiomyces ophiodiicola (Snake fungal disease) in wild snake populations in Indiana. The goal was simple: find as many snakes as possible and swab them for SFD. Before we left, we made sure we had everything packed. Some of the tools we packed for this trip included items such as: swabs, sample tubes, gloves, snake tubes and hooks, a scale, diluted bleach in a spray bottle, pillow cases and snake tongs. 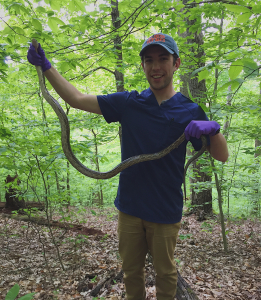 DAY 1: It was very refreshing to finally get out of the classroom and to start exploring new areas to look for snakes. Although we were looking for just about any snake we could find, we had a particular species in mind for the first day of field work: Timber Rattlesnakes (Crotalus horridus). These venomous snakes add a unique level of difficulty when attempting to find them since they blend in with the forest floor extremely well due to the coloration and the pattern of their scales.Despite that, we remained focused, trekked through the forest with caution and eventually found ourselves a breathtaking adult timber rattlesnake basking in the sun.The rattlesnake didn’t display any defensive behaviors such as shaking its rattle but we remained EXTREMELY careful when capturing it. We successfully captured the timber by gently using a pair of snake tongs to lift the snake up off the ground and placing it into a pillow case that surrounded a bucket. Now that we secured the rattlesnake, we could tube it, perform our physical exam, and swab it! The first day out continued to be a great way to kick off field season as we soon found all kinds of other snakes such as: Garter snakes (Thamnophis sirtalis),  black rat snakes (Pantherophis obsoletus), a northern watersnake (Nerodia spidedon), and a Copperhead (Agkistrodon contortrix)!

DAY 2: After a successful first day out in the field, it was time to venture to another site in Indiana to continue our SFD prevalence survey. This site was surrounded by an actively flowing creek with some beachy areas along its banks. No one from Team Snake had been to this particular site yet, so we were all 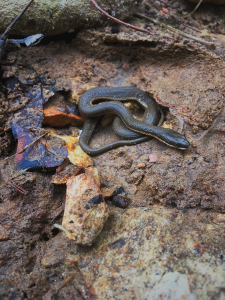 pretty excited to see what slithering friends we could find! The day started off a bit chilly and mostly cloudy, not exactly the best weather for finding snakes. Nevertheless, we remained determined and started exploring the new area. The first 45 minutes wasn’t too eventful as we had only found one baby northern watersnake but little did we know that today would be one of the most successful days for the SFD survey. Once we finally crossed the creek, we started finding a ton of snakes! Underneath logs, within crevices between 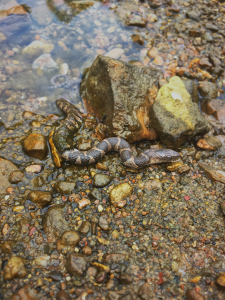 A juvenile Northern watersnake (Nerodia sipedon) resting in the water

rocks, and along the shore next to the creek were all kinds of snakes. We each got a pillow case and started capturing as many as could find. Once we felt like we flipped enough rocks and logs, we each brought our pillow cases full of snakes to the shore in order to set up shop. By the end of the day, we had captured a whopping 26 individual snakes spanning 3 different species, all of which we swabbed and performed physical exams on. The second day of this trip will certainly go in the record books!

DAY 3: Our third and final day took us to one more brand new site. The trip had already proved to be a huge success but our goal remained the same: find as many snakes as possible. This third site was of 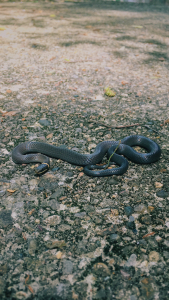 particular interest to us as eastern hognose snakes (Heterodon platirhinos) had been historically found there. A bit sunburnt and fueled with excitement, we grabbed our gear and trekked into the forested area. The third day proved to be a bit more difficult to find ourselves some snakes however. As we searched through the new site, we found a lot of toads, plenty of insects but no snakes. We weren’t going to go home empty handed however so we continued on, farther into the forested area. With enough persistence, we eventually found ourselves 3 snakes. We even got pretty lucky as we found one juvenile ringneck snake (Diadophis punctatus) basking in the sun in the middle of a trail. It soon became time for us to start heading back to our vehicle to drive back to Illinois. As we made our way back through the forest, we all felt quite accomplished with our trip to Indiana. In just 3 days, we were able to find a grand total of 35 individual snakes! Given the success of this trip, we will try to make plans to come back to find even more snakes!

While reading this blog, you might have be wondering “where was Katie during this trip!?” While the three of us were in Indiana, Katie was quite busy in Illinois. Katie was unable to join Team 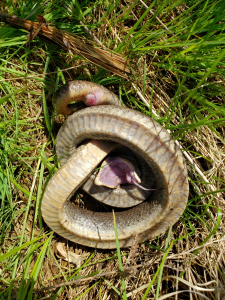 Snake in the field this week, but was busy back at the lab taking care of our snake patients and joining Turtle Team for a day searching for our second favorite reptile- Box Turtles! Be sure to head on over to their blog for more amazing stories from their week and photos of the turtle tracking dogs! While out with the turtle team, Katie found a prairie kingsnake (Lampropeltis calligaster calligaster) and two eastern hognose snakes (Heterodon platirhinos)! Hognoses are one of her favorite snakes to find because of their defensive strategy of playing dead! They will open their mouth and turn upside down to dissuade predators from eating them- pretty cool!