The one where the field season ends

Hello beloved readers! Alexis and Maura reporting live from our lab in Champaign, reminding about the final week in the field. The last week in the field was definitely bittersweet for all! The week started off while Joey and Natalie placed traps at the two final sites of the field season, Alexis and Maura took on the hefty journey of recapturing all of the radio transmitter 2020 headstarts that were released back in July. They were able to recapture the headstarts in about 6 hours! Alexis and Maura went into the day with a calculated plan.  Alexis started off by finding the first head start and performed her exam while Maura went on with Jess to help with telemetry and digging the babies out of the marsh. They then would leap-frog roles until all 15 headstarts were located and processed. Some of the babies were quite difficult to find as they have grown accustomed to hiding themselves in the marsh.

Although Monday was an amazing day of turtle hunting, turtle Tuesday and reptile Wednesday were not as productive. Due to the increase in humidity and heat, the mosquitos had come out as a final goodbye for Alexis and Maura. The final week of the field was certainly sponsored by a high percentage of Deet and Off. As the field season was coming to a close, Bill had the genius idea of placing 3 more traps at different locations in order to uphold the tradition of finding a new Blandings on the last day of the field season. While Natalie and Joey were setting up three fykes, Bill decided to convince Maura and Alexis that the fykes were placed in what Maura and Alexis call  “the long haul.” This specific trapping site requires a lot of coordination as well as endurance in order to pass through what seems like miles of cattails, sticky bottoms, and wader hole poking logs. As you could tell both Maura and Alexis were thrilled. 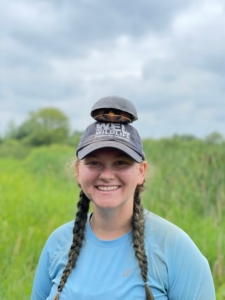 A new female Blanding’s found on the last day of the field season.

Low and behold the final day of the field season arrived! Sadly the original traps placed only caught ONE PAINTED? However, the new traps placed on Thursday upheld the new Blanding tradition. While Alexis waited in the Polaris, Maura and Joey went off to check the first fyke which had luckily recaptured a male Blandings that had not been seen all season! Bill and Natalie checked the second fyke and found a new sub-adult female Blandings! Both Maura and Bill decided to conceal their Blandings, and convince Alexis that the traps were empty. Alexis was overjoyed and a little salty when they both revealed their hidden Blandings back at the Polaris. It was certainly a memorable end to the field season!

Now as they enter the lab work season, Alexis and Maura would like to share what this field season meant to them:

Alexis: “This summer gave me a  chance to continue my work with the amazing and magical Blanding’s turtles. This summer was a combination of learning from last year’s lessons and gaining new lessons through new challenges. I got to see some of my favorite turtles again this year and truly start to feel like we might be able to make a difference in the Kane County population down the road. I will miss this summer’s dream team that balanced fun with hard work is the best way. Thank you Maura for putting up with my constant organizing and then reorganizing. Thank you for taking everything I threw at you in stride and learned and made it your own!   “

Maura: “Having the opportunity to work with an endangered species and spend my summer turtle hunting was likely one of the most transformative experiences I have had thus far in veterinary school.  This summer brought on new challenges and memories that I will always cherish. Being able to help save the population of Blanding at Kane County was certainly a highlight but in reality, my experience was impacted by the people I got to work with. Bill, Natalie, and Joey are some of the most hardworking, dedicated, fun people I have ever had the privilege to work alongside. To Alexis: for putting up with my snoring, mosquito bite itching, and falling asleep with my Friends episodes still playing, you are an incredible human being! I have learned so much about myself and turtles during my time in Kane County and can not wait to start learning more in the lab.” About the Author: Alexis and Maura