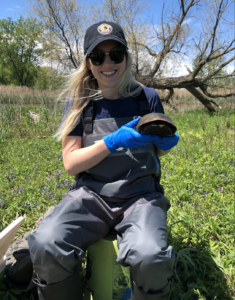 Hello from Cook County! This week we dove right into it by trapping Blanding’s, Sliders, and Musk turtles. Dr. Kaitlin and I kicked off the week with sampling 33 sliders! It was a blast, but we needed an extra hand with all the lab work afterwards so we headed to Kane County and met up with a few other students to get all of it done! We were all tasked with different samples to process to make everything go nice and smoothly. On Tuesday, I met up with two biologists and we went into the field to catch some Blanding’s. Being out there in the marshes and seeing these turtles in their natural habitats was awesome! Once we got them all sampled, we returned them back to where we found them. Since I’m a newbie, I thought I was going to be the first one to accidentally fill my waders up with water while walking through the marshes—but it was one of the biologists that ended up walking back to the car drenched in water from some leaky waders! We returned back to the lab and I had to process all the samples, which was the first time I would be doing it all by myself. It took me way longer than expected, but I wanted to make sure I was doing everything right so I wouldn’t have to repeat any samples in the future!

Wednesday was a super rainy day, but we decided to go to the field during a 2-hour window of no rain to catch the last few Blanding’s we were missing from the population. We realized that was a mistake very quickly! Turns out, the window of no rain wasn’t much of a window at all. We sat out in the marshes, in the pouring rain, freezing our tails off! The biologists quickly realized how cold I was by watching me struggle to even hold a swab. So, we decided to head back and finish a few more sliders that we didn’t get to on Monday.

I met up with one of the biologists at a different site on Thursday to catch one stubborn Blanding that lived in a completely different area of the forest preserve. Well, we were right on time because the Blanding we were trying to catch was just about to cross a busy road! We drove her up a mile north to release her so she could stay clear of the roads. We finally finished up all the Blanding’s from the previous site, and now it was time to move on to sampling musk turtles.

Friday was an incredibly busy day. The biologists caught about 43 musk turtles for me to sample! All by myself! A challenging task! I strolled into the lab at 7am and went right to work. I sampled 19 total for the day and ran all the lab work afterwards. I was extremely determined to get as many turtles done as possible. I have about 24 left to do next week, but hopefully Dr. Kaitlin will pay me a visit and help me out!

It looks like we have a lot of rainy days ahead of us next week, but my goal is to finish the musk turtles and start trapping and sampling some softshell turtles. Let the adventures continue!