Dr. Kaitlin, Chris, and I set up traps on Monday to kick-start the week. Since the weather was looking very iffy for the next few days, we decided that we shouldn’t move our traps to a new location just yet. If a storm were to come through, we knew that our current traps were nice and secure since they have stayed intact for weeks now. On Tuesday, Chris and I went around checking our traps. We kept our fingers crossed, hoping that we would catch another softshell. First 3 traps were a bust – we had absolutely nothing in them…AND the bait was gone. Riddle me that! We then moved on to checking our “lucky trap”, which is set up on a log in the middle of the river. We had 2 giant snappers and a softshell! Unfortunately, the softshell we found was deceased, with the necropsy finding a fishhook stuck in its throat. I then made the hour drive down to Orland park where they had 7 whole softshells for me to sample! The only piece of advice I have for working with softshells is WATCH YOUR FINGERS! Their necks are incredibly long, extending all the way back to the caudal portion of their carapace. I may or may not have ignored this advice for myself with one of the turtles we were working up… and my finger may or may not have gotten too close to their face… but we live and we learn! Oh, and wear a sturdy pair of gloves, their carapace is quite slippery so you need to do what you can to get a good grip on them for sampling! On Wednesday, we decided to pull the traps out since the high for the next 2 days was going to be 100 degrees. We found 4 more softshells that day—HUGE SUCCESS! I was getting slightly worried about getting the numbers I need for my study, but now we have about 3 dozen traps set in different locations around Cook County which is going to make a huge difference. Like I said, these guys are super hard to catch. On Thursday, we only caught 2 softshells out of the 3 dozen traps we have set right now, just to give you guys an idea of what we are working with here! 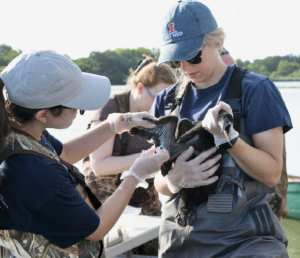 On Friday we got to do something unique to the county. There’s a lake in the county that has an island in the middle specifically made for bird nesting. Egrets and cormorants will nest there in the early summer. Last year, a devastating disease called Highly Pathogenic Avian Influenza (HPAI), also known as the “bird flu”, wiped out over 1,300 birds on that island. We now go out there and test the birds for HPAI, as well as perform health assessments. What is strange yet fascinating is that the disease itself has thrown off their egg-laying timing. Some baby birds we found were fledglings, and some haven’t even hatched yet! Carly, one of the turtle team leaders for WEL, joined me and Chris for this event. We took a boat out into the island and once we docked the boat, we had 30 minutes to test and check-up as many birds as we could. This was to ensure we were not stressing out the parents too much by lingering around the island for too long. We treated ourselves to a nice breakfast afterwards! 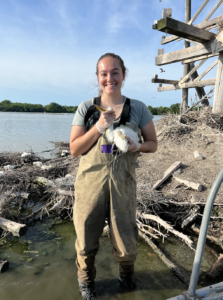 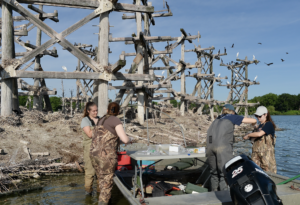 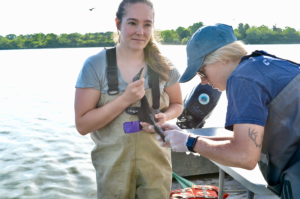 All in all, we had another awesome week of trapping and I’m feeling more and more comfortable working with the softshells every day! Next week, I will be flying to Poland for a wedding, so Carly, Maris, and Dr. Kaitlin kindly offered to take over my traps until I am back.