Everyone Loves a Good Crossover Episode

One of the best things about working with wildlife is that you never know what the week is going to throw at you. This past week Maris and I took a break from our work in the lab at school and headed up to the Chicagoland area to join the other turtle teams. We started the week with Caroline and Varun working on tracking head-started Blanding’s turtles in Lake County. On Monday, equipped with duct-taped waders and $6 slip-on water shoes from Walmart and running on the Cosmic Brownie I had for breakfast, I was pumped to spend some time in the swamp. That was until the swamp promptly swallowed up both of my shoes never to be seen again. So now, armed with only my neoprene footy-pajama style waders and a guilty-conscience from accidentally polluting the wetlands, I was ready to find some turtles. And find turtles we did! Using radio-telemetry, Varun and I tracked one tiny turtle to the middle of a pond, trekked through the reeds to find another, and scrambled down an embankment to find the 3rd turtle posted up on a log. We performed some health assessments and logged locations for all the turtles, giving the Lake County crew valuable information on the turtle’s movement and health status. 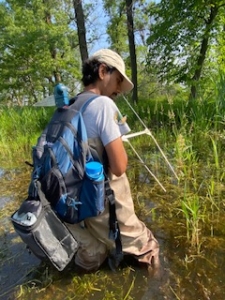 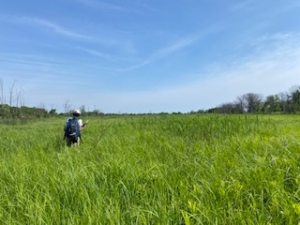 After finishing up lab work for the day, Maris and I reunited to make our way to the campsite where Dr. Kaitlin Moorhead, a fellow WEL member, was letting us crash for the night. After arriving at the campsite, Maris and I decide to go get some Chipotle and ice cream as a reward for a successful first day. Sitting at Chipotle, our victory snack was interrupted by a thunderstorm rolling in. Determined not to let anything take away our ice cream trip, we left the shelter of we decide to make a break for the truck to decide our next move. By the time we had jumped in the truck, it was raining so hard there was minimal visibility. Undeterred, we set our metaphorical sights on the Baskin Robbins on the other side of the parking lot. Somehow in the 100 yard drive, the weather became exponentially worse with wind strong enough to start to rock the lab truck and the faint sound of tornado sirens in the background. We were prepared to make a mad dash into the Baskin Robbins to get out of the storm when a HUGE piece of hail (Maris says it was smaller than a dime but it looked big to me) hits the window of the lab truck. No way I was getting out of the truck now! So Maris and I faithfully waited over an hour in storm but luckily we were not swept away in a tornado and we still got our ice cream. 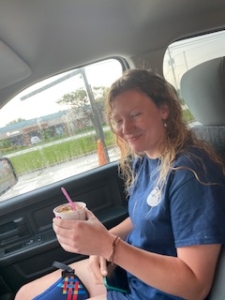 The next day we set back out into the swamp, helping Caroline and Varun locate headstarts in one of the Lake County ponds. Equipped with boots this time, I was feeling confident about the day ready to face the 100 degree heat. The day got off to good start, spotting a gopher snake and a pair of sandhill cranes on the route to the pond. The luck quickly turned around as Varun lost his phone in the water, all the headstart turtles were MIA buried deep in the mud and tangled in reeds, and to top it off the sole of my boot ripped completely off flooding my poor waders and making me about 2 inches taller on my left side. Exhausted, we headed back to Champaign after finishing the lab work  feeling a little defeated by the tiny turtles and the blazing heat. 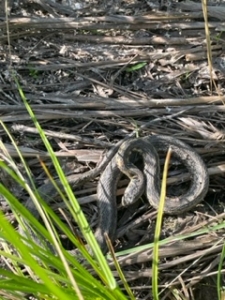 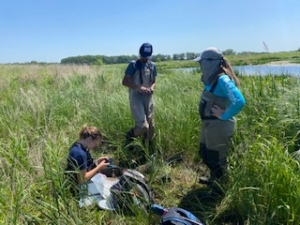 On Friday, I got my chance for redemption joining Kami in Cook County on a morning trip out to a rookery doing HPAI testing on young egrets and cormorants. The third time was a charm for my boots and waders and I made it through the day with all pieces of my outfit still intact! With all the mishaps of this week, it would have been easy to write off as a massive fail. But as I was telling Varun after losing my shoes on day 1, “this is the kind of ‘type-2 fun’ where everything ends up making a good story later”. For me, a big part of my journey into and through vet med has been all about reframing how I view success. The biggest take away for me this week was the fact that despite being the living embodiment of Murphy’s Law, I still had a great week improving the health of wildlife and had an absolute blast getting to work with the other members of our lab. Because everyone loves a good crossover episode 🙂 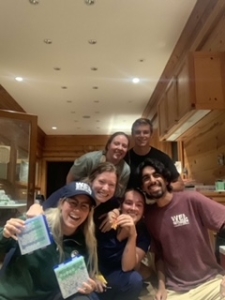