On Tuesday, Dr. Kaitlin and I ventured out into the rivers of Cook County to set up our traps for the week. It only took about an hour, so we were free for the rest of the day! Chris, the biologist for Cook County, invited us to help him with osprey tagging. The best part about working with wildlife is that you never know what species you’re going to work with that day. When we arrived at one of the osprey nests, Chris got a call that one of the Elk’s under his care was bleeding. We hopped in the truck and drove across the street to check out what was going on with Mr. Elk. There calls are actually quite common during this time of the year. Elk, like many species with antlers, re-grow their antlers every year. After all, they are the fastest growing bone in the world! The “fuzzy” appearance of antlers as they grow is called velvet, which is a vascular-rich tissue that helps supply blood to the antlers. Once the antlers are done growing, the velvet is rubbed off on trees and branches to expose the bone underneath. Rubbing off this velvet does not harm or hurt the elk itself, but it can result in a bit of bleeding. Once we determined that the elk was alright, we headed back to the osprey nest. One of the biologists was lifted up to the top of the nest to retrieve the 1 baby osprey that was in it. We drew blood, tested it for HPAI, and tagged him quickly. He was then placed back into his nest and we watched as the parents greeted him back home. After that, we got invited to help tag baby kestrels! We made our way up to Kane County where we met up with another team of biologists to help go through the same exact process as the osprey tagging. It was SO cool to help out with multiple species just in one day! 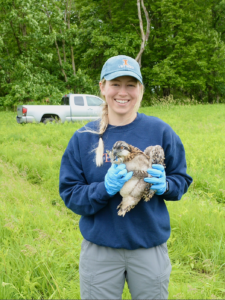 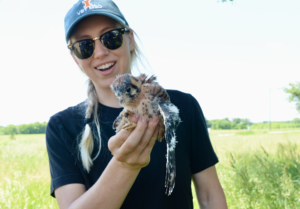 On Wednesday we had a special guest joining us to check traps in the hopes of finding a softshell—the one and only, Alexis! Alexis spent two whole summers in Kane County conducting her own research on snappers. She helped us check traps and you will NOT believe what we found… the TINIEST turtle of them all! An 8 gram slider! Not to brag, but I’m currently winning the lab’s “largest snapper” competition AND “smallest turtle” competition. We took pictures with it and then let him go. Unfortunately, we did not catch any more softshelled friends that day. 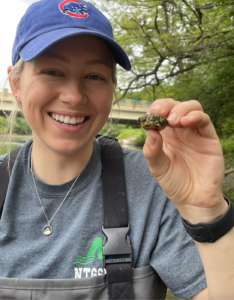 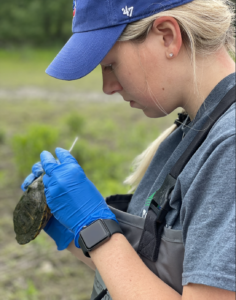 On Thursday, we had another day of no softshells. Bummer! Chris and I decided that we were going to give these traps another week, but that we should start thinking about moving the traps to see if we have better luck downstream. I’ll have to spice up my research to make sure we are setting traps in the most ~ideal~ locations along the river. Ironically, on my run that afternoon I saw a softshell turtle on a log basking in the sun. Man, if only I had my waders with me! I guess now I know where my next trap will be set! 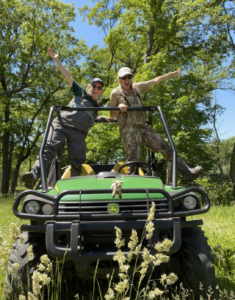 On Friday, we got ONE SOFTSHELL!! WOOHOO! We were SO excited about this one! We worked quickly and efficiently to get this turtle sampled and send him on his way back into his river habitat. This fella was in a particularly foul mood today and made swabbing very difficult, but we managed to get everything done in the nick of time. I got a call from one of the biologists located in Orland Park – he said he trapped a softshell and wanted me to drive over and sample it! I hopped in my car and headed over there as soon as we were done checking traps. That’s TWO softshells in one day! Just what I needed to end the week. Did you know that you can tell the difference between a spiny softshell and a smooth softshell by looking at their nose? Spiny shoftshells, the species I am catching, have a barb that goes through their septum (the cartilage that divides both your nostrils). Smooth shoftshells, which are endangered, do not have this barb. If we catch any smooth softshells, we’ll have to make a few calls! I went home and ran all of the bloodwork myself, which didn’t take long since it was only two samples. My mom even paid me several visits to check up on me and ask when I was going to come inside to eat dinner. “Mom, I still have 20 minutes left on ESR and I’m spinning down plasma, it’ll be 30 minutes before I come inside for dinner”. She literally had no idea what I was talking about, but she laughed and walked away. Eating freshly made tacos after a day out in the field hits the SPOT!