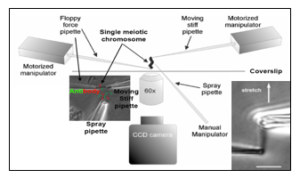 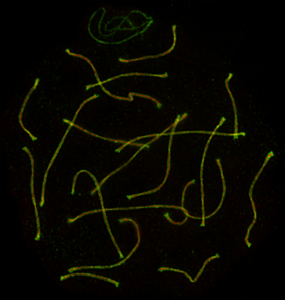 2. The roles of SUMOylation in meiotic checkpoint pathways 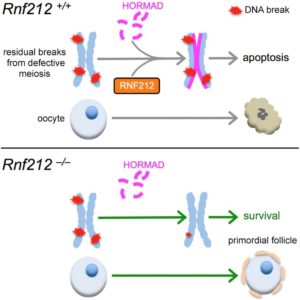 We show that RNF212, a SUMO E3-ligase, functions in oocyte quality control. Both physiological apoptosis and the wholesale elimination of oocyte pool in meiotic mutants require RNF212. Our data indicates that RNF212 impedes DNA DSB repair when homologous chromosomes separate by blocking recombination between sister chromatids. Consistently, HORMAD1, a negative regulator of inter-sister recombination, requires RNF212 for its association with separating chromosomes. We infer that by blocking the repair of residual DNA DSBs, oocytes retain a “memory” of defective inter-homolog interactions that enable quality control processes. Together, these results define the logic of postnatal oocyte quality control and suggest that RNF212 variants may influence the transmission of defective genomes.

The long-term goal of this research project is to understand how post-translational modifications, such as SUMOylation (Small Ubiquitin-like Modifier) and ubiquitination, regulate a range of checkpoint pathways in mammalian cells. We will utilize many experimental methods and techniques, such as single-cell RNAseq, mouse genetics, proteomics, electron microscopy, super-resolution microscopy, and spermatocyte/oocyte culture.

This work has the potential to uncover fundamental molecular mechanisms that will provide insights for developing treatments for infertility, miscarriage, birth defects, cancer, neural degeneration, and aging-related diseases.

3. The effects of environmental toxicants on meiosis

Meiosis is crucial for sexual reproduction. Many environmental toxicants, such as endocrine disrupting chemicals (EDCs), disinfection by products (DBPs), and per- and polyfluoroalkyl substances (PFAS), disrupt meiosis and induce infertility, miscarriage, and chromosomal birth defects. These disruptions could affect several generations in a multigenerational and/or transgenerational manner. Unfortunately, it is impossible for us to remove these chemicals from our environment in the near future due to their ubiquity and stability. Understanding the molecular mechanisms of how these factors exert toxic effects is critical for developing effective therapeutic strategies to prevent the aforementioned harmful outcomes. In addition, our studies can help government agencies such as the U.S Environmental Protection Agency set legal limits on these chemicals. Using in vitro prenatal ovary and oocyte culture, we are able to investigate the effects of various environmental toxicants on the meiosis and oocyte maturation. 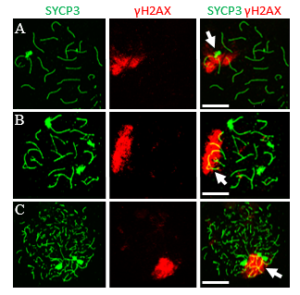 We have demonstrated that two environmental factors, phthalate and a high-fat diet, can synergistically impact oogenesis and folliculogenesis. The oocytes from F1 fetal mice experienced elevated abnormal gene silencing in certain chromosomal regions after the pregnant F0 dam was treated with both a high-fat diet and di-(2-ethylhexyl) phthalate (DEHP). After birth, the development of preantral follicles was also affected by the DEHP-and-high-fat-diet combined treatment. Our data suggests that pregnant women could carefully choose their diet to avoid adverse multigenerational effects caused by DEHP.

We also studied another environmental pollutant, iodoacetic acid (IAA). IAA is a byproduct of the disinfection process of our drinking water. We found that IAA adversely affected oocyte maturation process by elevating ROS levels, disrupting spindle assembly, inducing DNA damage, and causing MI arrest, which poses risks to female reproductive health. We also showed how an antioxidant, N-acetyl-L-cysteine (NAC), could rescue IAA-induced abnormalities in mouse oocytes, indicating that oxidative stress is a major cause of oocyte maturation failure after IAA exposure.